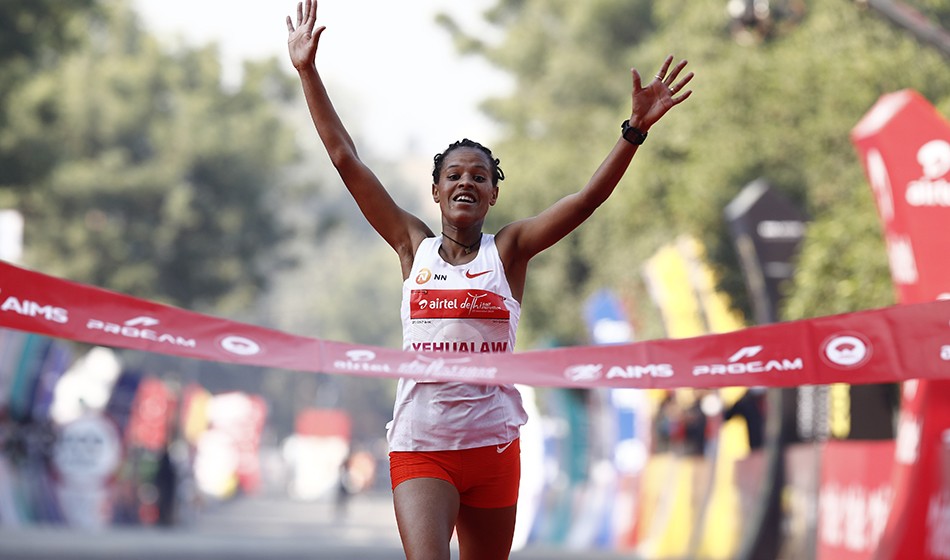 Ethiopia’s Yalemzerf Yehualaw and Amdework Walelegn both went two better than their third-place finishes at last month’s World Athletics Half Marathon Championships as they won at the Airtel Delhi Half Marathon in fast times on Sunday (November 29).

Yehualaw clocked 64:46 for the second-fastest ever women’s half-marathon on a record-eligible course, while Walelegn won the men’s race in 58:53 as the top three all broke 59 minutes.

Kosgei dropped out during the eighth kilometre, holding her leg as she limped to the side of the road.

Yehualaw continued to run strongly and won in 64:46, with Chepngetich finishing second in a time of 65:06 which moves her up to equal sixth on the world all-time list.

“My training since the world championships told me that maybe I could break the course record as I ran 65:19 there, but this was more than I expected, and I hoped for a win here after just losing by a second a year ago,” said Yehualaw.

“My plan was to push hard with two kilometres to go and that helped my fast time, and it was also very nice weather.”

To comply with health-related measures, this year the elite-only races saw athletes compete on a new course. They covered around 4.5km, starting at the Jawaharlal Nehru Stadium, and then took on on two loops of approximately 6km, before returning to the finish outside the stadium by the same route.

An event record was also set in the men’s race, as Walelegn outsprinted his fellow Ethiopian and two-time defending champion Andamlak Belihu to win by just one second. 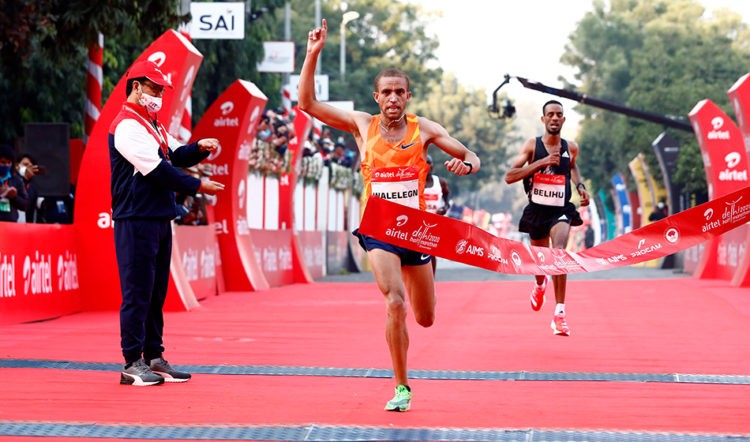 The 15km mark was passed in 42:00 and six athletes remained together at 18km, with Ethiopia’s Belihu and Walelegn joined by two-time world 5000m champion Muktar Edris, making his competitive debut over the distance, plus Tesfahun Akalnew, Kenya’s Leonard Barsoton and Uganda’s Stephen Kissa.

Belihu, Walelegn and Kissa passed 20km in 55:59 before a close finish saw Walelegn win by a single second from Belihu, with Kissa just a further two seconds back.

“I had a few bad patches but in the final kilometre I felt strong. I was second in Delhi in 2018 and this is a much faster course which has less sharp turns,” said Walelegn.

Edris clocked 59:04 for fourth place and the second fastest ever half-marathon debut, while Avinash Sable smashed the Indian record by more than three minutes with his time of 60:30 which placed him 10th in the race.