Victory for Maria Vicente at European U20 Championships 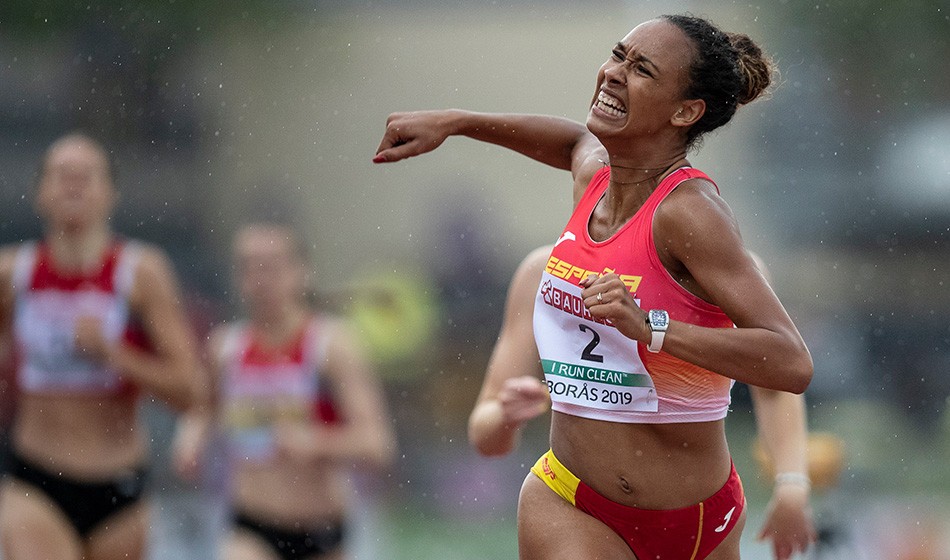 Spain’s Maria Vicente secured a third successive major age-group heptathlon title in Sweden, adding victory at the European Under-20 Championships to her under-18 wins at world and European level.

With a national record score of 6115 points, Vicente won ahead of Ireland’s Kate O’Connor and Switzerland’s Annik Kälin, with British team co-captain Holly Mills finishing fourth after her own PB performance.

Just 46 points separated the top three, with O’Connor improving her Irish record to 6093 points and Kälin setting a PB of 6069 points.

Mills improved her PB to 5802 points, while GB team-mates Amaya Scott-Rule and Olivia Dobson placed 7th and 16th with a PB of 5486 points and a tally of 5209 points respectively.

Vicente had led the competition ahead of Mills at the end of the first day but a 6.30m leap saw the Briton regain the lead after the long jump before moving to fourth after a 32.73m throw in the javelin.

“I’m extremely happy. It’s been a really tough competition,” said Vicente. “I’m glad I finished strong, even broke my PB, because I just came back from an injury in the last few weeks. Now I can really enjoy this moment.”

After her 2:24.17 800m, Mills said: “I went through in the time I needed to (at 400m) but I went to kick, and it just wasn’t there. It’s the first time it has ever happened that I haven’t been able to kick. I took a risk and it didn’t pay off, but I wouldn’t change it because I wouldn’t have wanted to run the first lap any slower.

“This is my second ever heptathlon so to come here among Europe’s best athletes has been a great two days. It’s been a competition of highs and lows, but I’ve enjoyed it. There’s room for so much more improvement but on my second heptathlon I’m so much closer to 6000 points, so I can’t complain too much.”

What an INCREDIBLE conclusion to the heptathlon in #Boras2019! 🙌@MVicentePodium runs the 800m of her life in the pouring rain to win the European U20 title in a Spanish record of 6115 points. 🥇 pic.twitter.com/nJjUCxQRu1

There was double sprint success for Italy as the nation claimed a 100m double through Lorenzo Paissan and Vittoria Fontana.

First, Paissan won the men’s title in 10.44 (0.0m/sec) from Poland’s Antoni Plichta with 10.52 as Chad Miller claimed Britain’s first medal of the championships, clocking 10.53 for bronze.

His fellow Briton Jeremiah Azu – the pre-race favourite – pulled up with a hamstring injury.

“I am really, really happy,” said Miller. “It is a battle. At championships you don’t look for times, you look to fight, it’s war.

“I got out well, didn’t have the best transition but as I said, it’s war. I can’t even remember it. I was fighting to get back and then I just went in for the dip. I didn’t know where I came – but third I’ll take.

“Bronze is very special, it is my first Great Britain medal. I wanted gold but I thank God for everything – first or last. I wasn’t healthy a few weeks back so I just have to take things as they come and keep rolling with it.”

Pre-race favourite Jeremiah Azu pulls up injured with a hamstring injury and Lorenzo Paissan comes through to win gold for Italy.#Boras2019 pic.twitter.com/pgIpIVAeUk

Then, Fontana also secured success in the women’s event, setting a national under-20 record of 11.40 (+0.8m/sec), the same time as N’ketia Seedo ran in second.

Aleh Tamashevich of Belarus won the men’s shot put with 21.32m as GB’s Lewis Byng placed eighth with 18.70m, while Alida van Daalen of the Netherlands won the women’s discus with 55.92m, 30 years after her mother Jacqueline Goormachtigh won bronze at the 1989 European Junior Championships.

Seamus Derbyshire (52.20) and Alastair Chalmers (52.69) also safely made it through to the 400m hurdles semi-finals, together with Marcey Winter in the women’s event after clocking 59.19 for second in her heat.

There was a GB one-two in the second women’s 800m heat as Isabelle Boffey ran 2:05.22 to lead team-mate Keely Hodgkinson home. There will be three Brits in the final as Sarah Calvert qualified as a fast loser.

British co-captain James Tomlinson made the discus final with a throw of 58.14m, while Charlotte Williams auto-qualified for the final of the women’s hammer with a mark of 61.01m and she will be joined by team-mate Charlotte Payne who threw 58.92m.

Switzerland’s Simon Ehammer leads the decathlon at the end of the first day thanks to his 4317 points ahead of Germany’s Leo Neugebauer (4061) and Maximilian Kluth (4033).

Britain’s Joel McFarlane and Jack Turner are 11th and 20th respectively after the first five events.

Results can be found here, while a day one round-up is here.