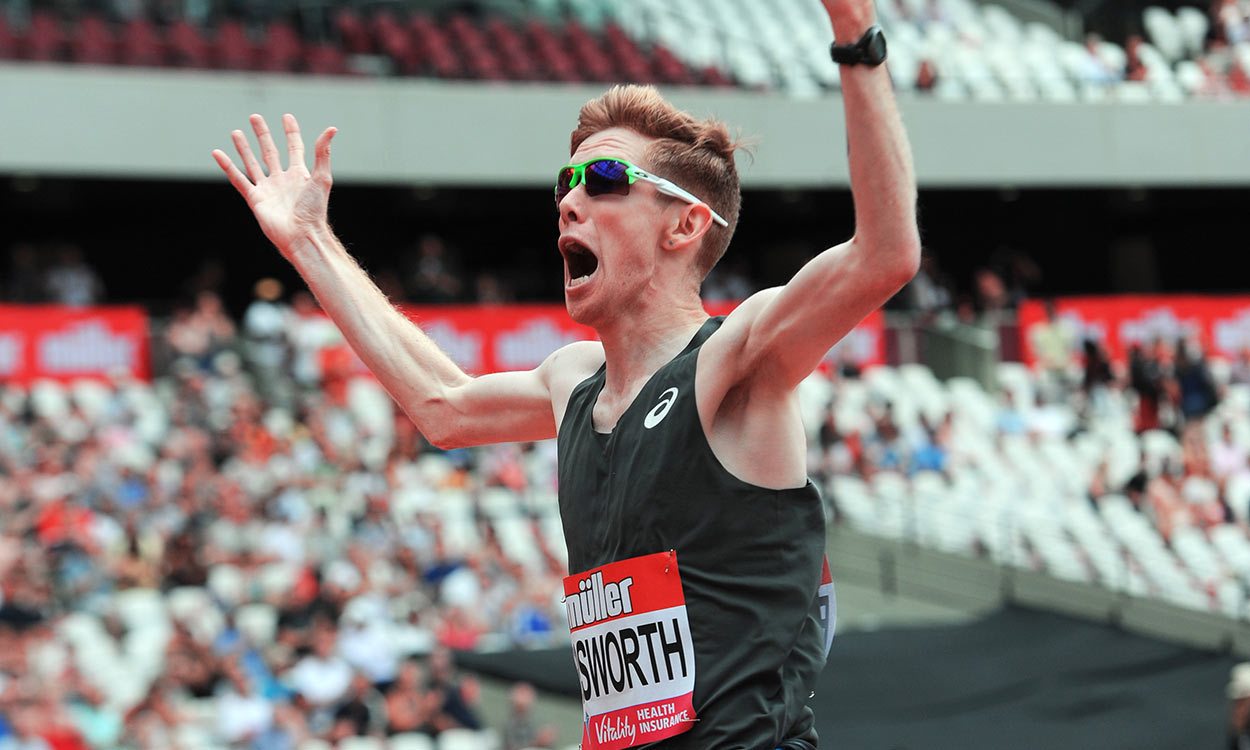 A world record for Tom Bosworth, wins for Chris O’Hare and CJ Ujah and a big PB for Elliot Giles at the Müller Anniversary Games in London

Further impressing as he works towards the 20km event at the IAAF World Championships next month, the 27-year-old clocked 5:31.08 to improve the global race walk mark.

World junior champion Callum Wilkinson had led through 400m in 82.45 to be bang on schedule. Bosworth took over on the second lap and reached 800m in 2:45.72 before he began to ease away.

On the third lap, Bosworth picked it up further with a 81.54 lap but did get two warnings and it looked like he eased back on the last lap to ensure he didn’t get disqualified.

Despite slowing, he still smashed the record and had time to acknowledge the crowd before he crossed the line, celebrating wildly.

After the race, Bosworth said: “That record is 26 years old and I was so nervous. Not many can run a mile in 5:31 so I am pleased to walk that quickly. I knew my speed was good but I think I have upped my level this year.”

It was deemed the performance of the meeting and earned Bosworth a world record bonus of $15,000.

With the judges busy on the later laps, it was Diego Garcia (5:36.27) who was given second place.

Erick Barrondo and Wilkinson (5:36.31) were both disqualified but would have set big PBs had they not broken the rules.

Tom Bosworth was understandably delighted with his world mile race walk record in London today. He spoke with AW after the race… Check out the #AthleticsWeekly website now and next week’s #AW magazine for coverage #racewalk #recordbreaking #worldrecord #athletics #tombosworth #video

Another British winner other than Mo Farah (report here) on a great day for Britain’s male endurance athletes came in the 1500m.

Last week Chris O’Hare showed his prowess over 1500m in a slow-run race at the British Team Trials and he followed that up with another classy victory.

Filip Ingebrigtsen went ahead on the final bend as Grice lost ground and as the crowd roared, it was O’Hare who finished strongest to edge ahead in the last 10 metres to win in 3:34.75 from the Kenyan’s 3:34.88. Grice was fifth in 3:36.29.

The winner said: “I came off the bend and had a lot of work to do but the crowd lifted me.”

Back in fifth, Elliot Giles confirmed his London selection with a 1:44.99 PB in fifth after his trials win. As the trials runner-up, Guy Learmonth’s 1:45.77 PB, though back in 10th, ensured he will join Giles.

The three Britons were close with Nethaneel Mitchell-Blake (20:30) just edging Zharnel Hughes and Daniel Talbot (both 20.33).

CJ Ujah bounced back from his trials withdrawal and his 10.02 100m win, equalling his season’s best, surely confirmed his place in the London team. James Dasaolu was second in a season’s best 10.06.

World record-holder Aries Merritt showed his form is improving week by week after his kidney transplant as he won the 110m hurdles easily in a season’s best 13.09. David Omoregie won his heat in 13.43 but only ran 13.70 in the final. Andy Pozzi withdrew before the weekend due to injury.

In the 400m hurdles, it looked like world-leader Kyron McMaster was going to run in the low 47s as he entered the straight with a big lead but he stumbled off the eighth hurdle and lost all rhythm for the final hurdle. It was Olympic champion Kerron Clement who finished the strongest and came past just before the line to win in a season’s best 48.02 to McMaster’s 48.12.

The long jump was a relative disappointment with Greg Rutherford’s withdrawal and was dominated by Olympic champion Jeff Henderson with a pair of 8.17m jumps.

The non Diamond League 400m was also a disappointment in terms of time and home favourite, Matthew Hudson-Smith, fell at the start and failed to finish though he reported there was no major problem and it was just a slip.

American Michael Cherry finished the strongest and won in 45.02 though Dwayne Cowan also finished well to run 45.36 and surely earn his selection for London.

Rabah Yousif (45.94) just pipped Martyn Rooney (45.99) for fifth place. Rooney had the consolation of receiving his 2008 Olympic bronze medal with the rest of his team after the event.

The discus also lacked the expected distances but made up for it in terms of excitement. World-leader Daniel Stahl led the opening round with 65.63m, but had dropped to third at halfway despite improving to 66.23m.

At this stage Fedrick Dacres led Philip Milanov by a single centimetre with 66.66m and that was still the order in the final round when Stahl showed his competitive streak to edge ahead with 66.73m.

Dacres and Milanov had one final chance to respond and though over 65 metres they couldn’t deny the giant Swede. Just eight centimetres covered the trio.

Sole Briton Zane Duquemin was ninth with a throw of 59.56m.

David Weir made his last appearance on the track in a brilliant Paralympic career though the T54 800m race was rather a non event as Weir won unchallenged in 2:02.37.

» A report on Mo Farah’s 3000m win can be found here, while coverage of the women’s events is here. See the July 13 edition of AW magazine for eight pages of reports, pictures and results from the Müller Anniversary Games