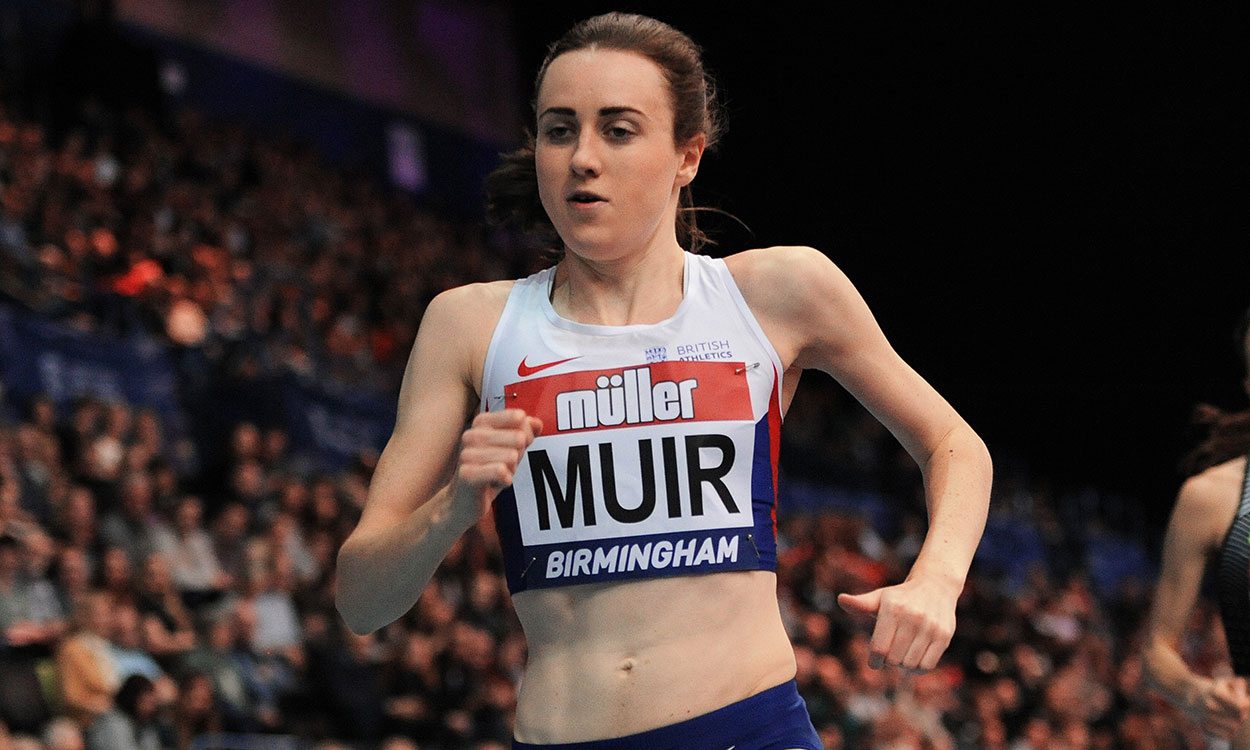 The ‘lucky spikes’ did it again. In the same shoes which had taken her to British records, a European record and Diamond League success, Laura Muir rose to the occasion once more as she responded to the raucous crowd to break yet another mark at the Müller Indoor Grand Prix.

Another of Dame Kelly Holmes’ British records – as well a further European best – have now fallen to the 23-year-old who is yet to put a foot wrong in 2017. This time, in Birmingham, it was the 1000m indoor record to go, Muir’s time of 2:31.93 ducking under Holmes’ best of 2:32.96. She wasn’t exactly far away from the current world record of 2:30.94, either, producing the second-fastest run of all time over the distance.

A clearly painful closing 200 metres, Muir stretching every sinew having been expertly led out initially by pacemaker Jenny Meadows, proved just enough and the Scot will now fine tune her preparations for racing both the 1500m and 3000m at next month’s European Indoor Championships in the finest of fettle. After all, she now craves a first senior medal to go with all the records.

“I am delighted – I really wanted to get the win, that was really important,” said Muir, who beat Holmes’ long-standing 1500m outdoor British record last summer and has also broken the British indoor 5000m and European 3000m marks this year. “To beat Kelly’s record is amazing and to be so close to the world record is also very encouraging for me.

“The crowd were so loud; I couldn’t hear myself breath. To have this level of support is something I am very grateful of and the fact that we will have this in London for the World Championships later this year will be a great advantage for all the British athletes.

“It is every athlete’s dream to be running well every time you come out on the track and being injury free. Hopefully I can carry this sort of form into the summer. I’ll be going for my first senior medals at the Europeans – that is what I am targeting.”

As for her choice of footwear, Muir added: “I have worn my lucky spikes for all four of my national records so I am going to keep them safe for the future! They will be worth a bit now.”

Another woman on impressively speedy form was Jamaican sprinter Elaine Thompson. In the absence of the injured Dina Asher-Smith, the 100m and 200m Olympic champion looked ominously good in winning her 60m heat and, in the final, she scorched her way to victory over the new track at the Barclaycard Arena to record a PB of 6.98, a stadium record.

Back on the oval, Muir was not the only Scot to hit new heights during the afternoon. In the 3000m, fifth-placed Eilish McColgan overcame illness to record a PB of 8:43.03 – moving up to sixth on the British all-time list for the distance indoors in the process – while Steph Twell also notched a PB of 8:45.95 in finishing 10th. The race was won by Kenyan Hellen Obiri in a national record-breaking time of 8:29.41, while runner-up Sifan Hassan smashed the Dutch record in a time of 8:30.76.

Eilidh Doyle was outshone in the 400m by an impressive run from from fellow Brit Laviai Nielsen, who secured a significant sub-52 seconds PB (51.90) in finishing second to Czech Zuzana Hejnová (51.77). America Shamier Little was third in 52.11, with Doyle fourth in 52.33.

In the long jump, Britain’s Lorraine Ugen and Jazmin Sawyers picked up where they left off at the British Athletics Indoor Team Trials a week ago. The pair pushed each the whole way and, as in Sheffield, it was Ugen who came out on top – her leap of 6.76m, which was a season’s best, securing top spot ahead of British bronze medallist Sawyers’ 6.71m indoor PB.

» Results can be found here, with a report on the men’s events – including a European record-breaking 5000m by Mo Farah – here. See the February 23 edition of AW magazine for full coverage