The rise of running in Barbados 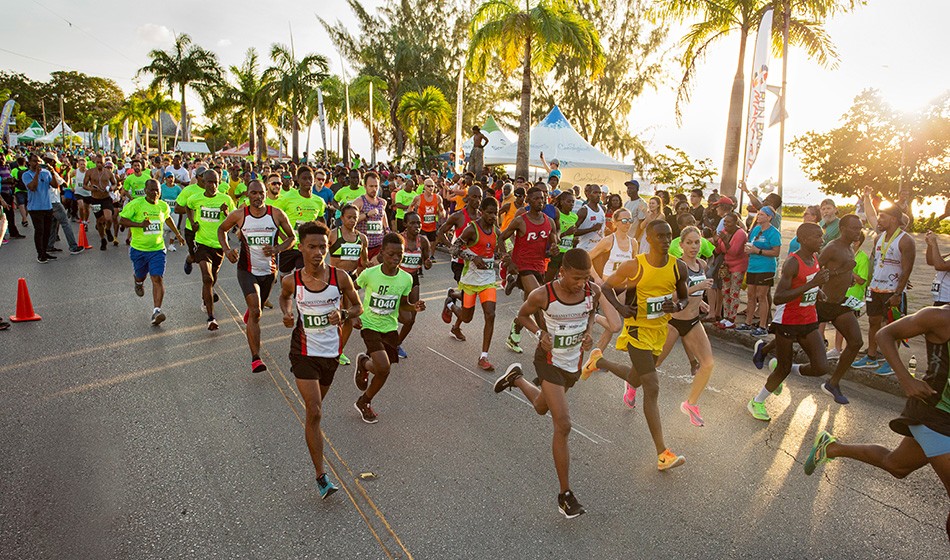 The Run Barbados Marathon Weekend has enjoyed a boom in participation levels over the past couple of years, with runners from around the world travelling to the Caribbean island for an active holiday.

It’s easy to understand why. Particularly at this time of year in a cold and wet UK, when many will be planning their race calendars for the year ahead, an escape to the Caribbean climate in December sounds incredibly appealing.

Having started out as a 10km and marathon created by locals Sir Austin Sealy and Carl Bayley in 1983, the annual event – which took place for the 37th time from December 6-8 – has evolved into a three-day festival with a half-marathon, 5km, fun mile and 5km walk also on offer.

A total of 2765 participants from 23 countries were involved in the latest edition and I was among them, as one of 154 entries from the UK to have travelled to the idyllic island which is just 166 square miles in size. It can take just three hours to drive around the whole island, which left me wondering how long it might take to run it …

My first experience of the Run Barbados Marathon Weekend came in 2017. Since then the event has grown and some changes have been made, such as moving the fun mile to start and finish on the famous Bay Street Esplanade, located along Barbados’ west coast and just south of the capital city of Bridgetown.

This is also the start and finish area for all the other events, with the Signia Globe Fun Mile taking place on the Friday evening before the Cave Shepherd VISA Credit Card 5K, Colombian Emeralds International 10K and Ganzee 5k Walk on the Saturday afternoon and then the Cave Shepherd & Co. Marathon and Fortress Half Marathon on the Sunday morning.

Bridgetown and its Garrison is a UNESCO World Heritage Site and the routes take runners under the Independence Arch, over the Chamberlain Bridge and through the city. The marathon and half-marathon course continues along the west coast with views out to Carlisle Bay once the sun is up, with those races starting at 5am to take advantage of slightly cooler conditions. The marathon is two laps of the half-marathon route on partially-closed roads.

The marathon and half-marathon are the final events of the busy Run Barbados Marathon Weekend programme. Starting at 5am local time, the temperature is a cooler 26C and there’s a gentle breeze on the Bridgetown esplanade @RunFunBarbados @Barbados pic.twitter.com/sOmJfiQuSR

One of the big draws of Run Barbados is that it offers multiple events over three days and organisers have created ‘challenge medals’ to encourage runners to take on a range of races.

Inglis was among the ‘silver challenge’ runners as she competed in the mile, 10km and half-marathon, winning the women’s mile in 5:01 and completing a half-marathon hat- trick in 82:16, as well as finishing second behind Canada’s Natasha Wodak in the 10km in 36:20.

Other challenge medals on offer are the ‘bronze’ for those running the mile, 5km and half-marathon and ‘gold’ for those taking on the mile, 10km and marathon.

“We can offer people three days of fun,” says event director Zary Evelyn. “You can come here and make it a part of your holiday. There’s something for everybody.” 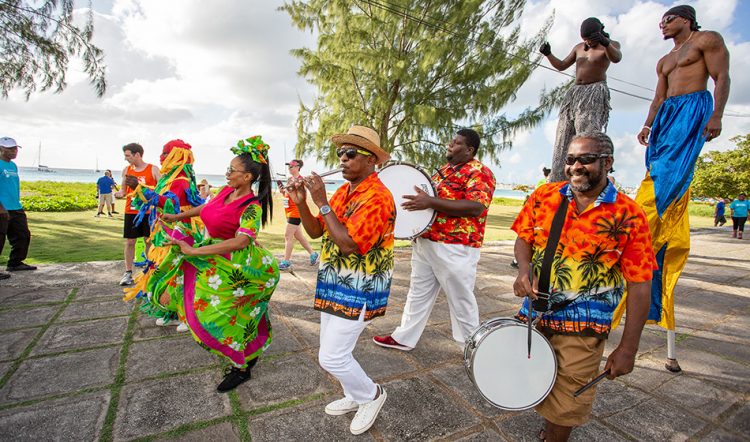 In 2019 the UK contingent was the third-largest at Run Barbados after local Barbadians and their Caribbean neighbours from Trinidad. The 2018 edition was the biggest yet, with entries also exceeding 2700.

Evelyn says the people of Barbados have embraced the event.

“They know it is aimed at tourism so that, for it to be sustainable, tourists have to come here for it,” he explains.

“There is an avid running crowd here, especially for shorter distances like 5km and 10km.”

If running in beautiful Barbados wasn’t reward enough, extra appeal comes in the form of the event’s prize pot and offer of a return trip for winners.

Sarah Inglis is based in Canada and attends the race weekend as part of the Canada Running Series community but, since visiting the island for the first time in 2017, she has actually won each of her return trips.

“Our prize money is the biggest in the Caribbean. It’s just over $25,000 USD,” explains Evelyn. “We have prizes for the top locals as well as international runners.” 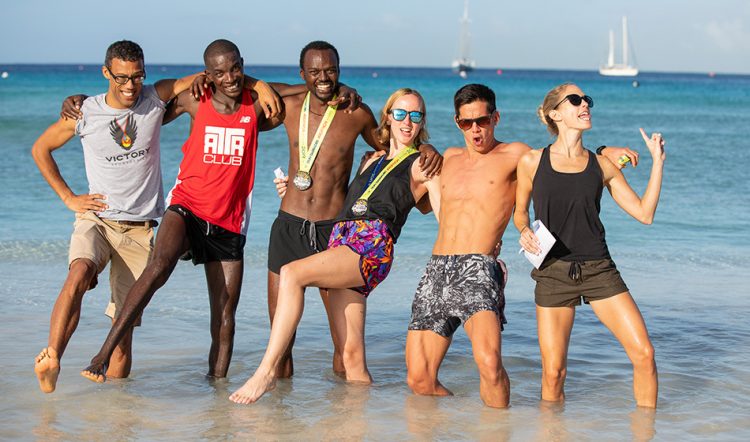 Marathon prize money in Barbados dollars includes Bds$4,000 each (around £1500) for the winners plus return airfare and hotel for the following year’s event, while for the half-marathon and 10km the top prizes are Bds$2,000 and Bds$1,000 each respectively and a return trip.

“It’s a huge incentive,” says Inglis, who claimed joint half-marathon victory in 2017 before winning in 2018 and 2019. “Every year I hope to pull it off and win to guarantee the trip back the following year.

“There’s probably no race like this anywhere in the world where you can finish and the beach is right behind you. It’s really beautiful to race here.

“You can put in a nice week of training, some easy runs, a couple of races and then reset coming into Christmas and new year,” she adds.

“You come and you race hard but you also have a really good time. You can also enjoy some rum punches after the race!”

Interview with @SarahInglis5 as she ends a successful year in style by completing a @RunFunBarbados half-marathon hat-trick in 82:16. It comes after she won Friday evening’s mile and was second in Saturday’s 10km @Barbados @scotathletics pic.twitter.com/sQZCNF8xYc

My Run Barbados experience started with picking up my race numbers and T-shirts for the mile and 5km. This was quick, easy and friendly, and the location of race HQ at the Courtyard by Marriott in Bridgetown was close to where I was staying at the Coconut Court Beach Hotel, as well as the race start and finish area, which was just a 20-minute walk away.

Friday evening’s mile offers a great festival feel, with music, dancing and fancy dress. With the 5km and 10km races taking place the following afternoon, conditions are hot, but there are a number of water stations and I adjusted my pace accordingly as I wound my way through Bridgetown’s streets.

Blogger and ASICS FrontRunner Rebecca Burns was among those taking on the half-marathon and told me the 5am start was welcomed to escape the heat of the day. “The timing equates to 9am GMT which ideally fitted with my somewhat jetlagged body clock,” she says.

“The race consisted of an out and back route which between 6-15km was undulating, so be prepared for hills! Some areas of the route were quiet so it’s a mental challenge as much as a physical one,” she adds.

“The organisers provided frequent water stations also stocked with bananas and there were marshals in abundance, with many on the course on bikes. There were even locals offering tequila shots and rum punch should you feel inclined! A true taste of Caribbean hospitality.”

The Run Barbados slogan is ‘Come for the run, stay for the fun!’ and there are so many other things to see and do on the island while you are visiting.

» Paddle Barbados
Swap the paths for the ocean and try a stand up paddle boarding lesson or tour near Carlisle Bay. paddlebarbados.com 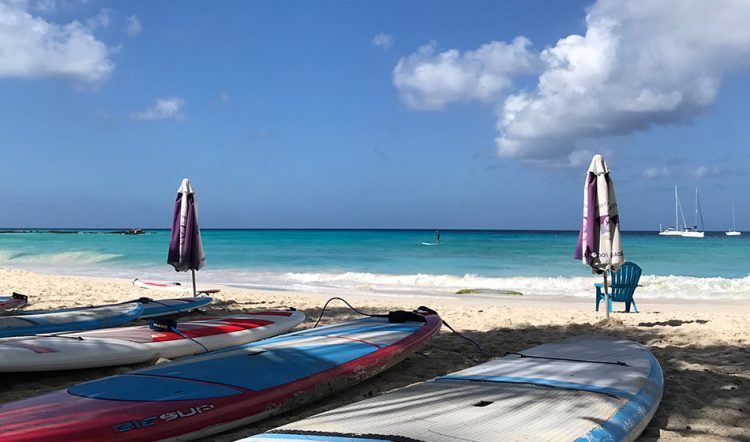 » Naniki Lush Life
In 2019, Barbados celebrated the ‘year of wellness and soft adventure’ and this nature resort is ideal for those on an active holiday as it offers yoga with stunning views of the rolling hills, forest walks and more. nanikibarbados.com

» Seaduced catamaran evening cruise
For an extra-special experience to celebrate your running achievements, board a luxury private charter for an evening catamaran cruise. seaducedbarbados.com

» St Nicholas Abbey
Learn about the history of Barbados at this experience offering tours, rum tastings and a heritage railway. stnicholasabbey.com

» South Coast Boardwalk
While the Barbados roads are very busy, there are a number of beautiful paths perfect for running, including the 1km long boardwalk found just along the coast from Bridgetown, near the Coconut Court Beach Hotel. 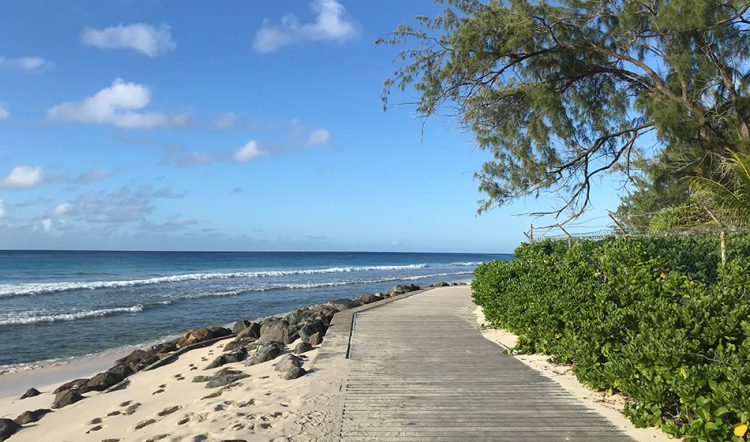 » My visit included a stay at the friendly and comfortable family-owned Coconut Court Beach Hotel, which offers well-equipped rooms with kitchenettes, all with beautiful views out to the ocean. Located adjacent to the South Coast Boardwalk, it’s just a 20-minute walk from the race start area. coconut-court.com

» Head to Oistins for a Fish Fry dinner or La Cabane for beach-side dining.

» Barbados is in the Atlantic time zone and is GMT minus four hours. Remember your sun cream and bug spray!