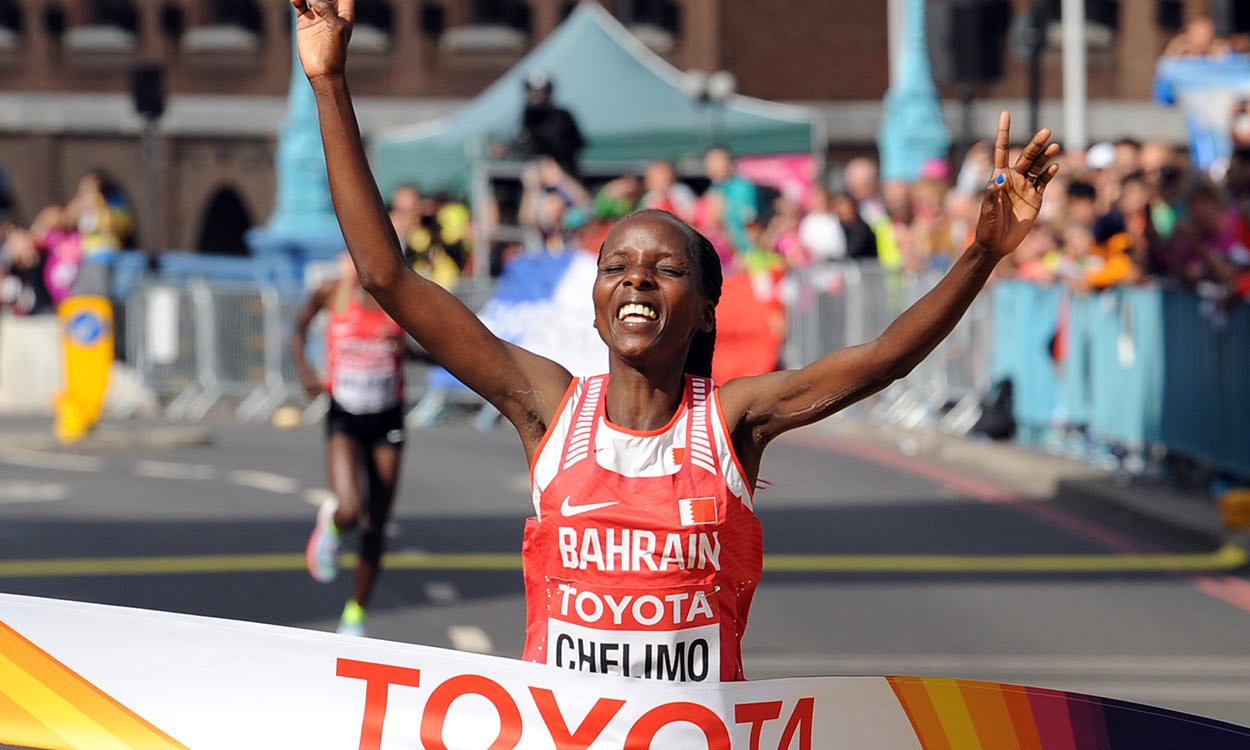 Rose Chelimo ultimately won the women’s marathon at the IAAF World Championships from two-time champion Edna Kiplagat and American Amy Cragg but it was the athlete finishing 18th who found herself as the centre of attention for the majority of the 26.2-mile contest.

The 38-year-old Briton Alyson Dixon found herself in the lead going through 10km and promptly spent much of the next hour and a half way out in front on her own and revelling in the strength of the home support which steadily grew with every passing step of the race.

She was eventually caught by the chasing pack, as she fully expected to be, but admitted the experience was a career highlight.

Once Dixon was reeled in, it was the Kenyan-born Bahrainian Chelimo who decided to take charge, coming home in 2:27:11, seven seconds ahead of Kenyan Kiplagat and Cragg, who sprinted away from Flomena Daniel to take bronze. Defending champion Mare Dibaba of Ethiopia could only manage eighth in 2:28:49.

Dixon was not the first British athlete to cross the finish line, that honour going to the 13th-placed Charlotte Purdue after she ran 2:29:48 to finish as the top European. Tracy Barlow completed the British contingent with a 2:41:03 clocking for 43rd place.

“I’m lost for words, it was amazing,” said Dixon, who was 14th at the London Marathon back in April. “I knew I was in fantastic shape, training has gone so well, it was a quick turn-around from the London Marathon, but the last seven weeks I’ve spent at altitude and sessions have gone beyond belief, I’ve done mileage like I’ve never done – 130–140 miles a week. It all paid off out there. I never in my wildest dreams expected to be leading.

“I kept on checking my splits, there was nothing crazy so I was just like ‘Go for it’. I knew they were going to come past us and I just tried to hold on.

“If you can’t enjoy running a World Championship in London with that support what are you in the sport for? It was giving you that boost every time. Even in that last lap coming round, I was hanging on for dear life and I was still like ‘Come on, cheer, just take my mind off this’.

“I’ve done all this hard work, you’ve got to enjoy it. If I could do it again tomorrow I wouldn’t change a thing. I ran at Rio last year and thought you’d never get better than an Olympic Games, but this just totally blew it out the water.”

Chelimo, too, was delighted and admitted her surprise at overcoming Kiplagat, who was aiming to be the first athlete to win three world marathon titles.

“Edna Kiplagat is strong,” she said. “At 35km I pushed, after some time Edna came and I said to myself ‘let her go’, I already accepted to be second. But then I caught her, I was encouraged and thought ‘maybe I can try’.

“My life will change because I am a world champion for my country now. It is so special for Bahrain.”

Purdue found the four-lap course challenging with its twists and turns but was pleased with her well-judged race.

“At the beginning I held back quite a lot and I think it definitely paid off well because at the end I felt so good,” she said. “I was picking them off. I had nothing else to give but I felt really strong on that last lap so I was really happy.”