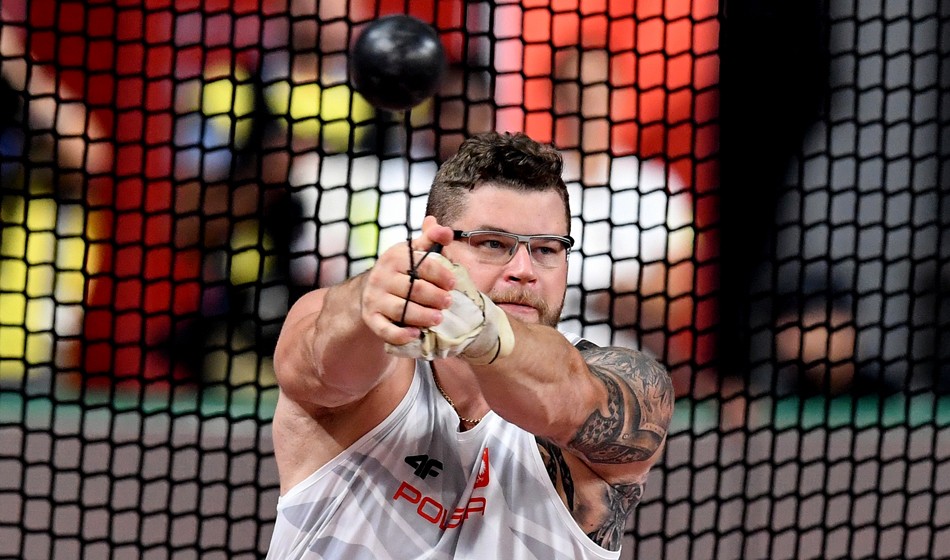 Paweł Fajdek may have drawn a blank from his two Olympic appearances but he is now the greatest world championships competitor in hammer history as he won an unprecedented fourth gold with a dominating performance in Doha on Wednesday.

The Polish thrower led from the off with a mark of 79.34m and then improved to 80.16m in the second round. The third was a mere 79.37m, but he stretched the lead further with an 80.50m fourth round throw. These would prove to be the best four throws of the day as he finished anti-climatically with two no throws.

France’s Quentin Bigot was fourth in London but otherwise has a mediocre championships record, failing to even make the European final in Berlin last year.

He served a doping ban between 2014 and 2016 which kept him from competing in Rio, although he puts that down to youthful stupidity and insists he’s a changed – and cleaner – athlete now.

He started with a promising 76.34m, then improved to 78.06m to go third before further improving to 78.19m in the fourth round to go second and that ultimately proved sufficient for the silver medal.

European bronze medallist Bence Halász started well with a 78.18m throw to go second initially but then really struggled to have another decent throw but it was enough to win bronze.

It was close though as three other competitors finished within 80 centimetres of him.

A few hours later it became even closer as organisers announced that following an appeal by the Polish team challenging the validity of Halász’s first throw, the jury of appeal “concluded that irregularities in the conduct of the competition” disadvantaged Wojciech Nowicki and it was decided that the world leader and European champion should also be awarded a bronze medal.

News emerging from Doha at 2:24am: Wojciech Nowicki will be awarded a bronze medal in the hammer.

Here is the decision. pic.twitter.com/bpXfmuYgbi

Ukraine’s Mykhaylo Kokhan, only 18 and surely a potential future world champion, threw a PB of 77.39m for fifth and a world age record while Elvind Henriksen was sixth with 77.38m.

Britain’s Commonwealth champion Nick Miller started with a solid 75.31m but his next two efforts were no throws, the last one finishing outside the arc when it looked as if might be an improvement when he released it.

Miller’s second throw was subject to an appeal but the jury upheld the decision to call it a foul.

Eighth at the beginning of the third round, he ended up a disappointing 10th.

Sophie McKinna made a sensational improvement in the women’s shot qualifying to become the first Briton to make the final since the inaugural championships in 1983 when Venissa Head and Judy Oakes occupied 10th and 12th place.

She started with a throw of 17.74m before improving to 18.04m which incidentally would have just got her into the final anyway on countback and 12th best thrower as European champion Pauline Guba also threw 18.04m.

However, in the third round she ensured her place by going well over the 18.40m qualifying mark with a sensational 18.61m.

It was the longest throw ever achieved by any Briton in the world championships and gave her sixth place overall in qualifying and strengthened her hold on fifth place in the UK all-time lists behind Oakes, Head, Myrtle Augee and Meg Ritchie.

.@sophiemac10 speaks with @euancrumley after her PB of 18.61m for the longest throw by a British shot putter in 21 years to make the world championships final – the first Brit to do so since 1983 #WorldAthleticsChamps pic.twitter.com/7vV2CCO95F

Jamaica’s Danniel Thomas-Dodd went furthest overall with a 19.32m while USA’s Maggie Ewen with 19.21m was the only other thrower over 19 metres.

“It wasn’t expected for me to get into the final so I didn’t have any pressure,” said McKinna. “I went there to throw my best and I was lucky enough to produce it when it really counts at the world championships. Now the pressure’s off I can go and enjoy myself in the final.”

Swedish record-holder Fanny Roos, who has thrown 19.06m this summer, only achieved 18.01m and narrowly failed to qualify.

The women’s discus qualifying was less noteworthy with the expected top three easily the best as they mirrored their 2019 world ranking positions.

Seven achieved the automatic qualifying distance of 63.00m and the final spot in the final was achieved by a 62.25m.