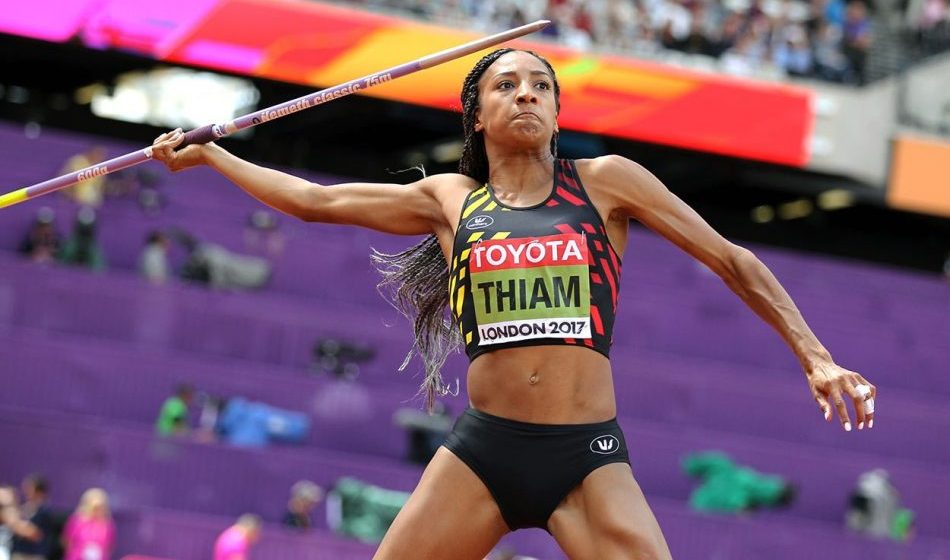 Nafissatou Thiam is poised to add the world heptathlon title to her Olympic gold. The Belgian has a lead of 172 points over Carolin Schafer of Germany going into the final event, the 800 metres, while Britain’s Katarina Johnson-Thompson lies in fifth place.

Sunday’s action in London began with Johnson-Thompson jumping 6.56m in the long jump. It followed her 200m heat win the previous evening and put the Brit up into third place overall as Thiam consolidated her lead with a 6.57m jump.

Then, in the penultimate event – the javelin – Thiam threw 53.93m as Johnson-Thompson threw 41.72m, a season’s best and close to her PB.

But the Brit has her work to cut out if she’s going to pass third-placed Anouk Vetter of the Netherlands and fourth-placed Yorgelis Rodriguez of Cuba in order to win a medal.

Andrew Pozzi got his 110m hurdles campaign off to a good start when he was first in his heat in 13.28. “The atmosphere was unbelievable,” he said. “You’ll hear all the athletes harp on about it, but you just don’t expect it until you get in there, it really is fantastic.”

But his GB team-mate David Omoregie missed out on qualifying by one hundredth of a second after running 13.59 for sixth in his heat and David King was also knocked out after hitting hurdles and running 13.67 for eighth in his heat.

Olympic champion Shaunae Miller-Uibo was among those who eased through qualifying in the women’s 400m. Of the Brits, Zoey Clark qualified with 51.88 for third in her heat, but Emily Diamond went out with 52.20 for fifth in her race and Anyika Onuora also didn’t progress after running 52.58 for eighth in her heat.

Yasmani Copello of Turkey led the men’s 400m hurdles qualifiers with 49.13 as Britain’s Jack Green also qualified with 49.55 for fifth in his heat. Kyron McMaster of the British Virgin Islands, one of the favourites for the event, was disqualified for a lane infringement.

“I don’t deserve the well done for getting through,” said Green. “I should be winning that heat, not going through as a fastest loser in 49.5. It’s great to get through but it shouldn’t be done in that way.”

There were no such surprises in the men’s pole vault as all the main contenders like Sam Kendricks, Renaud Lavillenie and Shawn Barber progressed.