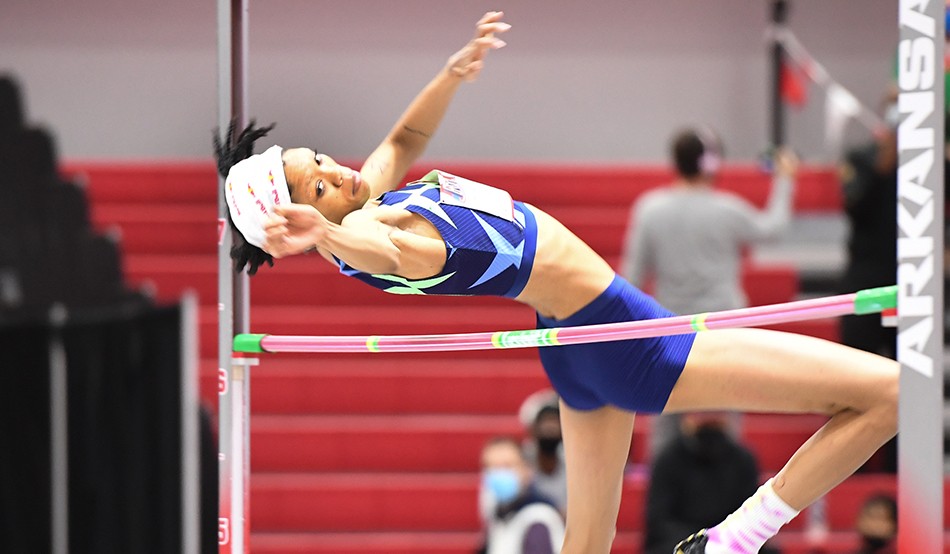 The jumps were in the spotlight during the third meeting in the American Track League series on Sunday (February 7), with Sandi Morris and Marquis Dendy setting respective pole vault and long jump world leads and Vashti Cunningham setting an indoor high jump PB.

Morris had recorded a world lead of 4.81m the previous weekend but that had been improved by Holly Bradshaw with 4.85m and then Anzhelika Sidorova with 4.87m during the following week.

But, clearing 4.88m on her third attempt, world indoor champion Morris went back up to the top of the rankings and even had three tries at what would have been a world record height of 5.07m.

In the men’s long jump, 2016 world indoor champion Dendy opened with 7.89m but then had four fouls, before leaping his world-leading 8.21m in the final round.

Another world indoor gold medallist in action was Cunningham and the 2016 high jump champion cleared an indoor PB of 2.00m to win and match her best mark achieved outdoors.

A video clip of 2005 400m hurdles world champion Bershawn Jackson’s eight-year-old son blasting his 4x200m relay leg recently went viral but this time it was Jackson’s 15-year-old daughter Shawnti impressing as she clocked a 7.24 60m PB for seventh in the women’s 60m final in Fayetteville.

The men’s mile also had a mixture of great experience and young stars, with Takieddine Hedeilli winning in a 3:56.79 PB as Nick Willis achieved 19 consecutive years of sub-four-minute miles with 3:56.82 in second and Hobbs Kessler – who wasn’t even born when Willis achieved his first sub-four – clocking 3:57.66 in third for a US high school record.

Over at the PSD Bank Indoor Meeting in Dortmund on the same day, Khaddi Sagnia soared out to a long jump world lead of 6.82m in the second round of the competition, while Joris van Gool won the men’s 60m in a Dutch record of 6.58.

Click here for other recent results, while subscribers to AW magazine can access the AW Clubhouse as part of their membership for further reports and results – click here