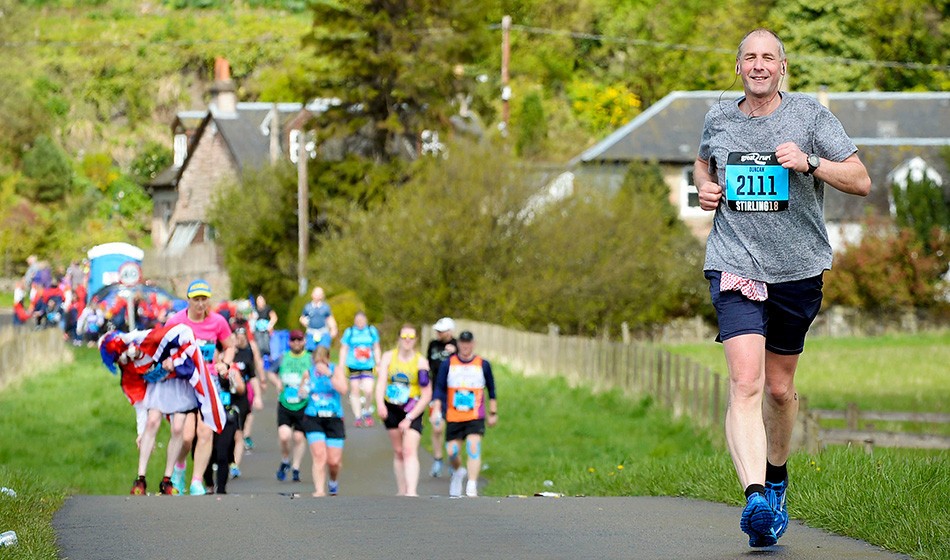 If you missed out on a ballot place for the 26.2-miler in the UK capital, here are some other marathons worth considering

Runners from around the world will find out this week whether their ballot entry to next year’s Virgin Money London Marathon has been successful.

But with a world record total of 414,168 applicants from the UK and overseas registered, hundreds of thousands of hopefuls will now be re-evaluating their spring running plans.

If you’re among those to have missed out, then don’t panic! Here we highlight a few other options, both in the UK and overseas.

When? April 28
Where? Stirling, Scotland

The Simplyhealth Great Stirling Run offers both a marathon and half-marathon, combining a picturesque course with the convenience of a city centre start and finish.

The challenging closed-road route takes in the local countryside, imposing castles and historic towns. Starting near Stirling Castle, the course takes runners past Blair Drummond Safari Park, over the historic Bridge of Teith, through Doune and on to Dunblane.

Part of the remodelled course which was introduced at this year’s event takes in a long, scenic section along Hillfoots Road through Blairlogie, close to Tullibody, before returning to Stirling via the Springkerse area.

When? March 24
Where? Limassol, Cyprus

If you’re considering combining your marathon running with a break overseas then the OPAP Limassol Marathon GSO could be an ideal option.

There’s a range of races on offer – with the marathon part of a programme which also features a half-marathon, 10km and 5km – and all of them take advantage of Limassol’s flat course which takes in the city’s spectacular coastline, with magnificent views across the Mediterranean.

Limassol is situated on the southern coast of Cyprus and is the island’s largest seaside resort. The marathon starts and finishes in the Molos area.

When? April 14
Where? Brighton, England

This seaside event in one of the country’s most vibrant cities continues to grow in popularity. Renowned for its buzzing atmosphere and crowd support, the course winds through the city streets, finishing up on the spectacular Brighton seafront.

General entries are set to reopen on October 22 and runners will need to register interest at www.brightonmarathon.co.uk/reopening to access a unique entry link.

When? May 5
Where? Newport, Wales

The ABP Newport Wales Marathon & 10K will return in 2019 after its inaugural event earlier this year.

The event, which boasts ‘a fast, scenic route’, starts and finishes on Newport’s riverfront and the course takes in iconic landmarks, coastal wildlife and picturesque medieval villages.

Organisers state that over 70% of participants claimed a PB at this event in 2018.

When? May 5
Where? Southampton, England

The ABP Southampton Marathon programme also offers a half-marathon and 10km taking place on closed roads through the heart of Southampton.

All races start and finish in the city centre, with the course passing iconic local landmarks including Bargate, QE2 Anchor and St Mary’s Stadium as well as the ascent – and more popularly, the descent – over the Itchen bridge, which will be closed exclusively for the event.

When? April 28
Where? Blackpool, England

The Blackpool Festival of Running offers the full 26.2-mile event as well as a half-marathon, 10km, 5km and 2km.

The marathon takes place on a flat two-lap course, designed for PB chasers. The course takes in Blackpool’s promenade, passing a number of landmarks and tourist spots.

When? May 5
Where? Belfast, Northern Ireland

The 2019 Deep RiverRock Belfast City Marathon will take place on a new ‘flatter, faster marathon route’ which encompasses North, East, South and West of the city.

The main marathon event historically took place on May Day Monday each year but in 2019 it will be held on a Sunday.

Starting in the grounds of the iconic Stormont Estate, the event finishes at Ormeau Park, while there is also an eight-mile walk and fun run on offer.

When? April 14
Where? Paris, France

If you’re still after a big city marathon to run next spring, then you could consider swapping the streets of London for the roads of Paris.

This event in the French capital takes runners past the Champs-Elysées, the Bois de Vincennes and Boulogne, offering an impressive backdrop with spectacular scenes and landmarks along the way.