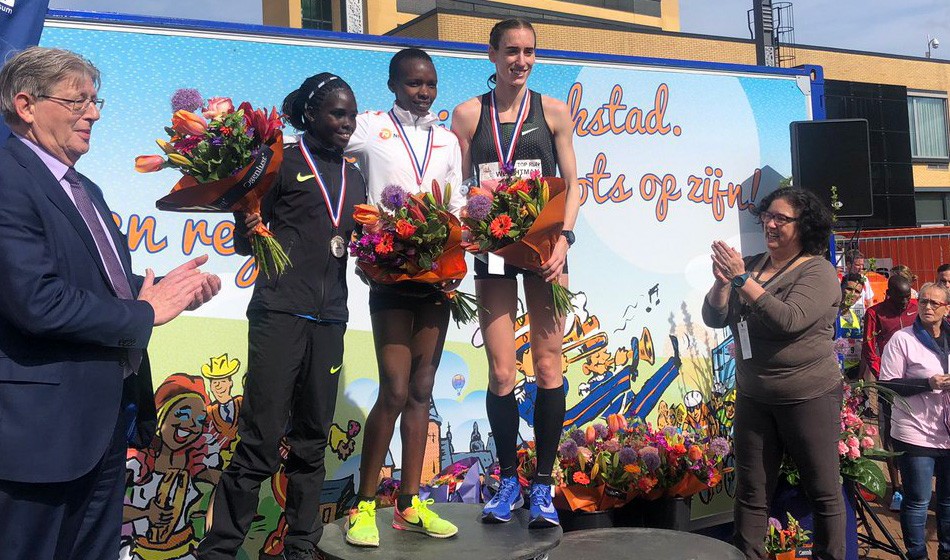 Coverage of the English area 12 and 6-stage road relay championships can be found here, while a report on the first day of World Masters Indoor Championships action is here.

Check out other recent highlights from the world of the sport below.

Just two weeks after running a 10km PB of 31:59 in Trafford, Laura Weightman went even quicker with a time of 31:40 to finish third at the Parelloop 10k.

That time moves the 2018 European 1500m and Commonwealth 5000m medallist from 12th to fifth on the UK all-time list, with only Paula Radcliffe, Liz McColgan, Gemma Steel and Wendy Sly to have ever gone quicker.

The race was won by Evaline Chirchir in 31:17 from her fellow Kenyan Carolyne Jepkosgei, while men’s race winner was Uganda’s Mande Bushendich in 27:56 from Morocco’s Yakoub Labquira.

Cameron Corbishley made an impressive 50km race walk debut, clocking 3:53:20 to become the second-quickest ever British athlete in the event behind Chris Maddocks with 3:51:37.

Only five British athletes have ever dipped inside four hours for the event but in Dudince two GB walkers achieved it as Dom King clocked 3:56:35, with both athletes well inside the qualification time for the IAAF World Championships in Doha. They secured their spots for the event in Qatar, with the race being the official GB trial event.

Cambuslang Harriers and Central AC secured success, with Cambuslang claiming the men’s title from Inverclyde AC and Central the women’s ahead of Shettleston.

England’s Holly Weedall won the junior girls’ race from Kiya Dee and Katie Johnson, while there was an England clean sweep in the junior boys’ event as Lewis Sullivan won from Christopher Perkins and Joshua Blevins.

The men’s marathon was dominated by Kenya’s Abel Kibet Rop, who won by 20 minutes in 2:17:40. His fellow Kenyan Ruth Chemisto Matebo secured the women’s title in 2:43:30.

Hilary Kiptum Maiyo Kimaiyo from Kenya won the half-marathon in 67:19 and the female title went to Christine Moraa Oigo, also from Kenya, with a time of 75:37.

The Petrolina 10K Energy Race was the third race of the morning, with the top spots on the podium claimed by Cypriot athletes Avraamis Avraam (34:51) and Olga Andrejeva (37:39).

AW‘s Paul Freary and Olympic silver medallist Wendy Sly were among the age group winners as they clocked 78:49 and 1:46:50 to respectively win the M50 and F60 categories.

Seyfu Jamaal ran 68:14 to win the men’s race, while women’s title winner was Catriona Paterson in 83:07.