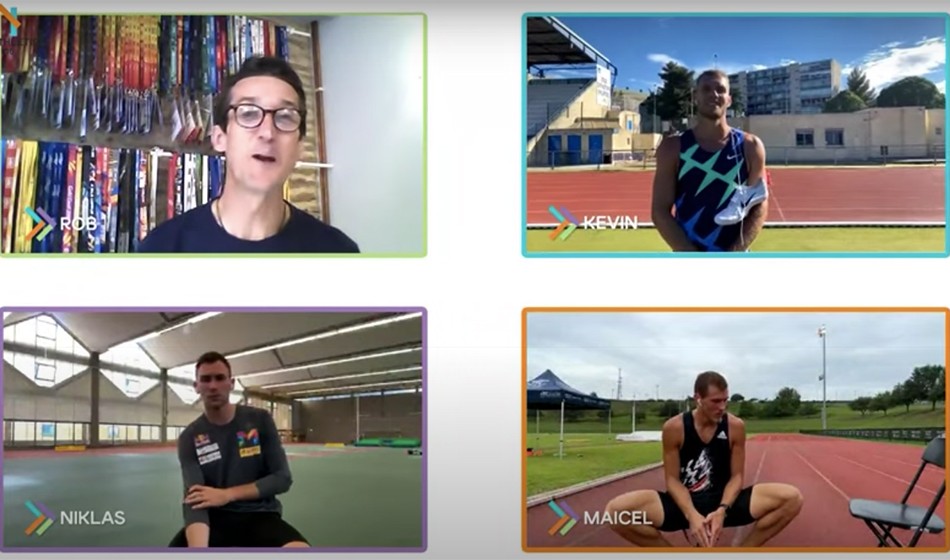 Kevin Mayer was crowned champion as combined events action returned to the screens of athletics fans around the world, winning a remote pole vault, shot put and shuttle run ‘triathlon’ ahead of Niklas Kaul and Maicel Uibo on Sunday.

While traditional athletics remains on hold, World Athletics’ Ultimate Garden Clash series has seen athletes involved in virtual competition and this time it was the turn of the world’s top three ranked decathletes.

World record-holder Mayer was competing in a sunny stadium in Montpellier in France, while world champion Kaul was at an indoor facility in Mainz in Germany and world silver medallist Uibo was in a wet and humid Clermont in Florida, USA.

First up was the pole vault, which saw the trio attempt to clear a 4.00m bar as many times as possible during 10 minutes.

Despite missing the start and joining the contest around 25 seconds late, Mayer – who has a PB of 5.60m set indoors – soon caught up and was the first athlete to achieve three clearances.

He also knocked the bar off during his 16th attempt and had to spend time putting it back up himself, but achieved a total of 17 clearances ahead of Uibo’s 15 and Kaul’s 14.

Next was the shot put, where the challenge was to throw the 7.26kg implement beyond a 12-metre line as often as possible, again during a 10-minute period.

Each athlete had to collect their own shot put after each attempt and the strong performances by Mayer, who has a PB of 17.08m, together with his system of throwing and rolling the implement back while he jogged to the circle after collection, proved effective as he managed 28 successful throws, compared to Kaul’s 22 and Uibo’s 20.

The scores after two events were 45 points to Mayer, 36 for Kaul and 35 for Uibo.

The final event was the shuttle run, with athletes needing to complete a full out and back circuit around two cones placed 20 metres apart to score each point.

It was close but Kaul came out on top in that event, completing 27 shuttles, while Mayer and Uibo each achieved 26.

That saw Mayer secure overall success with 71 points ahead of Kaul with 63 and Uibo with 61.

“I didn’t really know what to expect because it’s something we’ve not really done,” said Mayer. “It was something new, I just wanted to try.

“It was a bit stressful because I knew I had big competitors against me. It was fun, even if I prefer to compete with guys in the same stadium as me.”

Kaul said: “It was fun but I didn’t expect it to be that hard.

“The pole vault was very exhausting but in the end it was fun to compete against these guys again.”

Uibo was also glad for the return to competition and said: “Obviously none of us have really done something like this before but it was a great thing to come out and have fun on this Sunday with each one of us in different locations.

“At least we got a little competition moment going on.”

In April World Athletics suspended the qualification period for the postponed Olympic Games in Tokyo until December 1 and when asked about his return to decathlon competition, Mayer said: “As soon as the qualification is good for the Olympics, I will compete.

“I think I will organise a decathlon, and guys (speaking to Uibo and Kaul) you are welcome to come, in December.

“I don’t know where it will be but I am seeking to organise something great for the qualification with good conditions so I think in December you will see me in the decathlon.”

After his 'Ultimate Garden Clash' triathlon win, WR-holder Kevin Mayer was asked about his decathlon return. "I think I will organise a decathlon in December. I am seeking to organise something great for (Olympic) qualification with good conditions." ➡️ https://t.co/aH3DYSkR8m pic.twitter.com/wG97oJnjoN

Mayer also reinforced how he would like to see the triathlon format appear in other meetings, including as part of the Diamond League series.

“I have asked the Diamond League to put the triathlon in for the past three years,” he said. “I succeeded in Paris but I have no voice in the other countries so I have to make myself better and maybe they will listen to me. I know the other decathletes want it too.”