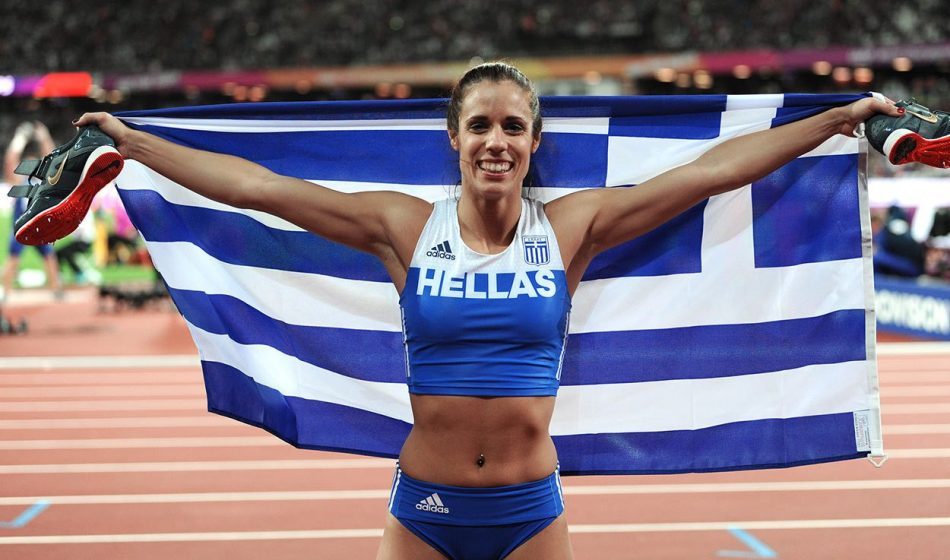 After winning the Olympic pole vault title last summer, Katerina Stefanidi doubled her global gold medal haul in London as she impressed with a world-leading Greek record at the IAAF World Championships.

Clearing 4.91m on her first attempt, the 27-year-old achieved the second best-ever winning mark at a world championships after Yelena Isinbayeva’s then world record 5.01m from Helsinki in 2005.

In a repeat of the Rio top two, USA’s Sandi Morris secured silver with 4.75m, while Venezuela’s Robeilys Peinado enjoyed the competition of her life to win bronze along with Cuba’s defending champion Yarisley Silva.

The bronze medal-winning height of 4.65m was achieved by a total of five athletes, including Britain’s Holly Bradshaw, with the podium places decided on count-back.

“I knew Sandi would be the main athlete I’d have to compete against here and it would probably be down to the two of us,” said Stefanidi. “We have a really good relationship and the healthy rivalry we have will hopefully push us even higher and is good for the event.”

Morris added: “I knew Kat was on her A-game. This whole year I’ve been struggling a bit and I didn’t quite put it together here tonight.”

Stefanidi was the last to enter the competition at 4.65m and she cleared that on her first attempt. Her first failure came at 4.89m before she passed to her winning height which she cleared first time before three unsuccessful tries at what would have been a championship record of 5.02m.

Bradshaw had seemed in shape to make a real impact having improved the British outdoor record twice this summer, her best of 4.81m coming at a competition in Germany last month. But the 25-year-old struggled with the conditions in the London Stadium and was left visibly upset knowing she had so much more to give.

“I feel heartbroken to be honest,” she said. “I’m in the best shape of my life and I didn’t take advantage of that out there.”

Ahead of the competition, Bradshaw had explained her method for keeping focused, with a star bracelet providing a reminder of her five cues in competition. She wore the bracelet on Sunday evening but found it tough going with the changeable wind.

“It was quite tricky conditions out there but I’ve had that all year so it’s not an excuse,” she said. “It was a head wind and then it would be no wind – it’s just difficult for a pole vaulter when the wind is like that.

“Some of the girls out there did a good job but to get a bronze medal with 4.65m is not the best standard, so I am a bit gutted that I didn’t take advantage of the low height.”

Her finishing position matched what Rio fifth-placer Bradshaw achieved in the same stadium five years ago when, competing under her maiden name of Bleasdale, she cleared 4.45m on her Olympic debut.