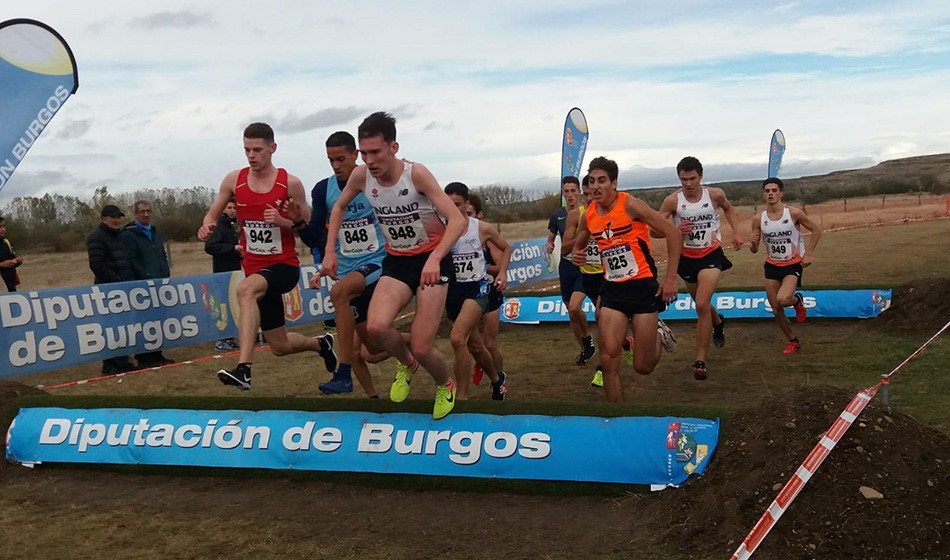 A separate report on the British Athletics Cross Challenge in Milton Keynes can be found here, while other recent highlights are below.

Wales’ Jake Heyward was among the winners at the opening IAAF Cross Country Permit race of the season as he romped to a comfortable victory over the 6000m course in the under-20 men’s race, Alex Donald reports.

Inter-Counties champion Rory Leonard led the English team home in second place, while Spain’s Ouassin Oumaiz was the third athlete home and a great scalp for the British duo.

“I’m happy with my run in Burgos,” said Heyward. “The atmosphere was great and this sets me up for the Euro trials in two weeks’ time.”

In the women’s under-20 race, Zoe Wassell finished third, leading her England team home in a race won by Portugal’s Mariana Machado.

Uganda’s Jacob Kiplimo was a convincing winner in the senior men’s race as he made light work of the difficult conditions to come home ahead of Eritrea’s Aron Kifle and Edward Zakayo of Kenya.

The senior women’s race was won by defending champion Senbere Teferi of Ethiopia ahead of Kenyan duo Margaret Chelimo Kipkemboi and Norah Tanui.

Cardiff’s Charlotte Arter was the first of the British athletes to finish amongst a world class field in ninth place. This will offer a confidence boost for the European 10,000m Cup bronze medallist who started her season in Spain following injury through the late part of the summer.

Nicole Taylor followed Arter home in 15th place running for England. Jenny Nesbitt was the next Welsh woman home in 20th place with England’s Lydia Turner and Elsey Davis also both finishing in the top 30.

Both are coached by recent winner of the Scottish performance coach of the year award – Andy Young – who guides Laura Muir.

Reekie clocked 13:07 to win the senior women’s title by two seconds from Morag Millar (MacLarty). Bronze medallist Steph Pennycook was a further 10 seconds back but led Edinburgh Uni to the team win, backed up by under-20 gold medallist Anna Macfadyen.

GB international Kane Elliott, the European under-18 champion at 1500m on the track last summer, took the under-17 men’s race, while Cera Gemmell won the under-17 women’s title.

Under-15 wins were claimed by Christopher Perkins, who has only just turned 13, and Valencia Wright.

Scotland’s Jamie Crowe won the South Central cross country race to book his place at the NCAA Championships. His Lamar University team-mate Jordan Rowe was seventh and will join him.

Britain’s Jack Rowe and Chris Olley were fifth and ninth respectively at the West Region Championships, with Rowe also securing a spot for the national meet.

In the North East, Hugo Milner finished fifth to also qualify for the event at the University of Wisconsin-Madison. Jamie and Liam Dee were part of the Iona team to qualify.

Georgia Fear was 14th and qualifies with her Dartmouth team.

Euan Makepeace was 13th in the Great Lakes Region event to make the NCAA Championships, while in the Mountain Region, Ryan Forsyth was 10th and will join the Colorado team in Wisconsin.

Kenya’s Ruth Chepngetich ran 2:18:35 to retain her title and move to equal seventh on the world marathon all-time list, also breaking both the course record and Turkish all-comers’ record.

She won by six and a half minutes from her compatriot Margaret Agai with 2:25:04.

AW cover star Phil Sesemann, who anchored Leeds City to National cross country relay gold the week before, ran 30:00 to claim victory, while the women’s race was won by Laura Gent in 35:17.

Aldershot, Farnham and District’s Emily Hosker Thornhill and Louise Small claimed top two spots in the women’s race ahead of the European trials in two weeks.

» Further coverage and results in the November 15 edition of AW