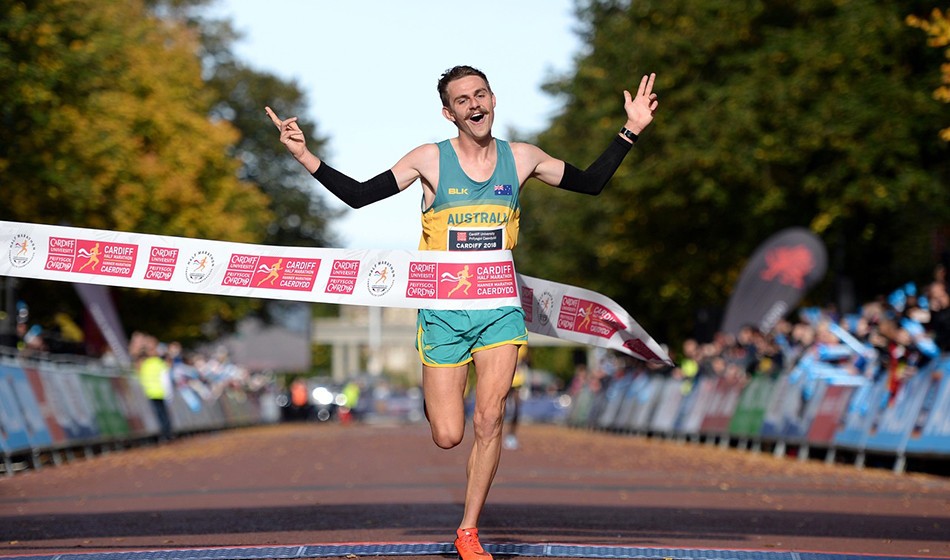 Australia’s Jack Rayner and Uganda’s Juliet Chekwel won the inaugural Commonwealth Half Marathon Championship titles in Cardiff in a race that saw almost 20,000 runners on the streets of the Welsh capital on Sunday.

Rayner was a surprise winner to some as he sped to victory in the men’s race in 61:01, but the 22-year-old first showed his talent on the world stage last year when he out-kicked Olympic 1500m champion Matt Centrowitz to win the 5000m B race at the Payton Jordan meet in the United States.

On Sunday he showed his fast finish to out-pace Uganda’s Fred Musobo to take the win at an event that was commemorating the 60th anniversary of the British Empire and Commonwealth Games, which was held in Cardiff in 1958 and where Australia won every men’s running title from 880 yards to the marathon.

“I knew it would be tough after looking at the start list because a lot of them had run 62, 61 and even 60 minutes,” said the moustachioed Rayner, who was described on the BBC Wales’ coverage as looking like a “1920s matinee idol” but who other parts of the media have likened to a young Steve Prefontaine.

“I knew I was in at the deep end and I’d have to do something special to win. I felt I could run a lot faster than my PB and I did that. It is just amazing and it makes the win even better than this is the first time they’ve held the Commonwealth Championships.”

He added: “I’ve been unbeaten on the roads in Australia this year and, as this was my only race overseas this year, I wanted to keep that streak going. I went through 10K in around 28:40 and stayed on the leading pack as long as I could.”

Apart from producing the two individual winners, the event was a great success for Australian and Ugandan runners in general. With DeJen Gebreselassie in eighth, Nicolas Harman 12th and Ed Goddard 15th, Australia finished second to Uganda in the men’s team event.

In the women’s race, Chekwel took the title in 69:45 with Australia’s Celia Sullohern runner-up in a big PB of 71:04. As both nations were well supported by their team-mates, Uganda won the team event and Australia second.

Chekwel, 28, won by 79 seconds and said: “I counted the Africans in the hotel the night before and I didn’t know if I could win. I said to myself that if I did I would be the lucky one and the best.”

“It was a great surprise. I broke off after 1km and there were a couple of men running around me who helped me. I ran 71 minutes last month and now I have run 69 and it is my first time to win a big race like this, it is the biggest title of my life.”

Leading the way for the home nations, England’s Tracy Barlow finished fifth with a PB of 72:17 as her team took bronze. Steph Twell, who had postponed her honeymoon to run for Scotland, was seventh in 72:32.

Following the event, organisers Run 4 Wales confirmed the sad news that two runners from the mass race had died after suffering cardiac arrests at the finish line.

The medical emergency team attended to both runners at the finish line before they were taken to University Hospital Wales in Cardiff, where they later died.

“This is a terrible tragedy for the families. Our deepest sympathies go out to their family and friends,” said Run 4 Wales chief executive Matt Newman.

“The emergency services reacted to this terrible situation with great speed and professionalism. Everyone connected with the race is devastated.”

» See the October 11 issue of AW for full race reports