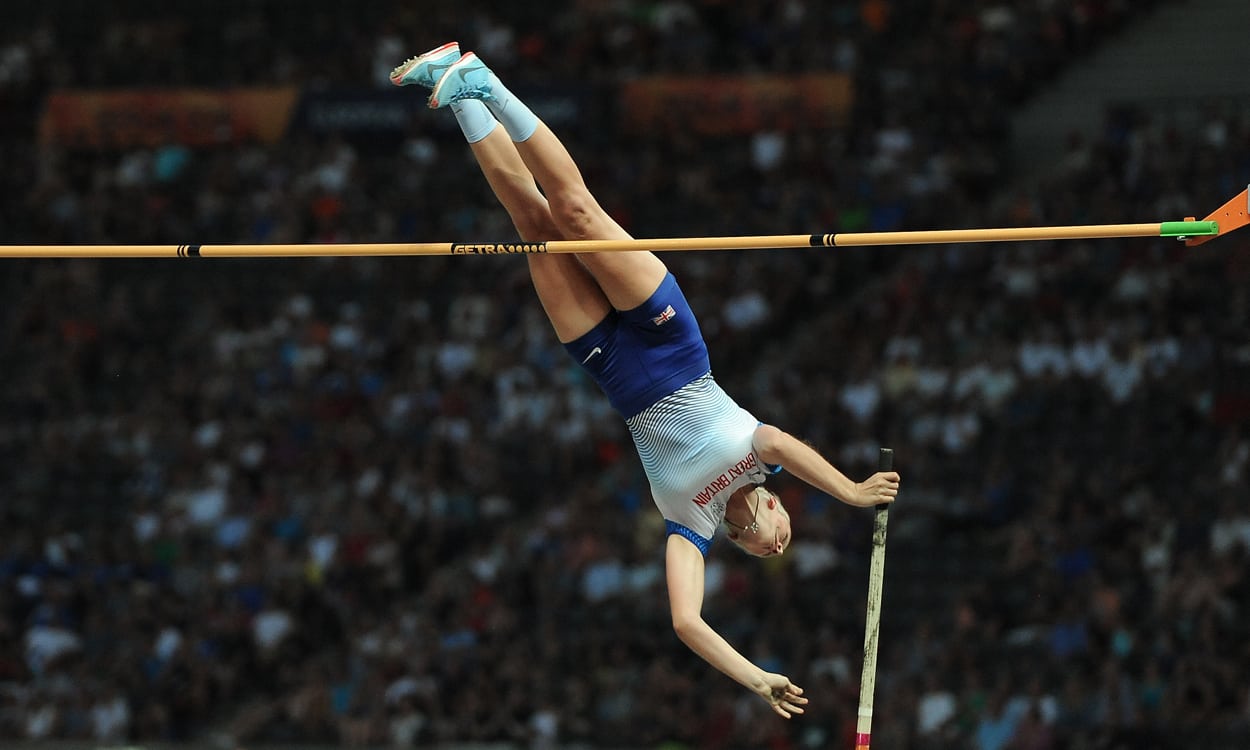 On Thursday night a storm hit Berlin and there was an electric performance from Holly Bradshaw who took bronze in the pole vault, while Katarina Johnson-Thompson has a clear lead in the heptathlon after four events at the European Championships.

While Germany were scoring a one-two in the men’s javelin, Greece did likewise in the pole vault but Britain won another medal thanks to Bradshaw.

There was no surprise that Olympic, world and European champion Katerina Stefanidi won gold.

She entered the competition after everyone else at 4.65m and cleared first time as she did at 4.75m which put her ahead.

A first-time clearance at 4.80m strengthened her hold on gold and a last chance success at a championship record height of 4.85m underlined her victory.

She said: “I have never had to defend a title before so it was stressful and I’m happy to be here and defend the title.”

Her compatriot, the 2015 world bronze medallist Nikoleta Kiriakopoulou, was her closest opponent.

She actually took the lead when she jumped 4.70m as her fellow Greek passed. Though she lost the lead, clearing 4.75m first time put her in second which was confirmed when she went over a season’s best 4.80m at the second attempt.

Bradshaw had her greatest outdoor championship result to take bronze.

She had first-time clearances at 4.55m and 4.65m but when she passed 4.70m and Russia’s authorised neutral athlete Anzhelika Sidorova cleared it, she was down to fourth and needed higher.

The Russian, who cleared 4.90m indoors this year, passed at 4.75m which meant Bradshaw had a chance to go third at that height.

After a near miss and then a less conclusive second jump, she nailed it on the third to go well clear and into third.

Neither she or the Russian could clear 4.80m and so she joined the Greeks in medal success.

BRONZE FOR BRADSHAW ?@HollyBradshawPV pulls it out of the bag to take third in the pole vault ? @BritAthletics #EC2018 pic.twitter.com/rc2cOuuuo0

While Bradshaw was the European indoor champion in 2013, and won a world indoor bronze, her previous attempts outdoors have shown tremendous consistency but a lack of medals.

After the event, she said: “I knew it would be a bit of a battle trying to get one of the medals; there were obviously two stand-out favourites in Stefanidi and Sidorova, but I knew bronze was going to be up for grabs and in the end I managed to get it.

“I felt like I jumped really well and I had loads of fun, and it’s my first outdoor medal so I’m really, really happy.

“I felt really calm,” she added. “I was just having fun, focusing on myself and focusing on clearing that bar. It’s the first time in four years that I’ve been able to put a full year of training together without an injury or surgery, so I felt really confident that I could keep building and building this year. There are some higher bars there so I’m looking forward to the rest of the season and the future.

“It felt like it was a World Championships or an Olympics – the standard of the girls and European vaulting is really strong. It means so much to me – I’ve had so many lows over the last couple of years so I live for days like this.”

Johnson-Thompson held a healthy lead after the morning session but given the relative strengths of her shot compared to world and Olympic champion Nafissatou Thiam, there was never any chance she would retain the lead after that event.

Thiam duly blasted a 15.35m outdoor PB and that gave her a 100-point lead over Johnson-Thompson, who was very close to her PB with a 13.09m throw with Thiam ahead on 3026 points.

Carolin Schafer threw 14.12m to go third with 2843 points, with Katerina Cachova losing ground on Johnson-Thompson with a 12.71m throw to be on 2830 points.

As obvious as it was in the shot, it was equally clear that positions would be reversed again after the 200m.

Thiam ran a sluggish 24.81 in the third heat, which was only 13th best overall.

In the final heat, Johnson-Thompson trailed hurdles winner Louisa Grauvogel on the bend but fought hard and looked relaxed and strong as she powered past to win in 22.88 to gain 1091 points and lead on 4017 overnight.

Despite Johnson-Thompson’s healthy lead the scoreboard still suggests her projected score puts her a likely fourth.

At the end of the evening she said: “Three more events! The atmosphere is amazing. This is a very good score. It has been a great day for me. Tomorrow I want to continue like today.”

Thiam said: “It’s been a difficult first day and I know I can do much better. I got a PB in the shot and tomorrow will all be about the long jump and javelin.”

The hosts may have been disappointed to miss out on gold but did take the other two medals – their fourth in a few minutes.

The 2017 world bronze medallist Pamela Dutkiewicz just lost out in the closing stages and was second in 12.72, while defending champion Cindy Roleder, who has been well down on her best form this year, was pleased to pick up a bronze in 12.77.

Nadine Visser was a distant fourth in 12.88 as European leader Alina Talay – 12.41 this year – failed to finish.

The semis had been German dominated with Dutkiewicz fastest with 12.71 to win the third semi and Roleder winning the first in 12.83.

The women’s 400m looks like it will be a mightily competitive final as just 0.29 of a second covered the eight qualifiers in the semi-finals.

Astonishingly it was Britain’s Laviai Nielsen, who was ranked just 14th amongst contenders, who ran the fastest time as she took half of a second off her PB in the first semi-final.

Keeping her form superbly, she picked off runners with much faster PBs and her 51.21 just pipped Maria Belibasaki’s 51.23 and Lisanne De Witt’s 51.24.

She said: “I’m know I’m still 22 but I think I’ve got a bit more experience – I know what my race should feel like. I knew coming into the home straight they would all come at me, in lane eight you have to run blind until the finish so when they all came at me I knew I had an extra gear and that’s what makes me competitive so I just had to trust my finish.”

For much of the second semi, Anyika Onuora looked like she might join her in the final as she eased the first 200m then was moving better than anyone at 300m but tied up near the end and her third place in 51.77 proved insufficient with only the first two guaranteed a spot.

Amy Allcock was never on terms with the top two and was sixth in her semi in 51.91.

» Results can be found here, while a day-by-day guide to the upcoming action in Berlin is here. See the August 9 and 16 editions of AW magazine for coverage