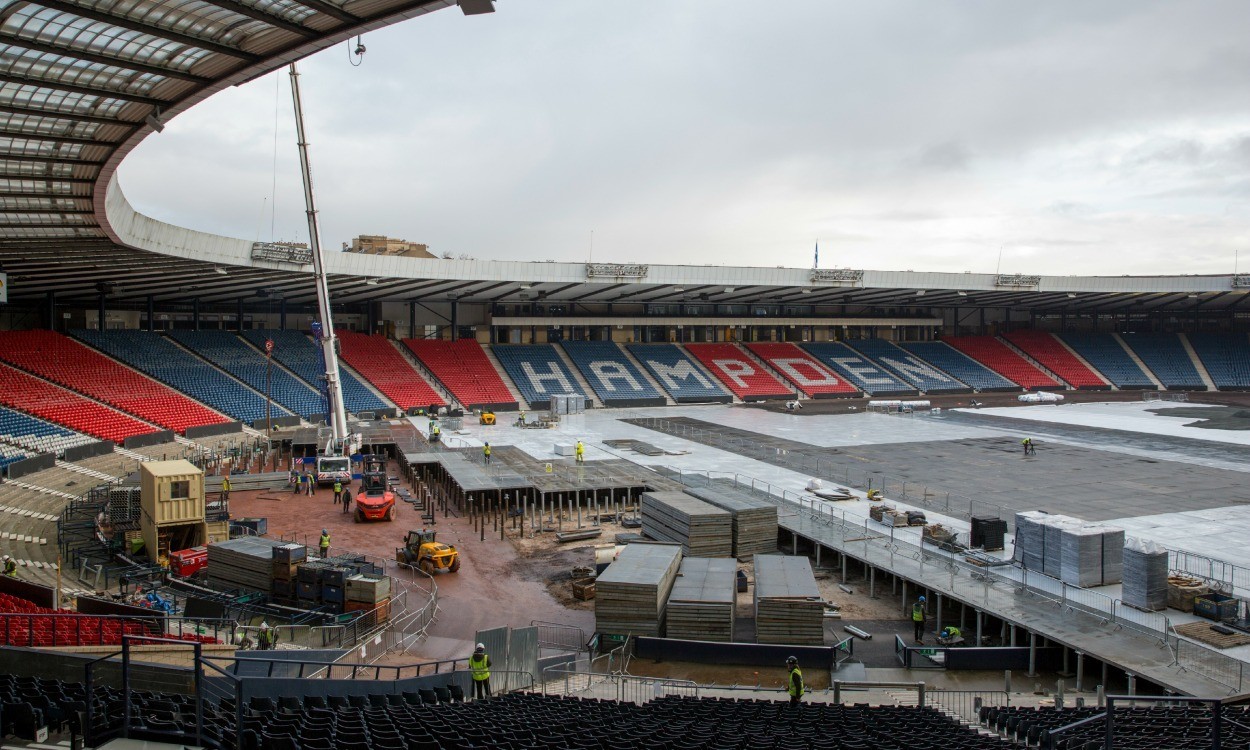 Eilidh Child has hailed the “spectacular transformation” of Hampden Park as it changes from the home of Scottish football into a world-class athletics arena for the Glasgow 2014 Commonwealth Games this summer.

In order to gain the width and length required for an IAAF-approved athletics track, the stadium surface has been raised by almost two metres. A full infield complete with freshly-covered grass now sits on a temporary deck, made up of 1200 base panels supported by over 6000 structural steel stilts. The track surface will be laid shortly.

It is the first time this technology has been used on this scale to deliver an athletics event, with Games organisers labelling it the ‘Glasgow solution’.

The temporary track and raised surface of the arena will create a 44,000-seater stadium, which will host the closing ceremony for the Games as well as the track and field events. It will return to 52,000 capacity following the end of the Games.

Work to reconfigure the stadium is expected to be finished by mid-May 2014 with the venue expected to play host to the 2014 Scottish Schools Athletics Championships in June.

“I’ve seen Hampden in its football format many times, but I never thought I’d see it like this,” commented 2010 Commonwealth 400m silver medallist Child. “It’s a spectacular transformation and I’m hugely excited to be competing here this summer. The thought of pushing down the home straight in front of a packed crowd inside our national stadium gives me goosebumps.”

Glasgow 2014 ambassador Jessica Ennis-Hill added: “Looking at the amazing athletics arena that is taking shape at Hampden Park, I am sure Glasgow 2014 will be a Commonwealth Games like no other. I know from the Olympic Games in London the importance of a home crowd and how much of a boost that wonderful support gave to the athletes.

“Scotland is famed for a passion for sport. I’ve been hearing today about the ‘Hampden Roar’ which I’m sure, combined with a fantastic looking standard of Athletes’ Village, will give those competing at Glasgow 2014 an experience they will never forget,” added the Olympic heptathlon champion who will not compete at the Games as she is expecting her first child.

“Today is the first time I’ve been inside the Athletes’ Village and it’s looking great,” said Child. “There’s so much open space and it’s nice to see the furniture from London 2012 being reused too. The Village is such an important area for the athletes and from what I’ve seen Glasgow could certainly be setting a new standard. I can’t wait until the teams all start moving in and bring the Village to life.”