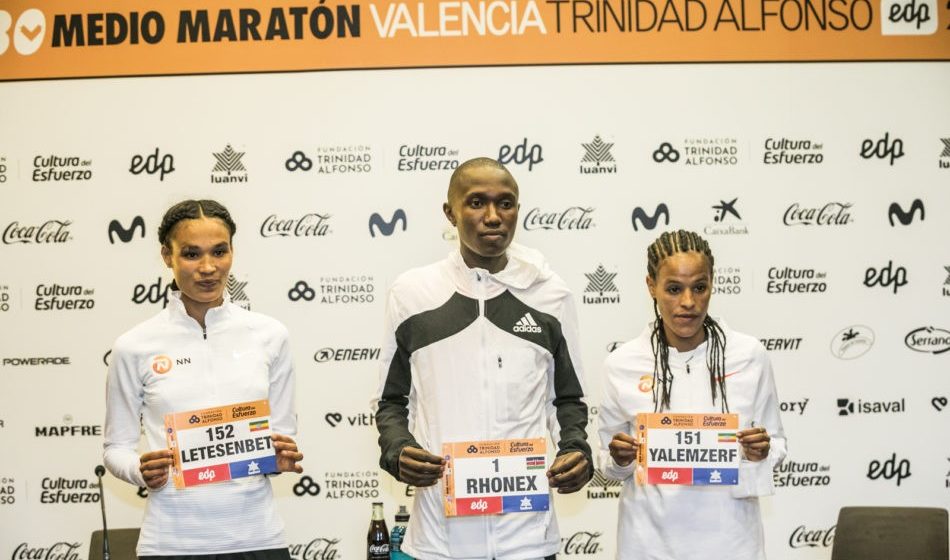 After finding out her world record of 63:44 from the Antrim Coast Half-Marathon in August will not be ratified due to the course being 54 metres too short, Yalemzerf Yehualaw will have to try to do it all again on Sunday (Oct 24) in the Trinidad Alfonso EDP Valencia Half Marathon if she wants to be known as the fastest woman on the planet at 13.1 miles.

World Athletics has not ratified the record she ran in Northern Ireland two months ago. So her new target this weekend will be Ruth Chepnegetich’s 64:02 which was set in Istanbul in April this year.

Yehualaw will not be alone either in the quest to put her name in the record books. Fellow Ethiopian Letesenbet Gidey is in the race and she will be making her half-marathon debut after world records at 5000m and 10,000m on the track in the past year.

Whether the record is 64:02 or 63:44, though, both women feel they have potential to go much quicker. When AW asked them at their pre-race press conference on Friday, both athletes paused to see if their rival would commit first before Gidey was prompted by the organisers and said: “I think for the future 62:30,” while Yehualaw predicted about one minute slower with 63:30.

It will be interesting to see who makes the first move when they actually begin racing at 8.30am local time in Spain on Sunday. They are from the same NN Running Team but have different coaches and will definitely be racing each other for the win.

Gidey, who set her world 5000m mark in Valencia with 14:06.62 in October last year, added: “I am confident that I can set the world record on Sunday.”

Yehualaw confirmed she had only just found out on Friday that her Antrim Coast mark had been disallowed and added: “I’m ready to get the record again … I’m in good shape, I’ve been training well. We’ll see on Sunday.”

If you consider that the Antrim Coast event was too short by only 54 metres, Yehualaw would probably have run inside Chepnegetich’s record anyway that day on an accurate course. Does that make her the favourite, though? Maybe not, as Gidey lapped Yehualaw at the Ethiopian Olympic 10,000m trials in Hengelo in June when she set a world record of 29:01.03 with Yehualaw clocking 30:20.77.

In addition, Gidey showed talent for the half marathon with a 44:20 world best for the 15km in Nijmegen in 2019.

They may not have it all their own way this weekend, though, as the field includes Sheila Chepkirui and Hawi Feysa, with Senbere Teferi withdrawing on the eve of the event.

In the men’s race the favourite is world 10km record-holder Rhonex Kipruto of Kenya – just one of nine runners who have cracked the one-hour barrier in the past.

“I’m very happy to be here, the training went very well and that’s why I’m here,” said Kipruto, who set his 10km record of 26:24 in Valencia last year. “For now, I am here to run under 58 minutes, which is a very demanding target.”

Facing him are Rodgers Kwemoi, Philemon Kiplimo, Abel Kipchumba, Kelvin Kiptum, Andamlak Belihu and world 5000m champion Muktar Edris among others and the event has a reputation for super-fast times with the 2020 race, for example, seeing four men dip under the world record at the time.

The 40th Rotterdam Marathon is also on Sunday with Belgium’s Bashir Abdi, the Olympic bronze medallist and training parter of Mo Farah, trying to beat the European record of 2:04:16 held by Kaan Kigen Ozbilen.

Marius Kipserem is also in the field and going for his third victory in the race. The Kenyan set a course record of 2:04:11 in Rotterdam in 2019.

Watch out too for Solomon Deksisa of Ethiopia, plus Emmanuel Saina and Gideon Kipketer of Kenya, while the women’s field is led by Kenya’s Bornes Kitur and Stella Barsosio.