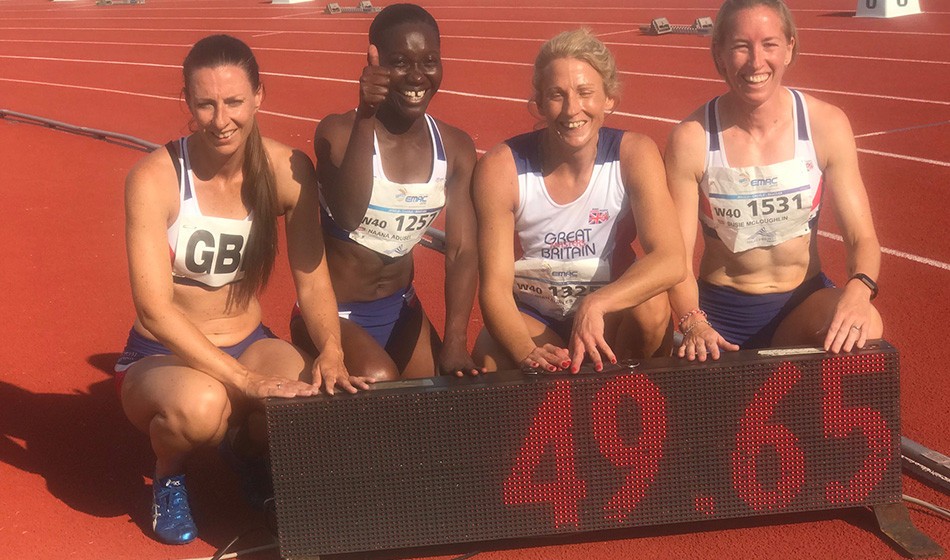 Britain won 13 gold medals on the penultimate day of the European Masters Championships in Italy.

First to strike was Britain’s W65 team who took gold by all of 17 seconds from Germany with a British record 62.00.

Saunders-Mullins also won her fourth medal, having come second to Powell in the three individual events.

Like Powell, two other British athletes were seeking their fourth sprint gold and with the M60 and M65 race being combined, John Wright and Steve Peters were drawn in the same race on the anchor leg.

It was Peters’ M65 team (backed up by Walwyn Franklyn, Ian Broadhurst and Simon Barrett) that got the baton well ahead of his younger team-mate, but he still showed what has made him an all-time sprinting great as he ran down the German M60 team to pip them by a hundredth of a second in 50.56 to smash the British record by over a second and win gold in the age group by over three seconds.

In combined M65 and M60 4x100m it is triple sprint champion Steve Peters who anchors GB M65s to a one hundredth of a second win over Germany’s M60 team in 50.56. GB M60 take bronze in 52.63 anchored by triple sprint winner John Wright @emacvenice2019 pic.twitter.com/ehXqfg6qef

Both Peters and Franklyn were in the 43.42 M45 winning world masters team from 20 years ago at Gateshead that still stands as the world record.

Wright come from a long way back after earlier legs from Trevor Wade, Tony Mitchell and Adrian Essex and finishing fast the M60 team took bronze in 52.63.

Also striking gold was the M45 team. Led off by Julian Ions, there was a stunning second leg from 200m champion Mike Coogan and the good work was finished by Craig Beecham and a strong anchor from Cieran Harvey. They were timed at 44.84 to Italy’s 45.01.

Another British squad to strike gold was the W40 team. They won by well over a second in a British record 49.65 (pictured).

In the M40 race, it seemed that Sweden, courtesy of a stunning second leg and changeover from double sprint champion Lion Martinez, had won gold in 43.95. However, they were later disqualified – seemingly due to a technical issue in their declaration according to the result sheet – and Britain, with fine legs from Alan Robertson, Dominic Bradley, Andy Parkin and Michael Barugh, won in 44.29 from Italy’s 44.61.

Horder won both hurdles titles on offer but for Filer, who won four golds in the last championships in Denmark but has been injured since last year’s World Masters and had to miss her gold medal events of two years ago, was delighted to contribute to a British medal with a fine second leg.

After earlier legs from Pat Logan, Ronnie Hunter and Glen Reddington, it was Don Brown, who had previously won gold in the two sprints and the sprint hurdles, who took the baton well back but drew gasps from the crowd as he caught Spain and Germany in his final stride.

There was a bronze for the W45 team of Deborah Ricci, Sharon Dooley, Amanda Broadhurst and Anita Saunders in 56.13 as they benefitted from Poland’s disqualification.

Ian Richards completed the full set of walking gold medals when he won the M70 20km walk gold in 1:55:37 and then added the team golds thanks to Peter Bosczo, who won his own fifth medal with a silver in 2:00:49, and Roger Michell, who was eighth in 2:16:03.

They won by 25 minutes from Italy.

Also striking gold was Cath Duhig. She won the W60 title in 2:11:28 to win by two minutes from France’s Maryse Philibert Chaves.

Duhig also medalled in the earlier walks and won a team gold alongside Ann Wheeler and Judy Howard in seventh and ninth respectively as they scored a four-minute win over France.

Another multi medallist is now Noel Blatchford, who followed up her 10km win with another gold medal success and her 2:25:58 gave her a three-minute win over Ukraine’s Antonina Tyshko.

In the field, Evaun Williams won her fifth gold medal of the week to match middle distance runner Clare Elms and walker Richards, though Peters and Powell look sure to join them tomorrow.

W40 Andrea Jenkins also won gold, her second of the championships, thanks to her 81-point win over France’s Anne Bazat.

Neil Barton won a M35 silver in the long jump with a 6.55m leap behind Germany’s Matti Herrmann’s 6.96m.

Cosmin Lupu of Romania won the M40 event with 6.40m though all the attention was on triple global senior silver medallist James Beckford. The Jamaican, who has a 8.62m PB, jumped 6.67m but was not eligible for a medal.

One of the world’s best ever long jumpers James Beckford (PB 8.62m) and a three-time global silver medallist is jumping as a guest in Jesolo in the M40 event @emacvenice2019 pic.twitter.com/UqUsuqNh6b

With the final day including the 4x400m relays plus the 10km and half-marathon, Britain are guaranteed third spot but Italy with a great home advantage in the road races should overhaul Germany at the top of the table.