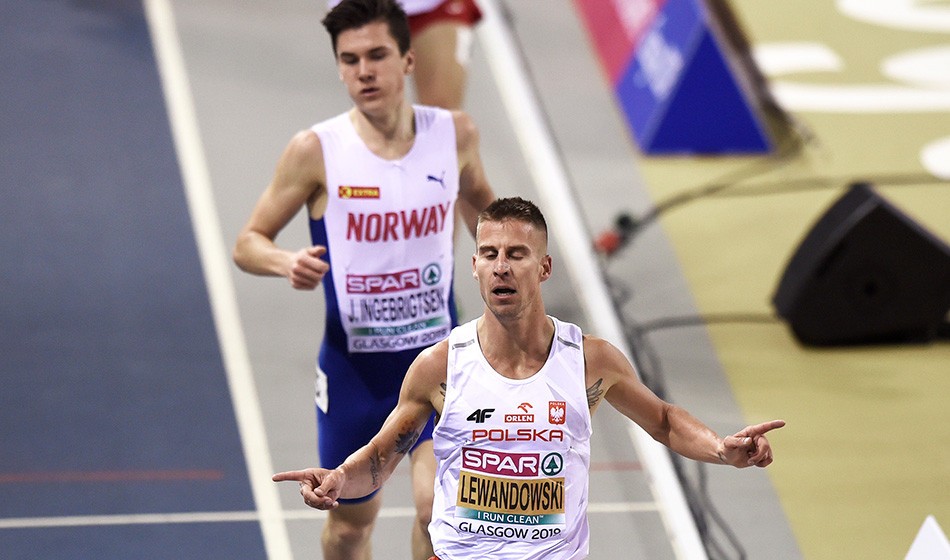 The 2021 European Indoor Championships looks like being a high-quality affair with the cancellation of last year’s Olympics, World Indoors and Europeans giving athletes a rare chance to win championship medals.

The doubts still remaining over the Olympics and the lack of those major events over the last year means most athletes who have ventured indoors this winter want to end their winter with something to show for it.

Of course by the time of Tokyo, everyone will have largely forgotten who won medals in Toruń but there are those in great shape now that they might regret missing the Polish event if they are injured at the time of the Olympics or have bad luck out in Japan and in some events go for medals which may be beyond them if they take on the likes of the leading Africans or Americans.

The one European country lacking many of their best athletes in Toruń is Britain. Dina Asher-Smith, Elliot Giles and Laura Muir top the European rankings but are focusing on getting it right for the Olympics and other medal hopes based on their 2021 race form such as Jemma Reekie, Jake Wightman, Marc Scott and Melissa Courtney-Bryant are also sitting it out.

This means Britain won’t match their medal total from Glasgow but they do encouragingly have a big squad full of promising young athletes and have been far more generous in their selection policies than they have mostly been in the past.

Based on our predictions we expect Poland (5 gold, 2 silver, 1 bronze) to top the tables from Netherlands (4, 3, 0) and Britain (2, 2, 5). Poland topped the medal table in 2019 so it would be no surprise to see them do even better with home advantage.

In our guide, we give the local start times of each event (the time in Toruń is one hour ahead of British time), the result of the last championships in 2019, the top five entered athletes and our prediction for each event based on a mixture of rankings and past major events.

In Glasgow 6.60 sufficed for victory but that won’t be enough in Poland as seven Europeans have broken that mark so far this year.

Kevin Kranz tops the rankings with his German championship victory and will be joint favourite alongside Italian champion Lamont Marcell Jacobs who has run no slower than 6.55 in five finals this winter.

Defending champion Jan Volko (6.61 this winter) will also be in the mix but there are a lot of athletes around the 6.60 mark.

Britain’s best hope is Andy Robertson (6.61) but he does have a 6.54 PB from 2016 and will hope the international competition he has lacked this winter might bring him on further.

The other two Britons Oliver Bromby (6.65) and Harry Aikines-Aryeetey (6.67) don’t rank in the European top 20 this year and would need a big improvement to even have a chance of making the final.

Defending champion Karsten Warholm is not entered and in his absence the favourite is the three-time world and three-time European champion Pavel Maslák. The Czech athlete won in Karlshrue and Madrid and is second ranked in Europe this winter.

Two years ago Liemarvin Bonevacia came last in his heat in 47.86 but is a much improved athlete judging by his top ranked win in the Dutch Championships and he looks the most likely challenger to Maslak.

Third place looks more open with French champion Thomas Jordier and Dutch No.2 Tony van Diepen next on the lists but Glasgow silver medallist and Spanish champion Óscar Husillos (46.37) has the better competitive record. Karol Zalewski, a world indoor 4x400m gold medallist will also be a factor on his home track

None of the British trio James Williams (46.60), Lee Thompson (46.65) and Joe Briar (46.81) rank in the top 10 and would do exceptionally well just to make the final but all are improving and should go faster on the quick Toruń track and have a good chance of making the semis.

Warholm’s 45.05 championships best from 2019 will not be challenged. 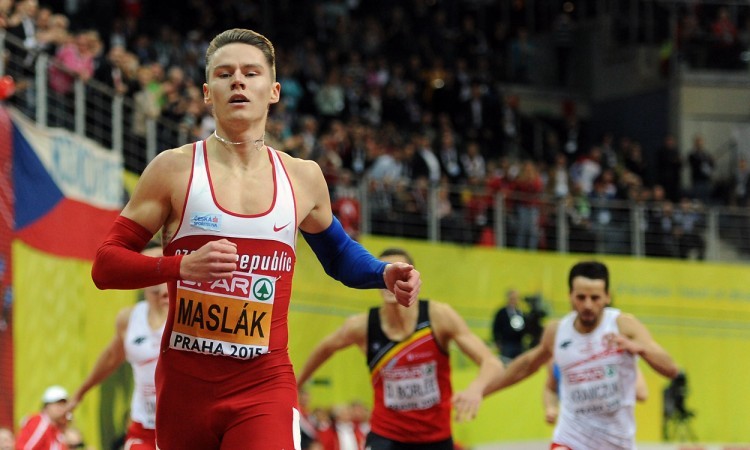 Though world leader Elliot Giles (1:43.63) was sadly a late withdrawal to focus on his Olympic preparation, this could still be the best quality track race of the championships.

Jamie Webb, second in 2019 and second to Giles in last month’s Toruń race, has also shown sensational from this winter and goes in with the quickest time of those competing.

Though he trailed the Britons by a distance in Toruń recently, proven championships contender Adam Kszczot will surely mount a more serious challenge this time round.

The reigning world indoor champion is on his home track and is going for his fourth European indoor title and is renowned as a fast finishing canny racer. His indoor PB though is slower than Webb’s at 1:44.57.

Sweden’s Andreas Kramer, who was second in the 2018 outdoor Europeans to the Pole, is also in PB form and an obvious candidate for a medal too and would prefer a faster race which might help Webb put pressure on the Pole Amel Tuka, a double world medallist outdoors who set a PB in Madrid last week. Meanwhile the former world outdoor champion Pierre-Ambroise Bosse looks like he is getting better race by race and you can’t discount Mariano Garcia who beat the pair of them with a brave run in Madrid.

Irish eyes will also be on 18-year-old Cian McPhillips (1:46.13) who pushed English all the way in the Dublin trial race.

Defending champion Álvaro de Arriba was only fifth in Madrid (1:46.93) last week but is always dangerous in a tactical race. The second Briton Guy Learmonth (1:46.73 indoor PB in Glasgow) was a finalist in 2015 but would need to go even quicker to replicate that here.

Last time in Glasgow, Jakob Ingebrigtsen left it far too late to wind the pace up and was easily out-kicked by Marcin Lewandowski and the Pole also pipped him for third in the World Championships in Doha in 2019.

When the Norwegian ran his top-ranked run in Lievin this year though he was five seconds ahead of the Pole but without pacemakers, it won’t be that emphatic with the Pole’s competitive ability, faster finish and home advantage meaning it might go down to the wire.

Lewandowski ran a Polish record in Toruń last month and ran 3:31.46 in Doha and on his home track will have the incentive of a fourth Indoor title at 800m or 1500m.

The biggest bonus for Ingebrigtsen is his brother Filip should be in the field and could help his title challenge by not allowing the race to be just a test of who has the fastest last 400m or 800m.

With Jake Wightman absent, the next in the rankings is fellow Doha finalist Neil Gourley who was a fraction down on the Pole in Torun and will be keen to make up for Glasgow in 2019 when he won his heat but missed the final through illness.

Others to look out for include Polish No. 2 Michal Rozmys and Glasgow bronze medallist Jesus Gomez.

The improving Piers Copeland (3:38.55) has an excellent chance of making the final though it might be tougher for Archie Davis (3:42.09) who is not ranked in Europe’s top 50 but the 22-year-old will benefit greatly from the experience.

George Mills has been entered as a reserve.

In Glasgow Jakob Ingebrigtsen won easily as he became the youngest ever European champion at 18 years and 163 days and now two years stronger, he should be too good for the opposition though he has not run a 3000m so far this winter.

His brother Filip Ingebrigtsen (7:54.33) is entered for this event as well and could well challenge for a medal in his own right.

Lewandowski is also entered in this event (which comes after the 1500m) and while he would be dangerous in a slow run race, it’s hard to see the non 1500m runners allowing a dawdle. He has run 7:51.69 this winter though so has clearly worked on his endurance as he aims to become the first ever athlete to win 800m, 1500m and 3000m titles.

The former Moroccan Mohamed Katir heads the rankings from when second in Karlshrue, but was only second in a very slow Spanish Championships and will want a quick race.

France’s Jimmy Gressier and Andrew Butchart are next in the rankings and will also prefer a faster pace. They were seventh and 10th in Glasgow last time.

The recent national records of Swede Andreas Almgren and Dutchman Mike Foppen show they too are in good form. France’s Djilali Bedrani (7:46.52), who was fourth in Glasgow, will also hope to be in the medals this time. And Ireland’s Sean Tobin (7:48.01), one of the best pacemakers on the circuit, could be a factor is his own right.

Marc Scott was initially entered but withdrew to race 5000m in the United States instead but Philip Sesemann (7:51.27) was entered as a reserve and could make the final along with British trials winner Jack Rowe (7:54.35). The latter is not ranked in the top 40 but judging by his win over Butchart in Manchester he could cause a shock.

Wilheim Belocian was only seventh in Glasgow but he tops the rankings and has clearly been the top European this winter and the former World and European Junior champion is out to win his first senior title.

Next in line on time is the world indoor champion Andy Pozzi who can take great heart from his return from injury with his Madrid run and will be keen to do better than his sixth in Glasgow.

The 2013 runner-up Paolo Dal Molin, the 2019 bronze medallist Aurel Manga and Poland’s Damian Czykier complete the top six in the rankings and should be among the finalists at the very least.

Defending champion Milan Trajkovic ran a 7.76 in America earlier in February but pulled out of a race in Torun on his return to Europe and has little hope of defending.

Former champion and 2019 runner-up Pascal Martinot-Lagarde (7.54) and Olympic silver medallist Orlando Ortega (7.64) have both run indoors though at a level well below their best and won’t run in Torun. 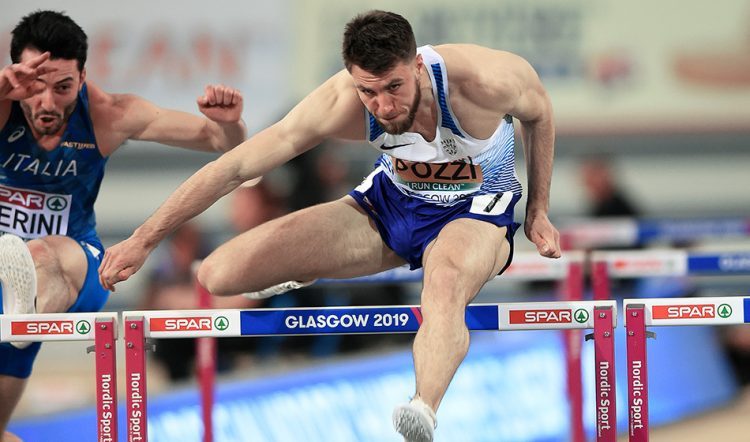 This could be a cracking end to the men’s championships and Poland have a great record at this event but with only one of their runners inside 46.80 this winter there are much faster teams on paper.

The Dutch have never had a great 4x400m pedigree in the past but their four fastest runners occupy four of the top 10 places in the European rankings including the top spot and should have too much firepower for the rest.

The Belgians defend their title and have the three Borlee’s among their squad but none have shown anything like their best form so far this winter.

The Czechs have a better team on current form with Maslak, and fifth-ranked Vit Muller with Patrik Som (46.58) with Michal Desenský (46.99) to back them up.

Britain can also boast a solid squad with four men in the 46.60 to 46.81 range but probably need someone to provide a Martyn Rooney-type anchor to challenge those with sub-46 performers.

Italy are the other team who qualified with a likely team of 46.57 to 47.11 performers.

Our previews for the European Indoor Championships also include: