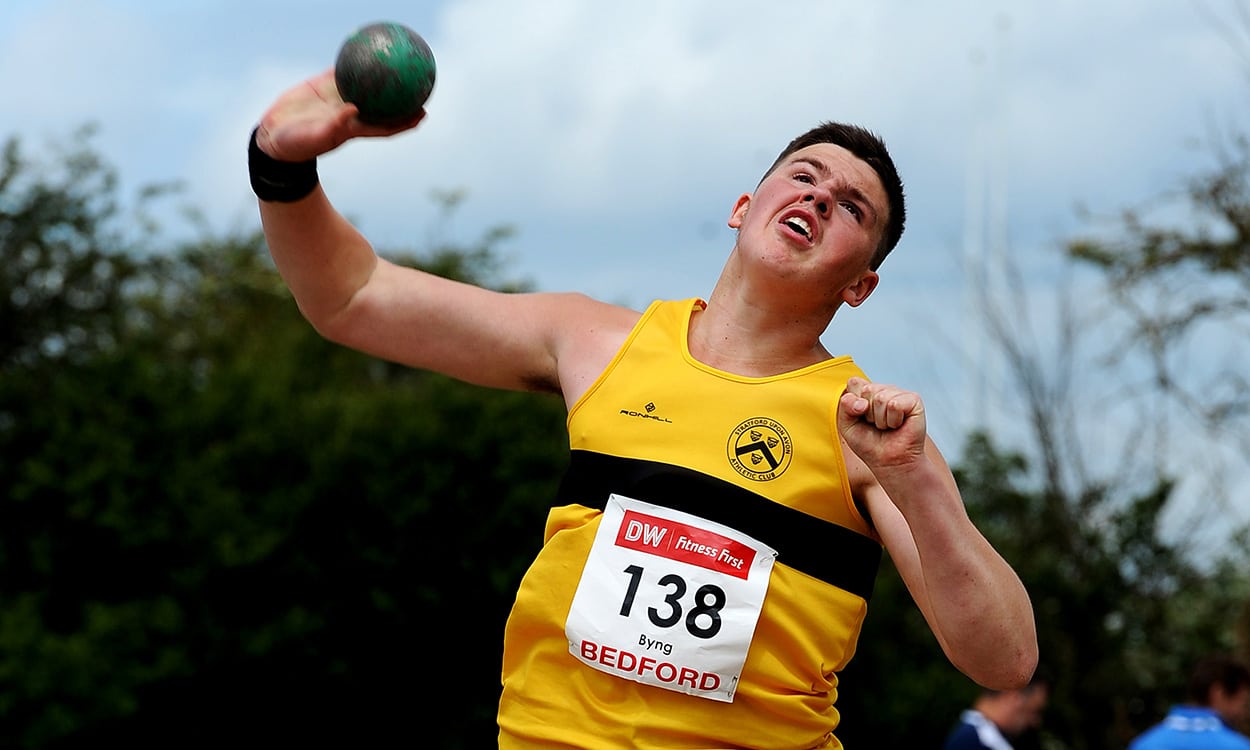 Reports on Müller Anniversary Games action in London can be found here, while Monaco Diamond League coverage is here.

Other recent events included the SIAB International in Scotland and there were some top performances by British and international athletes both in the UK and overseas.

Back in action after their wins at the European U18 Championships and English Schools event in Birmingham, Raphael Bouju and Dominic Ogbechie were among those to again secure success in Scotland.

Going up against school-age teams from Ireland, Scotland and Wales, the duo helped the England team to overall victory with 34 gold medals, 26 silver and eight bronze for 540 points.

Bouju, who won gold for Netherlands in Gyor, claimed the SIAB 100m title by two metres in a windy 10.64 (+3.4) while Ogbechie, who won the high jump at the European event and 200m in Birmingham, again won in the half-lap event with a time of 21.70.

Lewis Byng (pictured, top) – who features in our magazine’s latest Dip Finish page thanks to his multiple talents – was seventh in the European U18 event but gained gold at the English Schools. In Scotland he improved on his PB of 18.86m from Loughborough in June with a huge throw of 19.40m to win by more than two and a half metres.

That mark puts him fourth on a UK under-17 all-time list headed by Carl Myerscough with 21.20m.

Holly Mpassy won the 300m clearly in 38.93 to reverse her Birmingham loss to Hannah Foster while there was another English one-two in the 80m hurdles where Emily Bee – with a PB 11.02 to go equal third all-time in the UK under-17 lists – and Marcia Sey also swapped their English Schools form.

Ellie O’Hara achieved another Scottish under-17 record performance in the triple jump with a 12.46m leap. It was a championship best performance and claimed her an award for the best female performance of the day.

» See our next magazine for more

Jamaine Coleman achieved a European Champs 3000m steeplechase qualifying time with a PB of 8:31.91 behind his fellow Brit Zak Seddon who was seventh in 8:31.60.

Reigning European champion Bruno Hortelano was forced to miss the 2017 season after sustaining severe hand injuries in a car crash just after the Rio Olympics but he is showing fine form this summer. After already breaking the Spanish 400m record with 44.69 in June, he improved his national 200m record to 20.04 in the semi-finals in Getafe and then won the final in 20.15.

Teenager Martyna Kotwila won the 200m title in 22.99 to break the long-standing national under-20 record, while Ewa Swoboda won the 100m title in a wind-assisted 11.12.

The women’s long jump title was claimed by Malaika Mihambo with a leap of 6.72m, while Konstanze Klosterhalfen continued her comeback after injury with a 1500m win in 4:06.51.

The local girl from Eryri Harriers etched her mark into the history of the popular mountain race, winning the 43rd edition of the event over the highest peak in England and Wales.

Martha Grant was the next lady home competing for Scotland but is based in Snowdonia and a club mate of Jenkinson’s at Eryri Harriers.

Sophie Noon from Cumberland Fell Runners was third, leading her England team home, but it was Grant’s Scotland team that scraped victory over England.

Englishman Chris Smith had hoped to repeat his win in Snowdon from two years ago. The Londoner built a 40-second lead at the summit over countryman Chris Holdsworth.

However, despite being in third place at the turn-around point, Italy’s Alberto Vender came through the field on the descent and was the first man back to Llanberis in 66:41, leading his team to victory.

Holdsworth overcame Smith and Welshman Rob Samuel to take second and with Llanberis man Samuel scoring a first podium finish at the race in third.

» Further coverage and results in the July 26 edition of AW