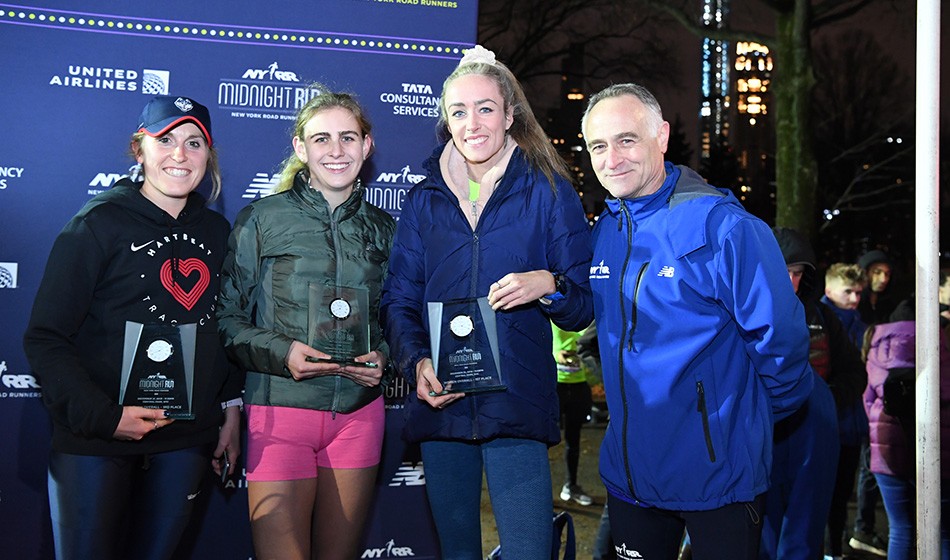 Clocking 20:50, the Scot finished ahead of the returning Mary Cain in 21:43, while her fellow American Lindsay Crevoiserat was third in 23:20.

McColgan’s mark broke the course record, improving on the 20:51 run by Desiree Linden in 2010.

“The Midnight Run in New York was a great way to kick off my 2020 year. It was a pretty tough course around Central Park but really good fun,” McColgan told AW.

“My family are over in America for two weeks so we were doing a lot of sightseeing, but I managed to persuade two of my siblings to run the race with me! Definitely not ideal race preparation – climbing up the Statue of Liberty – but it was a great way to start the new year and split up our family holiday.”

What a way to bring in the New Year🎉 🇺🇸

With a midnight race around Central Park! 🏃🏼‍♀️ Crazy experience, but we loved every minute of it!

Longest day of my life – think we covered about 7miles of walking in the morning, including over 700 steps to the Statue of Liberty crown!🗽 pic.twitter.com/l3xn2LQRvH

Thousands gathered in Central Park for the event, which has seen athletes such as Britain’s 1984 Olympic silver medallist Wendy Sly triumph in the past and starts to the sound of fireworks as the clock strikes midnight.

Following her win at the Clevedon AC Boxing Day Races, triathlete and duathlete Emma Pallant claimed another victory as she clocked 34:47 to secure 10km success. The men’s race was won by Fulham’s Charlie Sandison in 31:52.

Lincoln Wellington’s Lucian Allison won the men’s race in 29:40, while the women’s win went to Georgina Weston as the Rotherham Harriers runner clocked 36:42.

Swansea’s GB international runner and orienteer Kris Jones claimed his third victory at this 5km event, clocking 14:15 to win ahead of Cardiff’s James Hunt in 14:37.

Great atmosphere again this year – pleased to see out the year with a win! https://t.co/WsfXgID4xr

Triathlete Grant Sheldon and Corstorphine’s Tom Martyn both clocked 18:46, with Sheldon getting the nod to retain his title.

Fife’s Annabel Simpson won the women’s race in 21:30 ahead of Jill Stephen of Hunters Bog Trotters (22:39).

Kenya’s Brigid Kosgei won the women’s race by more than a minute, clocking 48:54 ahead of Sheila Chelangat with a time of 50:10. It was Kosgei’s first race since breaking the world marathon record in Chicago.

Kenya’s Kibiwott Kandie won a much closer men’s race in a course record of 42:59, beating Uganda’s long-time leader Jacob Kiplimo by one second.

Belgium’s Bashir Abdi won ahead of Uganda’s Mande Bushendich, clocking 27:47 to 27:51 on the overall downhill course.

» Click here for further coverage of events over the festive period, including the Ribble Valley 10km, won by Marc Scott and Jess Judd, plus the Corrida de Houilles 10km and San Silvestre de Lisboa 10km