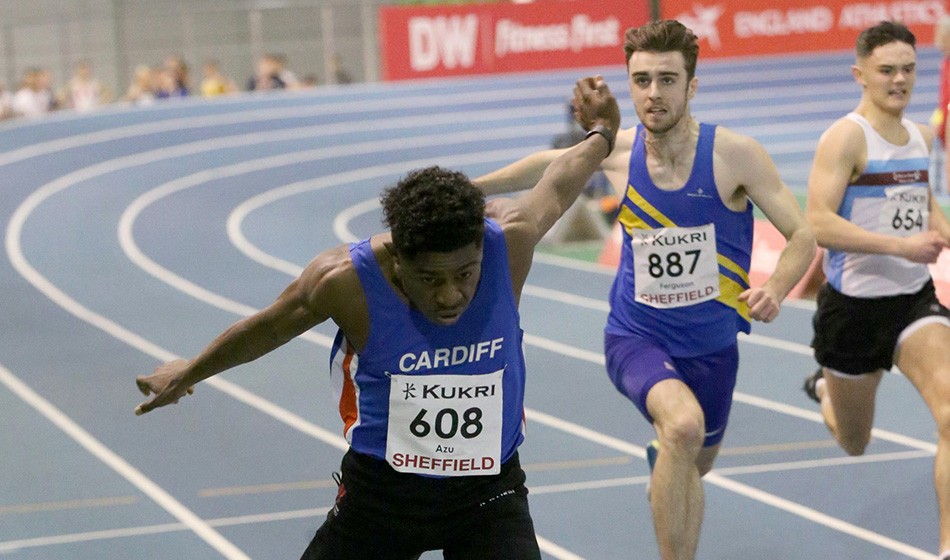 Highlights from U20, U17 and U15 action in Sheffield, plus performances including a world 600m best by Donavan Brazier at the US Championships

While some of the UK’s top cross country runners were in action at the national championships (report links below) there were a number of other top performances both in the UK and overseas, including a world 600m best by Donavan Brazier.

Emilia Rock broke a British indoor best as she clocked 39.74 to win the under-15 300m title and improve on Amber Anning’s previous best mark of 40.32 from 2015. Holly Mpassy won the under-17 title in 38.50 to go second on the all-time UK rankings behind Amy Spencer and ahead of Katarina Johnson-Thompson.

Lucy Hadaway improved by one centimetre the under-20 long jump championship best set by Katarina Johnson-Thompson in 2012 as she soared out to 6.31m in the fifth round to take the title and move to second on the UK indoor all-time list for the age group after Johnson-Thompson’s 6.39m.

It was a busy and successful weekend for Abigail Pawlett as she set three PBs to win the under-17 long jump with 5.89m and the high jump with 1.76m, plus secure silver in the 60m hurdles with 8.51. The hurdles winner was Lucy Jane Matthews in 8.48.

The multi-talented Dominic Ogbechie won his 14th national title as the 16-year-old claimed long jump victory with a PB of 7.59m.

Toni Ademuwagun, who is the son of former European junior long jump champion Yinka Idowu, cleared a PB of 2.11m to win the under-20 high jump.

Serena Vincent added the under-20 shot put title to her under-17 gold from last year, throwing a 14.83m PB. Lewis Byng won the men’s title with his throw of 17.79m.

Lily Carlaw broke the under-15 girls’ championship best with her throw of 13.78m.

Donavan Brazier and Athing Mu both stormed to 600m success, with Brazier breaking the world indoor best with 1:13.77 and 16-year-old Mu running 1:23.57 for the second fastest ever mark, just 0.02 off of Olga Kotlyarova’s world best from 2004.

Ryan Crouser won the shot title with a throw of 22.22m, while Vashti Cunningham cleared 1.96m to claim her fourth consecutive US indoor title.

Katie Nageotte retained her pole vault with her 4.81m clearance, while Demek Kemp won the men’s 60m in 6.55 and Shania Collins won the women’s in 7.16.

Clayton Murphy and Ajee Wilson won 1000m titles in respective times of 2:20.36 and 2:34.71, while Kendell Williams won the pentathlon with 4496 points and Tim Ehrhardt the heptathlon with 5868 points.

In the space of around half an hour, Grant Holloway won both the 60m and 60m hurdles in 6.54 and 7.44 respectively. He also finished a close second in the long jump competition the day before, leaping 7.84m.

Armand Duplantis cleared a then world lead of 5.92m to win the pole vault.

Harry Hughes returned after 18 months out with a shoulder injury to throw a javelin PB of 78.89m for the best mark by a Brit since 2012.

Taylor Campbell won the hammer competition with a throw of 73.21m.

Jacob Fincham-Dukes leapt a PB of 7.99m to win the long jump and move to eighth on the UK indoor all-time list.

Samuel Chebole and Beatrice Chebet won the under-20 races.

Running for England, Doug Musson was the top Brit in fifth and clocked 64:55 on his half-marathon debut, finishing one place ahead of ultra runner Tom Evans with a 65:21 PB.

Awesome day out at Granollers Half Marathon, a hilly and hot course but managed a PB by exactly one minute! Thank you @EnglandAthletic for the opportunity. Getting to line up against the current 1/2 marathon world record holder was pretty special. pic.twitter.com/poJDHsFIjV

Three world records were broken on the first day of competition.

After setting a world W55 800m record on Wednesday and a world 5km road best on Friday, Clare Elms took three seconds off the world 1500m record with 4:50.75, which is faster than the outdoor record, to win the W35 race by 15 seconds in a solo run.

Racing for the first time this year, Zharnel Hughes ran in the 4x400m and clocked a split of 45.5.

» Further coverage and results in the February 28 edition of AW