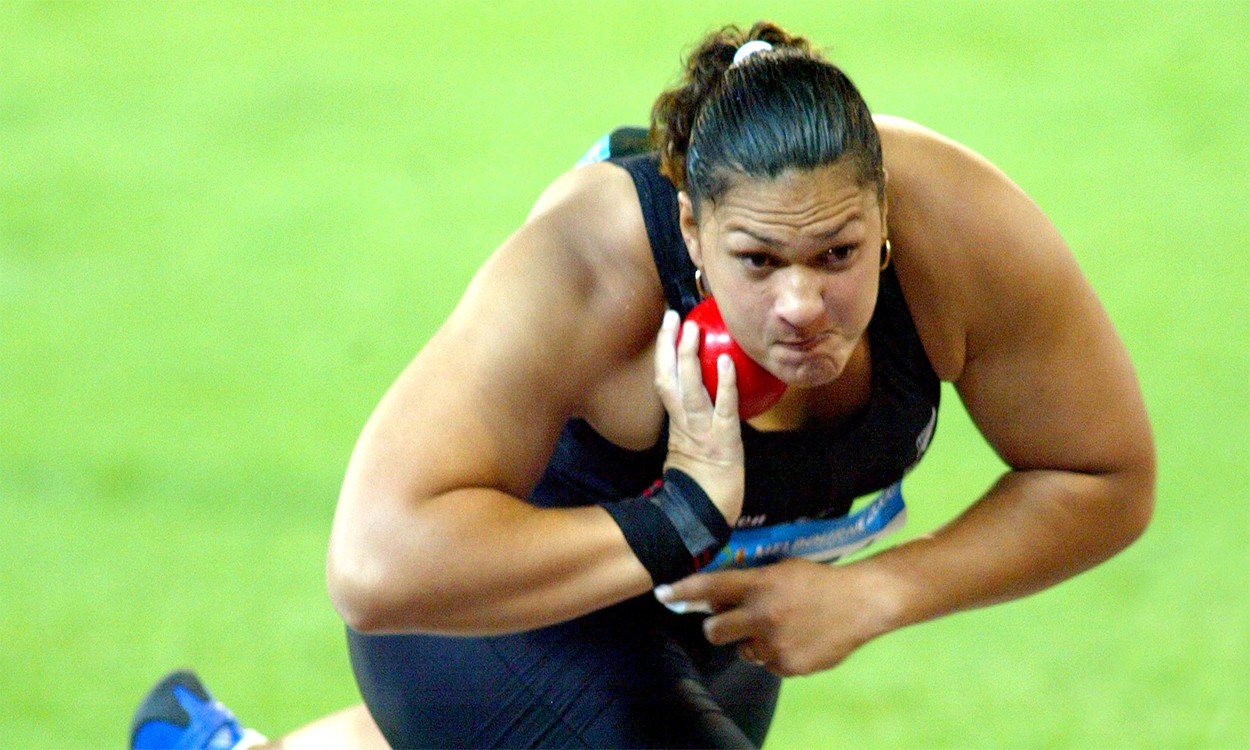 The Commonwealth Games aren’t renowned for innovation and the first shot and discus was held in Vancouver in 1954, 16 years after the European Championships introduced it. New Zealand’s Yvette Williams was a class apart and she won the shot by a metre and the discus by five on a day she also won the long jump! England’s Suzanne Allday was second and then won the 1958 event in Cardiff to fight off strong New Zealand competition and the bronze medallist Valerie Sloper won the shot by a metre with 15.54m with Allday second.

Sloper became Young for the 1962 event in Perth and retained the shot title and added four metres to the discus Games record with 50.20m. Allday won bronze in the shot, one place up on Northern Ireland’s Mary Peters, who threw 13.31m. In Kingston in 1966, Peters had improved three metres but had to settle for second behind Young’s 16.50m which gave her a third successive gold. Young also won a second successive discus gold as she narrowly won from Australia’s Jean Roberts who had been second in the shot in 1962.

Fourth in the discus was Rosemary Payne and, four years later in Edinburgh, the Scot threw almost seven metres further to win in a record 54.46m, with Roberts again second but three metres back. The shot was closer and Peters won by 6cm from New Zealand’s Barbara Poulssen with Roberts third.

Four years later in Christchurch, Canada’s Jean Haist pulled off double gold. In the shot, she saw off Young, who won her seventh Commonwealth medal on her comeback. She beat Roberts into third as Peters was fourth. Haist threw a record 55.52m in the discus with Payne putting up a good defence with 53.94m and Roberts missing a medal by 4cm.

In Edmonton in 1978, there was a huge improvement in the Games discus record as Canadian  Carmen Ionesco threw 62.16m. Australian Gael Mulhall took silver and the next day Mulhall set a Games record in the shot with 17.31m to comfortably defeat the Canadian.

Judy Oakes won bronze for England and four years later in Brisbane she upped the record to 17.92m to defeat Mulhall. Mulhall was also second in the discus but was well beaten by Meg Ritchie, who improved the record to 62.98m to give Scotland gold. In Edinburgh in 1986, the previously drugs-suspended Mulhall, now Martin, regained the title off Oakes by 25cm with a record 19.00m throw and Myrtle Augee won a second English medal. Martin also won the discus but was given a fight by Venissa Head of Wales.

Oakes was back on top in Victoria in 1994 with Augee second and Vizaniari third. The latter was only sixth in the discus as Australia’s Daniela Costian upped the record to a classy 63.72m with New Zealand’s Beatrice Faumuina a distant second.

In Manchester in 2002, Nigeria’s Vivian Chukwuemeka won by 8cm from world junior champion Valerie Adams. New Zealand did win the discus, though, as Faumuina comfortably retained her title.

The 2006 event at Melbourne saw South Africa gain their first title in the event as Elizna Naude won with 61.55m. In the shot, Adams, who was now called Vili, easily reversed positions with the Nigerian and set a Games record 19.66m. She won again in 2010 in Delhi, improving the record to 20.47m. In the discus, Krishna Poonia, who was fifth in Melbourne, led an Indian clean sweep.

Most successful athlete and Briton: In the shot Valerie Sloper (nee Young) and Judy Oakes both won three golds, but the latter also won two silvers and a bronze. In the discus Beatrice Faumuina won two golds and a silver and both Suzanne Allday and Rosemary Payne won a gold and silver.