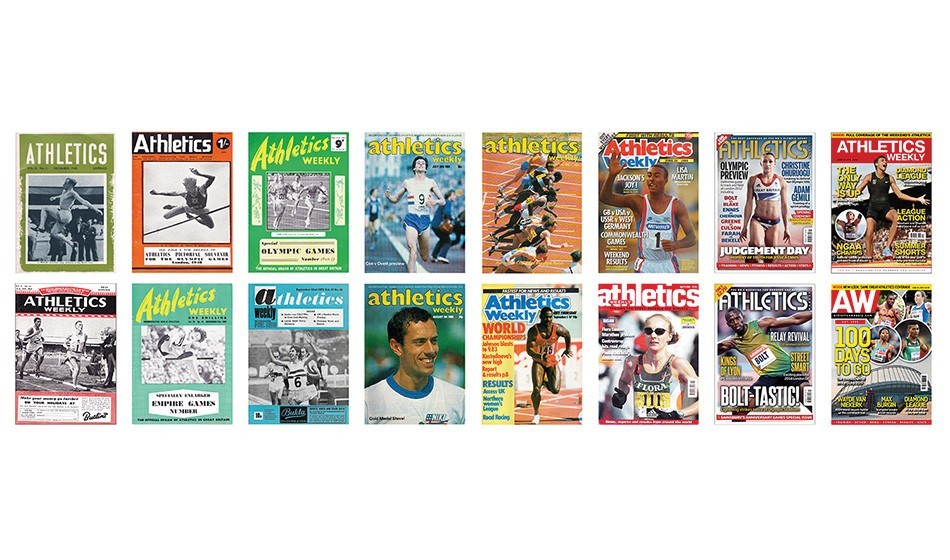 As the world’s No.1 athletics magazine prepares to relaunch, our editor picks some of his most memorable covers from over the years

During the last 75 years more than 3500 issues of AW have been published. That’s a lot of front covers to whittle down into a top 10.

Our covers over the years have featured Olympic medallists and world record-holders, teenage prodigies and leading masters athletes. There have been inanimate objects such as stadia and Olympic cauldrons. Not only have we featured runners, hurdlers, jumpers, throwers and race walkers, we once ran a ‘parkour’ cover and unusual former cover stars include motor-racing star Lewis Hamilton.

One of the quirkiest was a picture of a youngsters’ cross-country race which was ‘photo-bombed’ by a small terrier dog. As for the most frequent cover star, it has to be Mo Farah with more than 60 covers and counting, whereas Paula Radcliffe, Jessica Ennis-Hill, Dina Asher-Smith, Katarina Johnson-Thompson and Usain Bolt have also had dozens of front cover appearances between them in recent years.

Without further ado, here are some of my favourites.

The magazine was monthly from 1945-50 and the first issue featured a little-known long jumper. Curiously, it was described as ‘Vol.2, No.1’ as well, which was a white lie by the creator and publisher of ‘Athletics’, as it was known originally, to get around post-war rationing rules that made new publications forbidden.

Milestone issues are always important and our 70th anniversary magazine was packed with tributes and nostalgia features. Working at AW is definitely a marathon not a sprint and these celebratory issues are hugely rewarding. 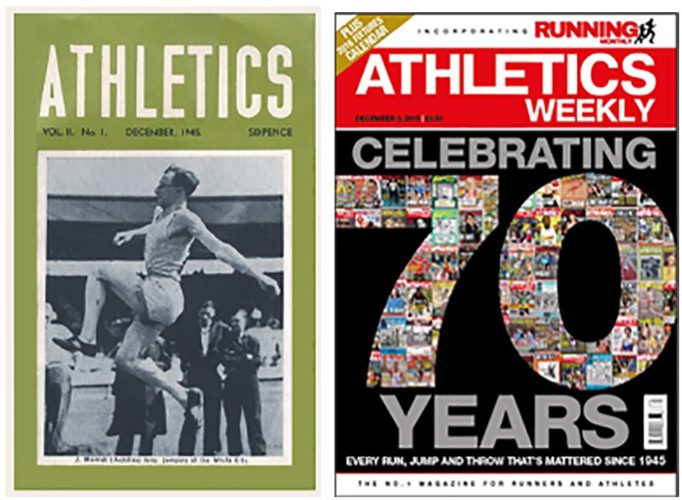 Mick Morton is seen storming to gold in the junior race at the World Cross Country Champs in Glasgow, but little did we realise at the time the ambitious 18-year-old Moroccan just behind him – who eventually faded to 34th, more than a minute behind the winner – went on to win the Olympic 5000m title six years later and set world records for 1500m, 3000m and 5000m.

In nearly a quarter of a century at AW the most enthusiastic reaction I’ve ever experienced from our readers was when our 2004 ‘sub-4 special’ came out. The magazine was published on the 50th anniversary of Roger Bannister’s first sub-four-minute mile and we had worked on it for months, packing it with big interviews with supermilers like Seb Coe, Hicham El Guerrouj and of course Bannister himself. 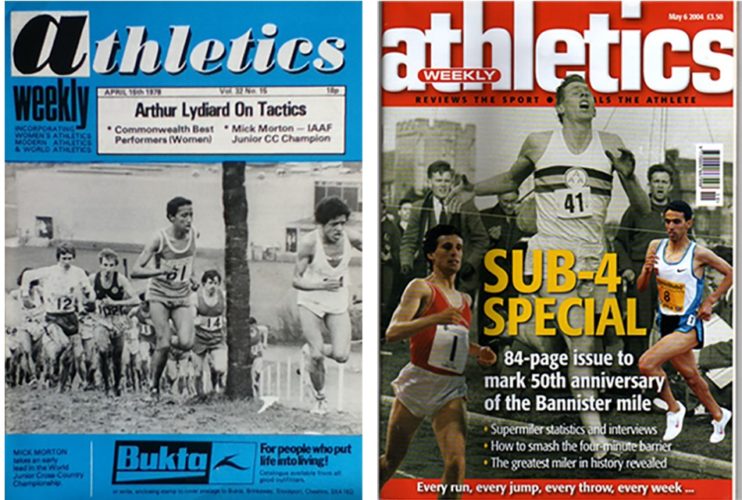 This is one of the most aesthetically pleasing covers from over the years featuring one of the top British distance runners who I looked up to as an athletics-obsessed teenage runner in the mid-1980s. Tim Hutchings was a supreme cross-country runner and he is pictured en route to winning the English National title on Town Moor, Newcastle. It is also one of many cover photographs shots taken by the prolific Mark Shearman.

Another quirky cover with hammer thrower Mick Jones – a genuine strong man and great character in the sport – lifting four of his kids on his shoulders. We later had one or two complaints from killjoys saying it was a ‘dangerous stunt’, whereas the athlete himself went on to win Commonwealth gold 12 months later in Manchester. 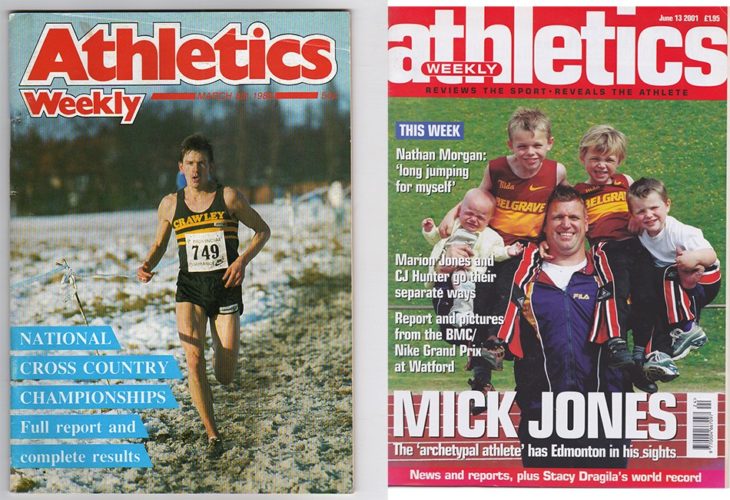 Yet another ‘Shearman shot’ as Cumbrian runner Paul Taylor makes a splash in the Inter-Counties in Leicester. This issue means a lot to me generally, though, as it includes my name winning a county cross-country title and I’m also in the Inter-Counties results – albeit buried two minutes behind winner Darren Mead! There is also a great colour photo inside of my future publisher, Wendy Sly, alongside Zola Budd, who I later wrote a book about.

You might notice an Eighties theme here. But this is a very personal list and those were my ‘formative years’. I was a budding 800m runner, too, with Brazilian Joaquim Cruz at the height of his powers as Olympic champion and he is pictured here in a photogenic blue kit with ‘Pepsi’ on his singlet. Like many covers of that era as well, the cover words were minimal and did not even mention the athlete’s name. 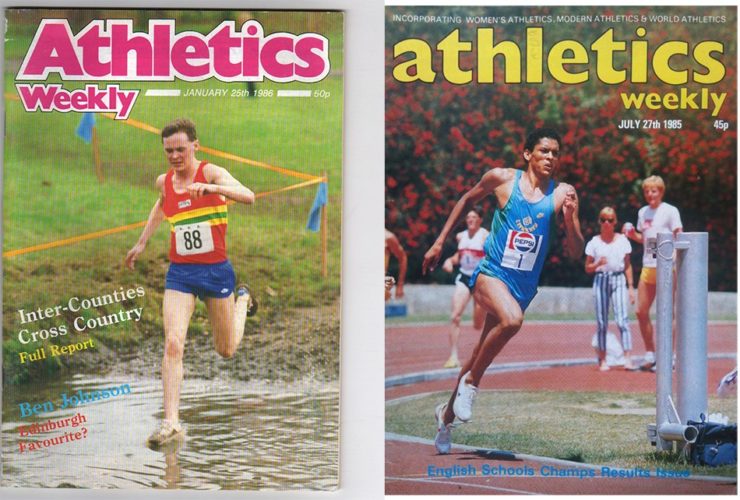 Big-name athletes usually result in more magazine sales but I’ve always enjoyed showcasing athletes from so-called Cinderella events, or promising youngsters or amazing veterans. Here Steve Peters, who has since made a name for himself as sports psychiatrist, battles with rival M50 sprinter Wally Franklyn as they demonstrate that athletics is a sport for every age.

When London bid to stage the 2012 Games they were expected to lose to Paris. But Britain never gave up hope and we were among those who lent support and encouragement to Seb Coe and his bid team as they achieved a momentous victory 15 years ago. 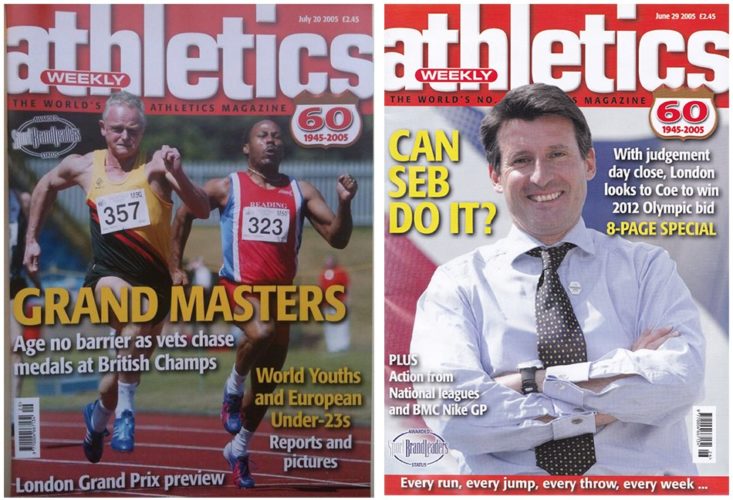 What’s your favourite cover in AW history? Let us know via our social media.

AW is relaunching… but before we look forward, let’s take a look back.

What is your favourite ever AW cover? (Still got the magazine? Pop a pic in the replies!) 🤩 pic.twitter.com/RPBfIkTXT3