The road to London: Remembering your first marathon 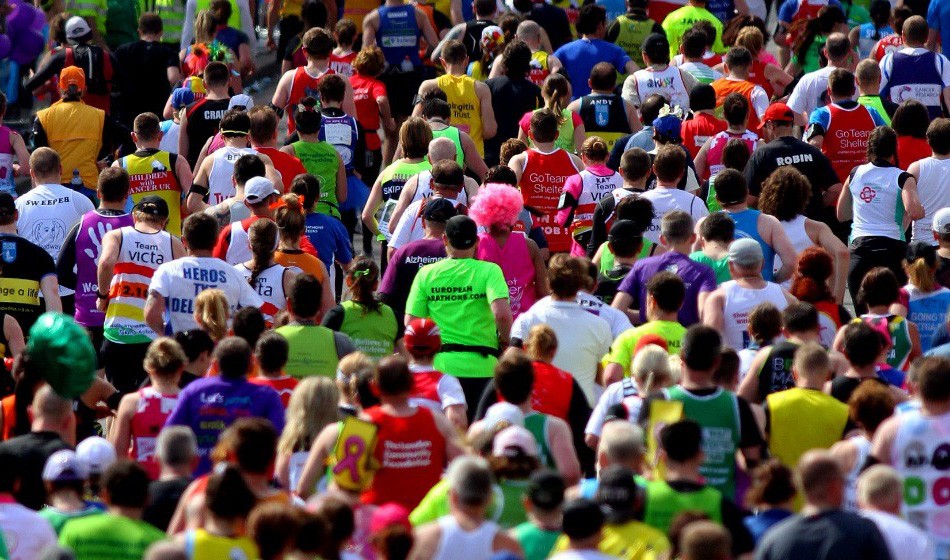 To open a regular training blog, AW’s Euan Crumley asks which lasting memory has been left on you by covering 26.2 miles

A baggy cotton t-shirt, football shorts and a look of barely disguised terror. That was the ‘race’ outfit I wore the first time I took on the marathon.

Thinking about it makes me cringe a little. I’ve covered many miles and completed many races since and would like to think I’m a completely different runner compared to that newbie who had followed a ‘get you round’ plan closely, read just about all he could on the process of covering 26.2 miles and yet still clearly knew little of exactly what he had let himself in for when lining up in London with tens of thousands of other runners back in 2001.

However, although my now 42-year-old self would leave that younger model trailing in his wake, part of me envies him. After all, you only get one first marathon and this may sound a little dramatic but it’s true to say that that man in his mid-twenties was about to embark on a journey which would change many aspects of his life.

He had so much to learn about – and through – running and has been trying his best to do so ever since.

That spring morning of almost 19 years ago has been coming to mind rather often recently, largely due to the fact that I’m back in marathon training again. In a little under 15 weeks I’ll be lining up at the London Marathon start line for a fifth time and harbouring a feeling of unfinished business – that there is still much to learn.

This will be my ninth marathon in total but I’ve found that, even with a reasonable amount of experience, beginning a training plan always brings with it a healthy dose of apprehension to go alongside the excitement.

Part of the event’s charm is that, for everything to go well, you need so many things to line up in your favour – from getting the right race day weather to avoiding any sort of illness or injury. Most important, of course, is managing to produce a consistent block of training which is suited to what you want to achieve.

Even getting that balance right is, in itself, a difficult skill to perfect. Push too hard in one respect and you could burn out or break down, don’t push hard enough and you could miss that target you want to hit.

Marathon running can be such a frustrating activity but so incredibly rewarding and fulfilling all at the same time. I’m hoping that this attempt at London, an event being staged for the 40th time, will fall into the latter category but there’s no way of knowing the ending to the story until some point on April 26.

Regardless of the outcome, it will be a road worth travelling and I’d like to invite you along. Via this blog, I will provide regular updates on my training progress – good or bad – and touch on topics that will hopefully resonate with those of you who are currently on your own marathon journeys or just know what it’s like to pits your wits against a distance which is always to be respected.

I’d love to involve and hear from as many of you as possible – about your experiences, your training tips or running advice – so for this opening blog it seems apt to raise this question to you… Do you remember your first time?

What is your abiding memory of that debut marathon? Mine is of seeing my then girlfriend’s (now wife) face in the crowd as I passed the Cutty Sark in a state of near disbelief that I was actually taking part in the London Marathon. Oh, and not being able to walk downstairs properly the following day is also something that I’ll never forget.

Let me know the lasting mark that was left on you by this most classic of endurance distances.

My training plan for 2020, which I’ve just begun, will be based largely around the schedule outlined by Steve Smythe’s excellent article published on this very website and I’m really looking forward to what is about to unfold as the miles pass by. Just don’t expect cotton t-shirts or football shorts to be mentioned very heavily from this point onwards!

Good luck in your training and happy running.