The secrets behind AW’s success 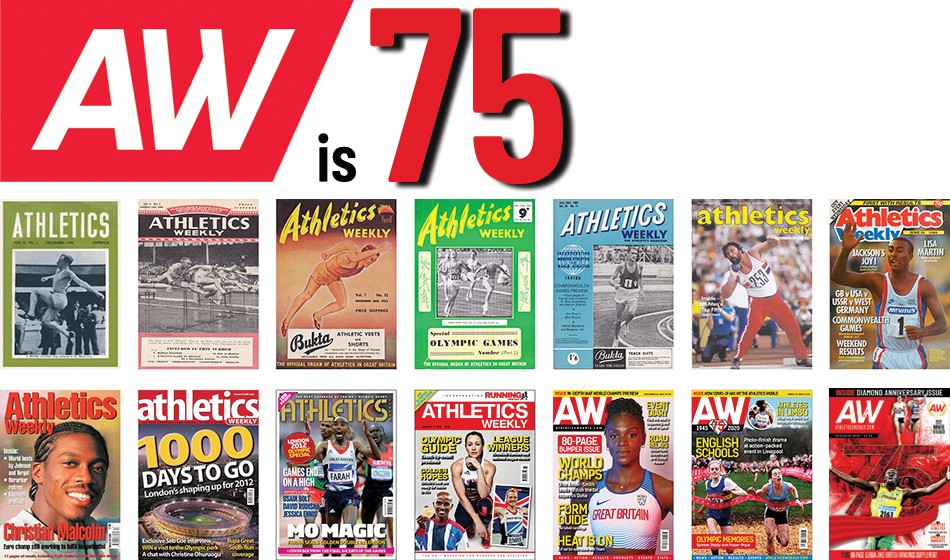 As the magazine celebrates its 75th anniversary, its long-time editor explains its enduring appeal

After 75 years, an estimated 3500 issues and approaching 200,000 pages, it took a global pandemic to temporarily halt the prolific publishing record of AW this year. Since it was created in December 1945, the magazine has faced numerous hurdles such as power cuts, staff illnesses, computer and machine problems, plus printing, postal and rail strikes. Yet ultimately it was a virus that knocked AW off its stride.

This winter AW has been reinvented as a monthly magazine with a beefed-up online offering. In a way we have come full circle, because the publication was originally called simply Athletics and on sale every month through the late 1940s before turning weekly in 1950.

World War II had just ended when the magazine was born. Post-war rationing was in force and from his humble bungalow in Kent a club runner and ex-RAF man called Jimmy Green began to turn his idea of an athletics ‘periodical’ into reality.

Initially he was told by friends and fellow athletes that it would not work. “I thanked them for their advice and completely ignored it,” he later said. “I was pig headed.”

The sport has been in his debt ever since. His persistence led to the creation of a publication which would go on to cover the No.1 Olympic sport for the next three-quarters of a century. From Roger Bannister to Usain Bolt, it has chronicled all the great performances and events. As television commentator Alan Parry once said: “If it isn’t in AW, it hasn’t happened.” 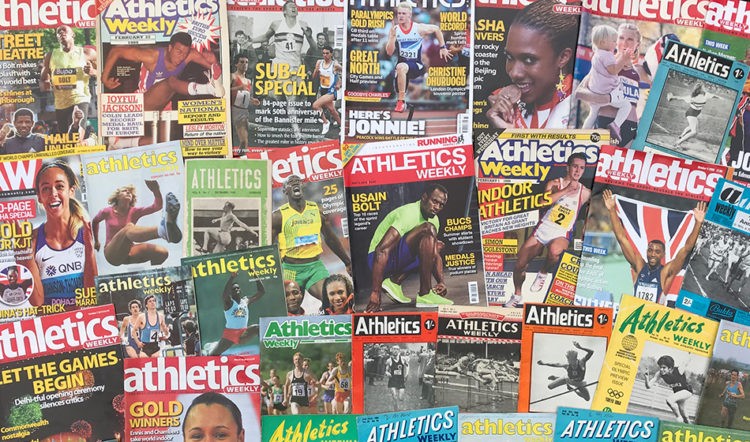 When AW was created the sport was played out on cinder tracks with measurements in feet and inches and times taken on a hand-held stopwatch. The sub-four-minute mile was still a dream and the men’s marathon world record stood at a mere 2:26:42.

London had not even staged the 1948 Olympics, let alone the 2012 Games, and it would be a further 25 years before the first Paralympics would take place in 1960. In women’s athletics, the longest footrace at the Olympics was 200m. Since then the four-minute mile has become relatively commonplace, we have seen the previously unimaginable two-hour barrier for the marathon broken, albeit in controversial circumstances, while women are now able to tackle a full range of track and field events.

The late, great Ron Pickering described AW as his “life-line, dictionary, thesaurus and bible”. The magazine has also been an historian of the sport with its pages containing more information than dozens of full-blown books put together.

After dutifully reporting on the exploits of athletes for several decades, due to its longevity AW has inevitably become part of the sport’s history itself. To reflect this, when I became editor of the magazine in 2001 one of the first things I wanted to do was give Mel Watman – arguably the most knowledgeable and esteemed of AW’s former editors – a generous amount of space in a six-part series on the magazine’s journey through the years.

So how has AW managed to keep going all these years? Most countries, after all, do not have an athletics magazine at all. Yet Britain has been fortunate to maintain one for 75 years.

Plenty of people have predicted AW’s demise. From the pessimists who told Jimmy his idea would never work to the doom-mongers of recent times who are convinced the internet will see us off, the sport is never short of naysayers. Ironically, though, the magazine has outlived many of them and I am convinced it will continue to thrive as long as there is a thirst for athletics news and results.

For starters, we are never short of anything to write about in AW. People have often asked me over the years if I’ve struggled to fill the magazine and the answer is absolutely ‘never’. Even at the so-called quieter times of the year there are plenty of stories to sate the appetite of readers. During lockdown periods in 2020 we thought the sport would grind to a halt, for instance, but tales emerged of garden pole vault contests and virtual races galore. For this, I thank the athletes for their endless energy and ability to keep us entertained.

Then there is the brilliant team that has kept AW going over the years. From Jimmy and Mel – the latter of whom is still incredibly active as an athletics writer – through to the current staff, we have been blessed with a never-ending production line of skilful, passionate and hard-working writers and photographers, not to mention unsung heroes who often go beyond the call of duty designing pages, selling adverts or proof-reading close to deadline at 2am or beyond. 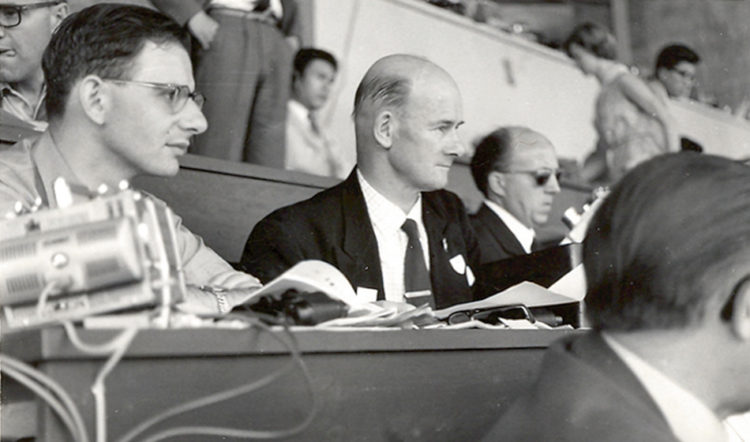 Athletics is a sport that never sleeps. In a normal pandemic-free year its competitions take place every weekend. In addition, it is a sport of many sports and its rich variety includes disciplines such as sprint hurdles and shot put, fell running and pole vault, race walking and javelin.

In the early years contributors such as James Armour-Milne in eastern Europe, Joe Galli in Australia and Roberto Quercetani in Italy filed news, results and rankings and helped AW develop its reputation for authoritative, comprehensive coverage. Harold Abrahams, the 1924 Olympic 100m champion of Chariots of Fire fame, contributed to the early issues too. Not everything was of a statistical nature, though. The magazine ran a popular gossip column called Roamer by an anonymous writer, while a number of great coaches such as Geoff Dyson wrote articles advising how athletes they could improve.

Cliff Temple, the much-admired journalist and coach, is one of many national newspaper athletics writers who have contributed to AW over the years. Stalwarts like Martin Duff and Alastair Aitken have been submitting grassroots reports and results to AW since before I was born. Similarly, the photographer Mark Shearman has an incredible history of contributing to AW – his first front cover image was in 1961 and he still takes pictures for us today.

Most of all, I have to credit AW’s readers for our ongoing survival. When I joined AW full-time in 1997 I was told that the magazine had more “loyal” readers than pretty much any publication in the sizeable stable that the owners at the time, Emap, possessed. If someone subscribed to AW, their figures suggested, there was a strong chance it would be the start of a long relationship with the magazine and, anecdotally, I have certainly found this to be true.

I’ve heard countless, magnificent stories of readers who started buying AW in the 1950s, or even the late 1940s. The magazine has become part of their lives and we have paid a small tribute to some of them in the December issue of AW’s new monthly magazine.

Perhaps the most incredible of all is athlete and reader Eric Shirley. His name first went in AW in February 1946 when winning the Middlesex youths’ cross-country title and he went on to compete in the 1956 and 1960 Olympics before appearing, phenomenally, in our pages in 2019. Now aged 91, it is only the pandemic that has prevented him competing in 2020 but he was an obvious candidate to feature in-depth in our 75th anniversary special issue magazine, out this month. 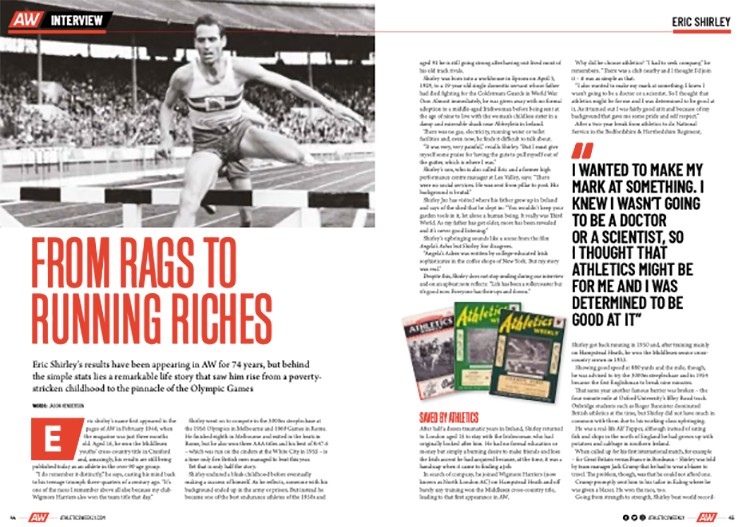 Shirley’s athletics career has unfolded in parallel with AW’s life so far. During this time the magazine has become something of a familiar friend to its readers. Many changes have taken place in athletics, but AW has remained a constant factor. It is a trusted companion whether you are spectating trackside at the Olympics or merely after something to read as you jump on your club mini-bus on the way to a grassroots competition on a Saturday morning.

The magazine has become part of the fabric of British athletics, with many simply referring to it as “the AW”. Athletes still relish seeing their photograph in the magazine – it is a badge of honour – with the front cover naturally the most coveted spot. The goodwill that this 75th anniversary will hopefully generate has been earned through our decades of coverage.

The familiarity of our brand aside, the magazine has never stood still either. Even during my relatively short time at the magazine I have seen the advent of the internet, growth of social media and staggering improvements in computer technology – and AW has taken it all in its stride. Less than 20 years ago results would be dictated to copy-takers or sent in via fax, for example, whereas today’s operation is dominated by emails and xls spreadsheets.

The ability to post an article with photographs or video interviews using a laptop or even a phone from the middle of a field at a cross-country event is something that would have been beyond the imagination of Jimmy or anyone else in 1945. Such coverage now reaches thousands of readers within seconds on social media too.

The internet is, of course, the main factor that cynics have cited when predicting our doom. What they fail to appreciate, though, is that AW is part of the internet anyway. Back in 2007 we were quick off the blocks to publish a digital edition of the magazine and since then our online operation has continued to grow with a virtually 24/7 service on social media – and with much more in our subscriber-only Clubhouse.

Traditionally, AW has covered international athletics with a British bias. Yet the magazine has always been well respected around the globe as well. Last year, for example, World Athletics awarded the magazine with an IAAF Heritage plaque with president Seb Coe, himself a long-time reader of course, making the proud presentation.

If all this sounds a little self-congratulatory, I make no apology. This is the magazine’s diamond anniversary and it is surely worth celebrating.

Publishing AW is definitely a marathon not a sprint and the magazine has stayed the course for 75 years and counting. To all the readers, athletes and colleagues who have kept the magazine going over the years, I salute you.