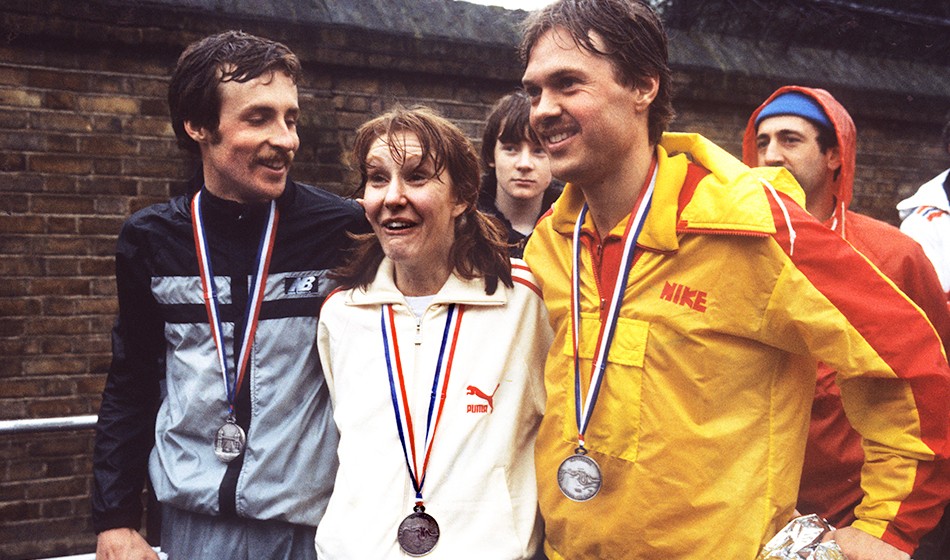 Steve Smythe, who has achieved a 40-year span of sub-three-hour marathons, would have been running his 39th London Marathon today. When news of the 40th edition’s postponement was confirmed, he sat down to reflect on his top 10 moments so far as a fan.

The inaugural London Marathon took place on March 29 with a few missing the start because the clocks went forward.

In near windless conditions and light drizzle, Norway’s Inge Simonsen and USA’s Dick Beardsley decided not to race it out and shared victory in 2:11:48.

Joyce Smith won the women’s race (held with the men) in a British record of 2:29:57, exactly nine minutes ahead of New Zealand’s Gillian Drake.

While nowadays the race is Kenyan dominated, back then it was Britain’s men who led the way and there was a fourth successive UK men’s victory as Welsh world record-holder Steve Jones won in 2:08:16, despite a brief toilet stop near the Tower of London.

It would remain a course record for a dozen years.

In second, the 1984 winner Charlie Spedding set an English record of 2:08:33 while Scot Allister Hutton was third in 2:09:16 to share the podium around the home nations.

The women ran with the men and Ingrid Kristiansen benefitted from the company to smash the world record with a groundbreaking 2:21:06.

The 1989 race was the best ever men’s field and also the best race yet as it was all decided on the finish on The Mall.

Tony Milovsorov was the leading Briton in sixth in 2:09:54.

There had not been an English victory since Charlie Spedding in 1984 and this proved to be the last ever men’s win. The Commonwealth 10,000m champion Eamonn Martin showed his great finishing speed on his debut marathon as he sprinted away from Mexican Isidro Rico on the finish on Westminster Bridge.

Poland’s Grzegorz Gajdus was third, 17 seconds back on the winner

Commonwealth champion Lisa Ondieki was second around 100m back, with a disappointed McColgan third in 2:29:37.

Gillian Adams, who had been third in the inaugural 1981 race, finished 10th and second Briton.

There were a record number of finishers as 24,448 made it to the finish line. 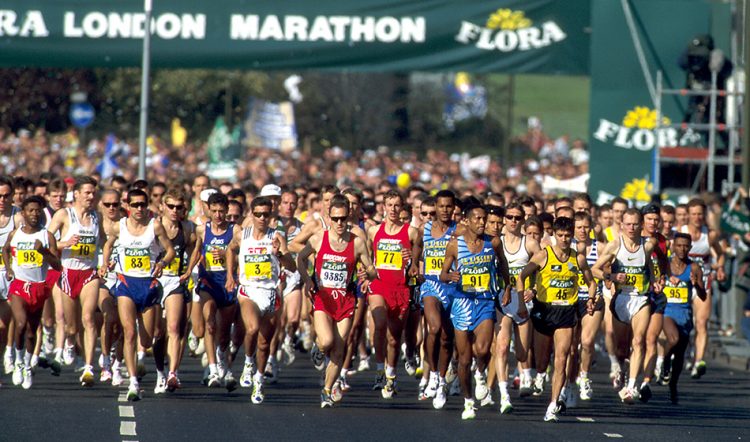 Pinto was back in sixth at 20 miles, some way off a leading pack which included Olympic champion Josiah Thugwane and Stefano Baldini, but it was the Portuguese Pinto who finished the strongest to win in 2:07:55, two seconds ahead of Baldini, with 13 seconds covering the top four.

Britain’s Richard Nerurkar was in the thick of the battle until the last few miles and finished fifth in 2:08:36 while Paul Evans was also inside 2:10 with 2:09:18 in eighth.

The previous year Liz McColgan had easily won the women’s race and was followed home by Joyce Chepchumba.

The position was reversed a year later though the Scot led into the finishing straight but could not quite hold off the Kenyan who won by a second in 2:26:51.

There was a record-breaking event as Khalid Khannouchi improved his world record to 2:05:38 and Paula Radcliffe set a women’s-only record of 2:18:56.

It was a classic race which came down to the Embankment as world record-holder Khannouchi surged away from two of the greatest track runners in history, Paul Tergat, the Olympic 10,000m silver medallist, and his conqueror from Sydney, Haile Gebrselassie.

The Moroccan-born American had to work hard to get away from Tergat, who finished 10 seconds back in 2:05:48 to go second all-time.

Gebrselassie, who was to later add the world record to his many track marks, suffered in the last few miles as he paid for avoiding sports drinks and relying just on water and he was third in 2:06:35, 17 seconds ahead of defending champion Abdelkader El Mouaziz.

Such was the quality, European champion and Olympic champion-to be Stefano Baldini was only sixth and previous course record-holder Antonio Pinto seventh, just ahead of leading Briton Mark Steinle (2:09:17).

Britain did even better in the women’s race as Radcliffe won by over three minutes.

The early pace was nothing special but Radcliffe broke clear at nine miles and was full of running and covered the 24th and 25 miles in 5:09 and 5:06. Only Catherine Ndereba had gone faster in a mixed race in Chicago, and then only nine seconds quicker.

In her second marathon Paula Radcliffe set a world record of 2:17:18 in Chicago, but that was nothing compared to what she did in London six months later.

With the aid of male pacemakers, she took almost two minutes off her record time with 2:15:25 in what many thought was the greatest female endurance run in history. 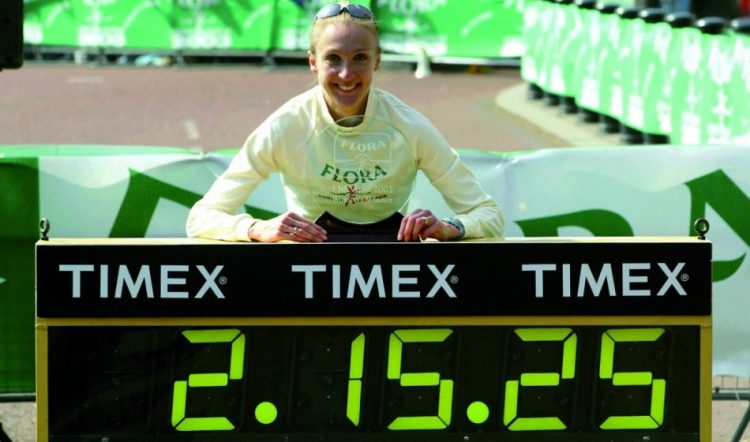 Despite the torrid pace, and suffering from stomach cramps, she actually sped up. She covered the second half in 67:23 and the last 10km well inside 32 minutes.

The former world record-holder and world champion Catherine Ndereba ran 2:19:55 but was an astonishing four and a half minutes behind.

Ndereba and third-placer Deena Drossin (2:21:16) would match these positions in the following year’s Olympics in which Radcliffe dropped out at 20 miles.

The world record would last for 16 years.

While the women’s event was barely a race, the men’s was a superb battle with seven seconds covering the top six as they all sprinted on to the finish on The Mall.

Gezahegne Abera, the reigning world and Olympic champion, won in 2:07:56, sharing the winning time with Stefano Baldini, a second up on Joseph Ngolepus.

Paul Tergat, who had been second the previous two years, was fourth this time but was closer to the winner as he was just four seconds back.

The Olympic champion Samuel Wanjiru eyed a world record and in perfect conditions, the pacemakers blasted through 5km in 14:06 which is inside two hour pace for the full distance.

The half way time of 61:35 was the fastest in marathon history.

The pace slowed a little until Hendrick Ramaala kicked in a 4:37 19th mile.

Wanjiru took the pace on himself in the 20th mile and a 4:40 and 4:46 mile got him clear but he was chased hard all the way by Tsegaye Kebede and often the gap was just a few seconds.

The Olympic champion, who was to tragically die very young two years later at the age of 24 in a fall from his balcony, won by 10 seconds in a course record of 2:05:10, 10 seconds ahead of Kebede.

The women’s race was not of the same quality and Germany’s Irina Mikitenko retained her title in 2:22:11 as Mara Yamauchi set a two-minute PB of 2:23:12 in second.

Eliud Kipchoge retained his title and finished just eight seconds outside the world record despite cold and windy conditions but did set a course record of 2:03:05. 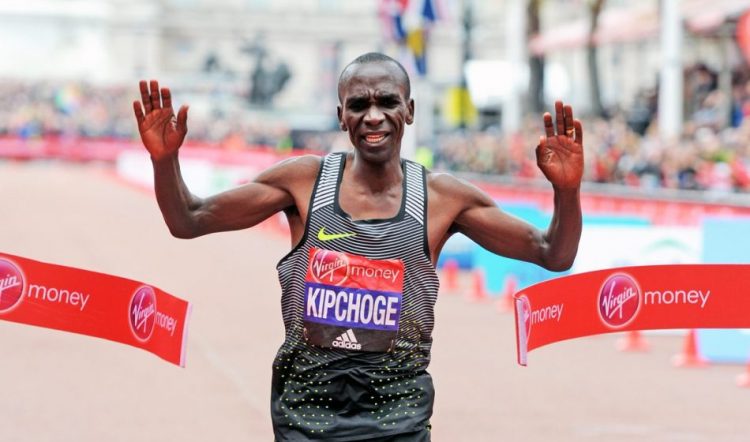 The early pace was fast with eight going through half way in a best on record 61:24 and Kipchoge and Stanley Biwott set a 30km world record of 1:27:13.

Callum Hawkins was the leading Briton in eighth in 2:10:52 to seal his selection for Rio, where he went on to be a superb ninth.

The women’s race was even more dramatic as Jemima Sumgong survived a fall at 22 miles and then narrowly held off the challenge of defending champion Tigist Tufa to win by five seconds in 2:22:58.

Alyson Dixon was the leading Briton in 13th in 2:31:52 which sealed her Olympic place.

The race was billed as a battle between world record-holder Eliud Kipchoge and European record-holder and multiple Olympic track champion Mo Farah.

It proved a no contest as the brilliant Kenyan won the men’s race for a record fourth time and despite blustery conditions, improved the course record to 2:02:37 in running the second fastest time in history.

Farah dropped off the pace after half way was reached in 61:37 and though he found the second half hard, battled on finish fifth in 2:05:39, three minutes down on the winner and just outside his European record time from winning in Chicago.

The women’s race began at a modest pace and half way was reached in a modest 71:38.

However, there was nothing modest about the second half as Brigid Kosgei blasted an unprecedented 66:42 second half to run 2:18:20 and take almost two minutes out of defending champion Vivian Cheruiyot (2:20:14) in the last 10km.

Kosgei would go on to smash Radcliffe’s 2003 world record in Chicago.