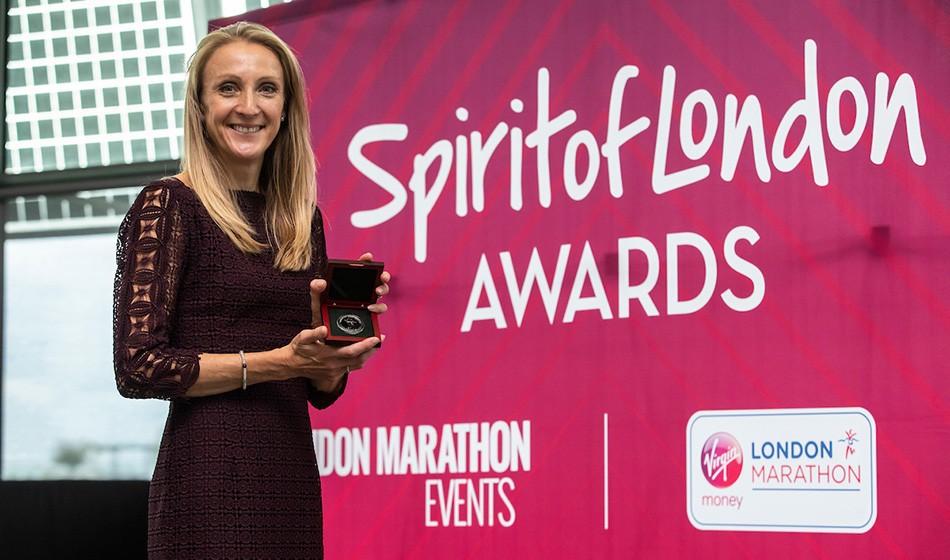 Paula Radcliffe and David Weir were among the 25 champions, runners, volunteers and supporters to receive recognition from the Virgin Money London Marathon on Thursday as they collected their Spirit of London awards at London’s City Hall.

The Spirit of London campaign was launched to celebrate the unique spirit of the 26.2-mile event and the many extraordinary stories of those who have been involved since its first edition in 1981.

“I think it’s very special and it’s also very humbling,” Radcliffe said of being named among the award winners. “You get the chance to discover some truly inspirational stories and people here. I think it just brings home how special the marathon is and how special the London Marathon is. That spirit covers all aspects of it.

“It’s a cliché but there really are all walks of life in the marathon and everybody makes that long journey – not just the 26-mile journey but the journey from deciding you’re going to do it, through what you learn in the training and how much of a stronger person you become, to arrive at that finish line truly a better person and a stronger person.”

The Spirit of London theme was inspired by the moment in the 2017 race when Swansea Harriers runner Matthew Rees stopped on The Mall to help an exhausted David Wyeth to finish. It was captured on BBC TV cameras and the footage went viral.

Ahead of this year’s event, Rees and Wyeth were announced as the first two winners of the Spirit of London award.

Paula Radcliffe MBE
Radcliffe created history on the streets of London in 2003 when she set a world record of 2 hours, 15 minutes and 25 seconds – a mark that has remained untouchable to this day.

She won the London Marathon on three occasions – in 2002,2003 and 2005 – as well as the New York City Marathon four times, the Chicago Marathon once and the World Championships marathon once.

David Weir CBE
Weir is the most successful athlete in London Marathon history and in 2018 won his eighth elite men’s wheelchair race.

He started his career competing in the Mini Marathon and as well as his victories in London, he has won six Paralympic gold medals. Along with his coach Jenny Archer, Weir runs the Weir Archer Academy with the goal to increase participation and nurture the next generation of Paralympians. 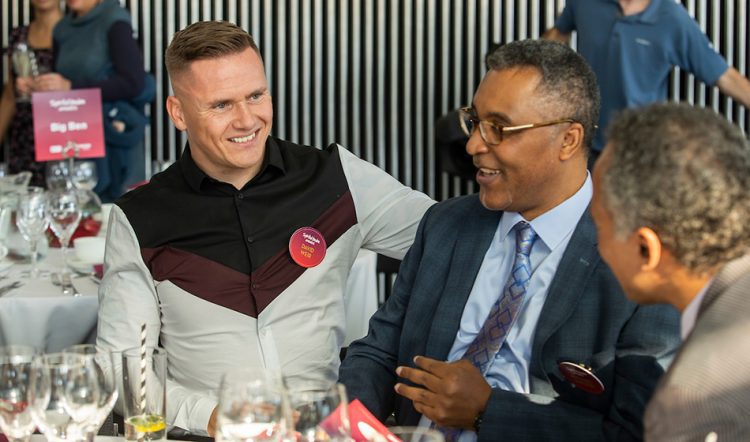 Tanni Grey-Thompson DBE
The winner of six London Marathon titles between 1992 and 2002 and one of the most successful para athletes in British history, Grey-Thompson also won 11 Paralympic gold medals and held more than 30 world records during her career.

Dick Beardsley and Inge Simonsen
The joint winners of the first London Marathon in 1981 famously crossed the line hand in hand after neither could break the other over 26.2 miles.

American Beardsley and Norwegian Simonsen showed the spirit of marathon running and forged a friendship that lasts to this day.

Joyce Smith MBE
The British Olympian and former 3000m world record-holder won the inaugural London Marathon in 1981 in 2:29:57 at the age of 43. Read more here.

Kathrine Switzer
One of the great trailblazers in the push for gender equality in sport, Switzer famously challenged the all-male bastion of distance running by becoming the first woman to enter, officially race and complete the Boston Marathon in 1967. She ran wearing the number 261 and that has since become a symbol of women’s equality and her own fundraising organisation, 261 Fearless.

In 2018, on the 100th anniversary of women’s suffrage in the UK, Switzer completed the Virgin Money London Marathon for the first time, aged 71, wearing her famous 261 number. Read more here.

Matthew Rees and David Wyeth
The moving footage of Rees stopping on The Mall to help Wyeth finish the 2017 Virgin Money London Marathon went viral and touched millions round the world.

Wyeth has since worked with medical experts to find out what went so wrong after his meticulous preparations and he has made that research available to all runners.

Michael Watson MBE
In September 1991, Watson received life-threatening head injuries during a world title fight with Chris Eubank – a contest that is now one of the most famous in British boxing history.

He was in a coma for 40 days and spent six years in a wheelchair but in April 2003 he completed the London Marathon, walking the route in six days and raising money for the Brain & Spine Foundation charity.

Steve Chalke MBE
The record for most money raised for charity at the London Marathon – indeed at any marathon worldwide – is held by Reverend Steve Chalke MBE.

The Londoner raised a jaw-dropping £2,330,159.38 for the Oasis Charitable Trust when he completed the 2011 race. The Trust was created by Rev Chalke to set up housing, healthcare and educational projects with the aim of reducing poverty worldwide and now operates in 11 countries over four continents.

Charlie Dark
DJ and poet Dark formed Run Dem Crew (RDC) in London in 2007 as an alternative to more traditional running clubs. RDC is committed to change and works closely with young people across London, providing mentoring and advice along with the opportunity to explore London in a safe, unique, positive and supportive environment.

Jill Tyrell
On July 7, 2005, Tyrell was in the same carriage as a suicide bomber who blew up an underground train travelling between King’s Cross and Russell Square. Twenty-six people died on that train and a total of 52 people died on the same day of co-ordinated terror attacks on London which became known as 7/7.

Tyrell spent two-and-a-half months in hospital following the attack and had to have eight operations but the keen marathon runner recovered from her injuries well enough to take part in the 2006 London Marathon, just 290 days after the attack.

Fauja Singh BEM
Singh is the oldest person to have ever finished the London Marathon. He was 93 years old when he completed the 2004 race.

Now aged 107, he is still running marathons (his last one was in 2016) and he was awarded the British Empire Medal in the 2015 New Year Honours for services to sport and charity.

"Every single person gets to that finish line a stronger and better person."@paulajradcliffe was one of those honoured with a #SpiritOfLondon award today…❤️#LondonMarathon pic.twitter.com/w5WEcsHuyy

Claude Umuhire
After surviving the Rwandan genocide as a child, Umuhire came to London with his mother. Years later, after finding himself homeless on the streets of the capital, he was introduced to running by The Running Charity. This helped transform his life and in 2015 he ran the London Marathon to raise money for the charity.

Chris Moon MBE
Moon knows exactly what it takes to overcome adversity. In 1995, he was blown up in Africa while clearing landmines for a charity and lost his lower arm and leg.

He survived initially because he treated himself. About 14 hours after the injury he arrived in South Africa where doctors said they’d never seen anyone live with such a small amount of blood. But he was out of hospital in less than two months and within a year ran the London Marathon, raising significant sums to help disabled people in the developing world, worked to ban landmines. He has since gone on to run 14 London Marathons, raising thousands of pounds for charity.

Claire Lomas MBE
Lomas was the first person in London Marathon history to complete the route in a bionic suit. She was paralysed after an accident riding a horse in 2007 and walked the London Marathon route in 2012, taking 16 days to cover the 26.2 miles.

Lomas raised £210,000 for spinal injury research by completing the London Marathon and has since gone on to raise more than £600,000 for charity through other fundraising challenges, including taking on the Simplyhealth Great North Run.

Rhian Burke
Burke was part of the Mind Over Marathon team who completed the 2017 London Marathon for Heads Together to raise awareness of mental health. She was diagnosed with post-traumatic stress disorder following a double tragedy in 2012 when her one-year-old son George died from pneumonia and then her husband, overwhelmed by grief, committed suicide a few days later. She has set up the charity 2 Wish Upon a Star to help other bereaved families.

Roy Webber
71-year-old Roy has volunteered at every London Marathon since the very first event in 1981 through his involvement with the 23rd Camberwell Scouts.

Charlie Guenigault
Met police officer Guenigault was off duty and enjoying a night out with friends when terrorists struck on London Bridge on June 3, 2017. He spotted two police officers being attacked and in trying to stop the terrorists, Guenigault was stabbed five times and rushed to King’s College Hospital in a critical condition. He ran the 2018 Virgin Money London Marathon just eight months after the attack, raising money for the hospital that saved his life.

Zamzam Farah
Farah ran the 400m at the 2012 London Olympics for Somalia to show her country that women could compete in sport. Despite her bravery getting worldwide acclaim, it was not received well in her home country and she had to flee to the UK to seek asylum. When she arrived in the UK she found herself still struggling to be accepted by her community and could not find somewhere to live before she was helped by the Running Charity. She completed the 2017 Virgin Money London Marathon to raise money for the charity.

Stephen’s Team
Ten runners representing the Stephen Lawrence Charitable Trust took part in the 2018 Virgin Money London Marathon, 25 years to the day after Stephen was murdered in a racially motivated attack. The runners raised money for the Trust which gives young people the opportunity and support to flourish in a society that treats them with fairness and respect.

Two teams of North Kensington and Paddington Red Watch firefighters
Eighteen firefighters who were among the first to arrive on the scene of the Grenfell Tower fire in 2017 ran the 2018 Virgin Money London Marathon to raise money for those directly affected by the fire. Members from Red Watch at North Kensington Fire Station and Red Watch at Paddington Fire Station completed the marathon side-by-side with the Paddington crew running in full breathing apparatus.