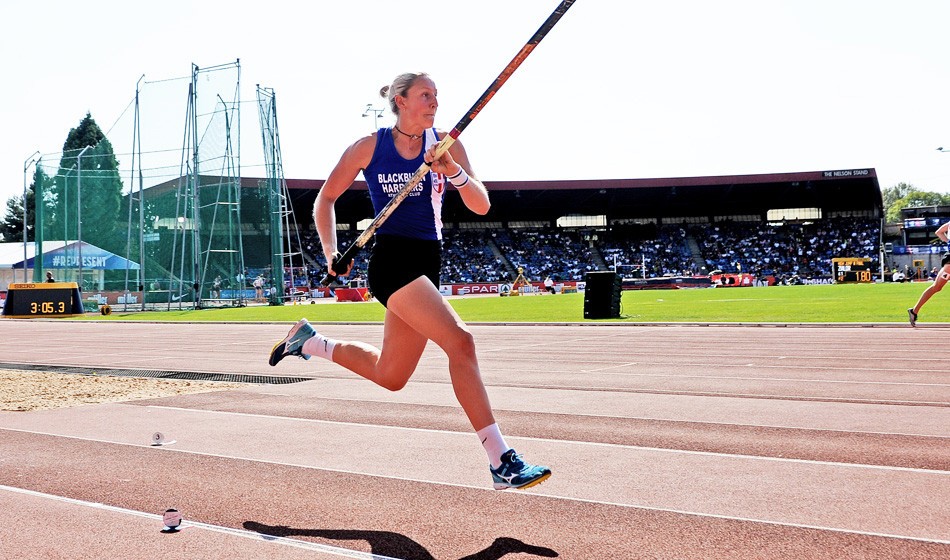 During my time in the sport, I have seen and become aware of more and more issues needing to be tackled, so I was really passionate about getting involved with the Athletes’ Commission at UK Athletics.

Getting involved helps to promote change and one of the biggest things we are looking to address is that, in general athletics terms, it feels like field events get a bit of a raw deal.

Now I don’t want to sound bitter and I’m not bashing the track athletes at all, it’s just that the way athletics is shown and the issues with TV coverage creates a massive void, which is a big concern.

That lack of exposure reduces sponsorship opportunities for the athletes, while it also leads to reduced participation as kids will see the sprinters and track athletes on TV for long stretches whereas they might catch me jumping for a 10-second period. How is that going to attract them to field events?

With that in mind, within the Commission we’ve set up a group which is trying push forward and raise the awareness of the field disciplines. I have done presentations to those in charge at UKA where I have shown the German street meets and what the Manchester CityGames used to be like – just showing how the field events can be presented – and they have listened so I am hopeful that, over the next five or 10 years, field events will come into the limelight and get a little more love.

"I'm a big ambassador for my sport and I love it. I want to get it out to as many people as possible so Britain can be a powerhouse!"@HollyBradshawPV on the benefits of pole vault street meets.

How do we try to change minds? It has got to come from three different angles.

Firstly, you have got to tell the story in terms of the TV coverage a little more. The pole vault competition in the Lausanne Diamond League last year – a dedicated, standalone event where Mondo Duplantis and Sam Kendricks both jumped six metres – was a perfect example of what can be done. I had people messaging me afterwards to say how exciting it was.

I think TV companies need to find a way to show the full shot put competition, the full long jump competition or whatever it might be to really tell the story.

Secondly, some investment into coaching for field events is needed in the UK. When you compare the number of field event coaches employed compared to track it is very different and I believe field events actually need more coaches than track, just because each event is so technical, so different and so specific.

With the exception of Tore Gustafsson, who is not based in the UK, we don’t have a single throws coach employed in this country so how are we going to get more kids and more people involved in field events when we don’t have the coaches?

Having someone to promote each field event would make a big difference.

Then the other barrier we face is that European and World Athletics are capping the number of people that compete at major championships.

Say, for the 60m at the world indoors, there are heats, semi-finals and finals – just think how many athletes that allows to go to a major championships? In the field events, however, there are straight finals so you’ve got 12 athletes in the women’s pole vault final, as opposed to 30 or 40 on the track.

We have an issue with development, too. One of the biggest strengths athletics has over any other sport is its inclusivity, but I see it down at my club Blackburn Harriers – where there is more of an endurance culture – that you might have 10 kids down there who are different shapes and sizes but they are all doing the same session of just laps around the track.

If you were to line me, Morgan Lake, Jazmin Sawyers, Sophie McKinna and Sophie Hitchon up alongside each other – we do five different events and we all look and are so different but kids aren’t necessarily getting to see these differences because they are not being shown these field events.

There’s definitely a collective feeling that more of a push is needed now. I understand, of course, that you need equipment and some clubs can’t afford poles, to re-lay a shot put circle or build a hammer cage. It’s just one of the challenges we face, but I do feel there’s a growing frustration out there.

The recent performances of the world’s top field athletes are helping, though. The male and female world athletes of the year for 2020 were both jumpers, with Mondo in the pole vault and Yulimar Rojas in the triple jump.

I have recently had a conversation with UKA CEO Jo Coates where she asked if we might be able to push the pole vault in the UK off the back of performances of people like Mondo. I was delighted she said that and I really do feel that the top athletes are enlightening others.

With the Athletes’ Commission, we are also now in a better place to make change. I believe that it has given athletes a platform where we can formalise our concerns and we are taken seriously.

Get in touch with us, however small you think your concern might be. You might think a certain issue is only affecting you but you might find there could be another 100 athletes experiencing the same thing.

We’re here to support and to be the voice of all athletes.

WHAT IS THE ATHLETES’ COMMISSION?

Formed in 2017, The Athletes’ Commission is a group of 12 former and current British international athletes who work together to represent athletes’ views and voices to the British Athletics Performance Team and the UK Athletics Board with the aim of ensuring the athlete perspective is heard and understood by the decision makers in our sport.

WHO IS IT FOR?

While the Athletes’ Commission is immediately to serve athletes who have competed for Great Britain over the past six years, they know that coaches, assistants or staff may wish to highlight issues on behalf of their athletes.

HOW DO I GET IN TOUCH? WHERE DO I GO IF I HAVE A QUESTION OR A CONCERN?

There are a number of ways to get in touch with the Athletes’ Commission on any issue in the sport you think worth raising.

» You can also air your concerns via the AW social media channels or by emailing [email protected]
Your message will be relayed to the Commission and answers could appear in the pages of AW as the magazine will be publishing regular columns with Athletes’ Commission members in the coming months.