Racing, not records, key for Farah in New York 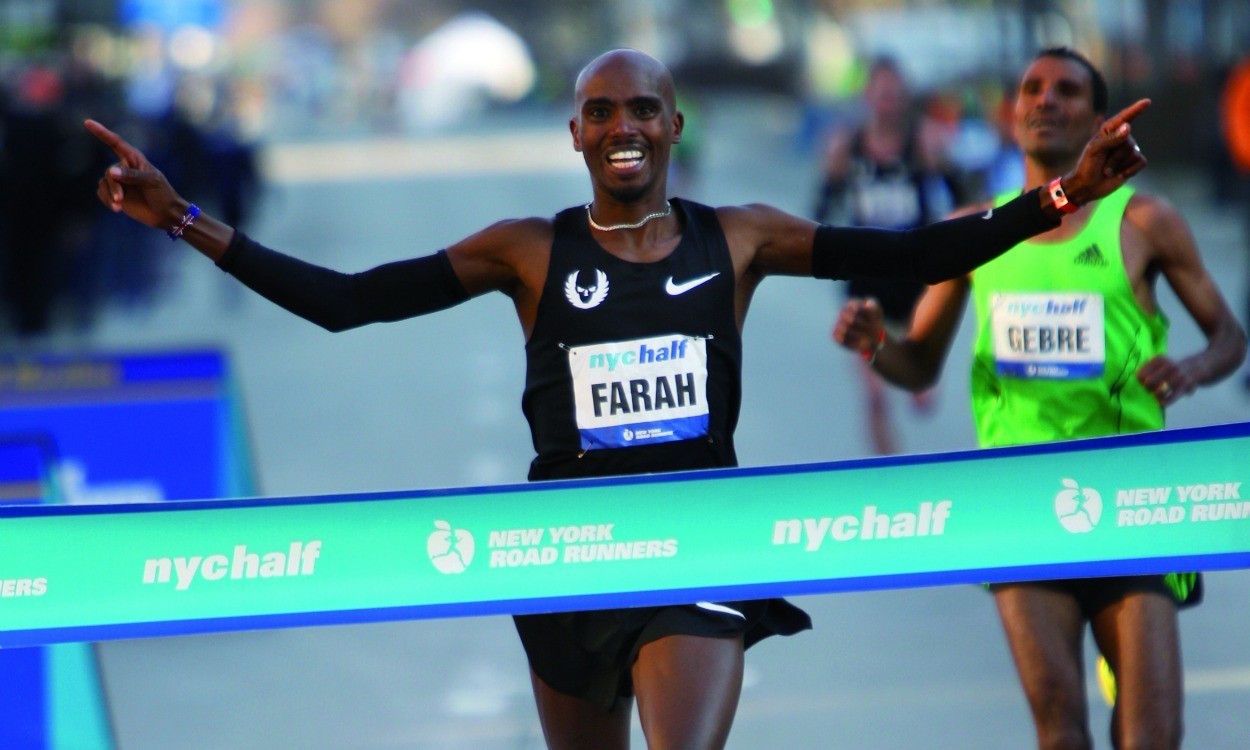 Although he believes he is capable of being the first Brit to run a half marathon in under 60 minutes, Mo Farah says his next outing on the roads is all about making sure he’s ready for his marathon debut next month.

Despite insisting he’s not going to New York looking to break his own national half marathon record, the double world and Olympic track champion does want to win and with the field comprising the likes of Geoffrey Mutai of Kenya who has a 13.1 miles best of 58:58 and has broken the one-hour mark six times, it could well take a British or even European record to claim victory.

Farah is running Sunday’s NYC Half as he builds up to making his debut over 26.2 miles at the Virgin Money London Marathon on April 13 and says that rather than fast times it’s race practice he’s looking for.

“I’m not really thinking about time. This is a matter of testing myself to see where I am,” insisted Farah, who clocked the quickest ever time by a Brit when winning the same race in 60:23 in 2011 but it couldn’t be recorded as a UK record due to the downhill nature of the course. For 2014 the course has been changed and is record-eligible. Farah’s PB of 60:10, set on his last competitive outing at the Bupa Great North Run last September, is also not eligible for record purposes, so his 60:59 from New Orleans in 2013 is considered the national record. The European mark of 59:52 was set by Spaniard Fabian Roncero at Berlin in 2001.

“Mainly it’s about running the race, feeling good and feeding back to the coach how I felt,” added the 30-year-old. “It’s more a case of trying to do well in the race rather than focus on the time. If it comes with a fast time then that’s a bonus but I’m not really thinking about any time, I just want to be able to do well in the race.”

Having spent the last few months training at altitude in Kenya, Farah’s main concern is making sure what he has been working on in Iten translates successfully to a competitive environment.

“It’s good to test yourself where you have a good field and have good guys to run against,” said Farah, who as well as Mutai is set to face the likes of US 2004 Olympic marathon silver medallist Meb Keflezighi, Kenya’s 2012 Boston Marathon winner Wesley Korir and his fellow Kenyan and 60:41 half-marathon man Stephen Sambu.

On the confidence boost winning in New York could give him ahead of London, where he will again face Mutai as well as current marathon world record holder Wilson Kipsang, reigning London Marathon champion Tsegaye Kebede and the world and Olympic marathon champion Stephen Kiprotich, Farah added: “It would be good, but at the same time it’s only half way.

“I will go out there and do what I can. As a champion you never want to lose a race, you’ll do anything.”

And although he’s not setting his sights on breaking records or dipping under the 60 minute barrier this weekend, that’s not to say he doesn’t think he can.

“I should be able to do that, at my level,” he said on running sub-60 minutes. “At the same time, I don’t know if this race is the race where you want to go out there and think about time. It’s all about feeling great and ready for London.”

Farah also revealed that part of his preparation for London in Kenya has been practising the collection of his water bottles.

“My coach has been taking the car and putting the bottle on the wing mirror then I’ve got to practise picking it up,” he explains. “He’ll drive on a long run and then put the bottle on the side mirror of the car, while I’m running I try and pick it up.

“There have been a few times I’ve missed it but other times I’ve picked it up alright. I’ve come quite a long way since doing the half in London last time,” he added, with Farah having run half the London course in 2013 as a taster.

With New York and the London Marathon Farah’s immediate targets, he is set to return to the track in the summer when he will compete at the Glasgow Diamond League, but he said it would depend on how London goes as to how his year might pan out from there.

“My aim is to do the NYC Half and then London and then after London, I don’t want to just jump in on the track and say I’m running the Commonwealth Games and Europeans,” said Farah. “It’s one race where I want to test myself. If everything’s good then we’ll make another decision.

“I’ve won medals on the track, why not test myself?” he added of his decision to step up in distance. “If I’m good at it, I’ll maybe give it a couple more times, but if not I’ll come back to the track. It depends on how London goes.”

As well as becoming record eligible, the new NYC Half course has been able to accommodate an increase in field size of up to 20,000, while there will also be an elite wheelchair race for the first time. The half marathon will be televised globally and will be shown live in the UK on the BBC Red Button from 11.30am GMT.