Persistence pays off for Tish Jones 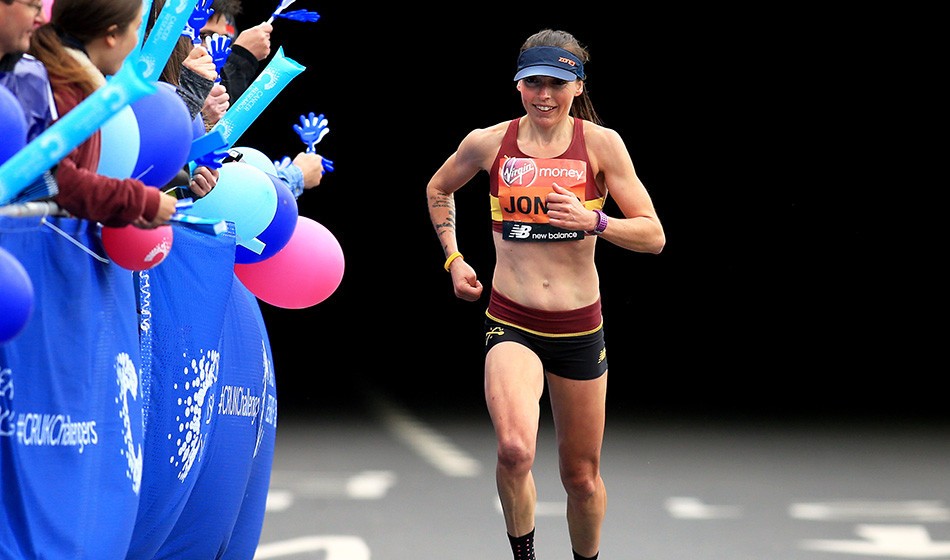 Tish Jones ran a big marathon PB in London and qualified for the IAAF World Championships in Doha despite an injury-hit build-up that saw her unable to run during January.

The 33-year-old Belgrave Harrier threw herself into cross training and never lost hope before building back into running in the spring and then nailing a 2:31:00 time on April 28.

“I poured everything into the last eight weeks,” she said, after recovering from a tibia-related problem. “Whether I was on the bike, gym, elliptical or in the pool, London was the goal. Myself and my coach Nick (Anderson) managed to get my long runs back in there and so to get the time made me so happy and my face at the end was one of pure joy.

“I was in a pain cave for quite some time and I could see my pace dropping off and I didn’t know if I was going to finish but everyone goes through bad patches in a race and I was so determined to run through it and was desperate to finish the race and then I was so happy and amazed to get a PB.”

Currently based in Cape Town, South Africa, Jones believes mountain biking has contributed to her endurance.

“For the last three years I’ve been doing about 70% of my training on the bike and up to 400km a week on the bike, which is sometimes more than triathletes do, but it’s partly due to where I live,” she says.

“I’m not that motivated to ride in the UK but here I just want to ride the whole time. I’m passionate about cycling in general and it plays a massive role in my training.

“I’ve always had a thing about Africa. I’ve done some volunteer projects here and every time I came to South Africa I felt a big connection. When I first went to Cape Town I fell in love with it and when I got home I thought ‘screw it, I’m going back’ and then I made a home for myself here.”

She is also gambling on being a full-time athlete at the moment despite not being sponsored. “Sometimes you’ve got to take a leap of faith,” she says.

Jones – whose full name is Letitia – was not a runner at school. “My main activity when I was younger was horse riding and I did that quite a lot for a good 10 years,” she remembers.

“I had a pony and it’s every kid’s dream but it was also hard work and not that glamorous, although I enjoyed it. I also went basketball mad for a while but now running means everything to me – I can do it to feel happy, to escape, to get fit, to feel strong.”

Initially she took part in obstacle course races and when she received her first invitation to race 10,000m on the track she didn’t know how many laps were involved.

But as a runner she won the Cape Town Marathon in 2016 and in London last year clocked 2:33:56 before improving this year.

Jones has a tradition of having a tattoo on her arm in the native language of places she has visited. “I’ve got plenty more to add,” she says. “I’ve been to Doha before but only in the airport! So I don’t have any Arabic on my arm yet but I think it would look really nice.”

Getting a good training build-up is foremost in her mind, though. “I don’t want to be that inconsistent, flakey person who is always injured. I want to be robust, consistent and strong,” she says.