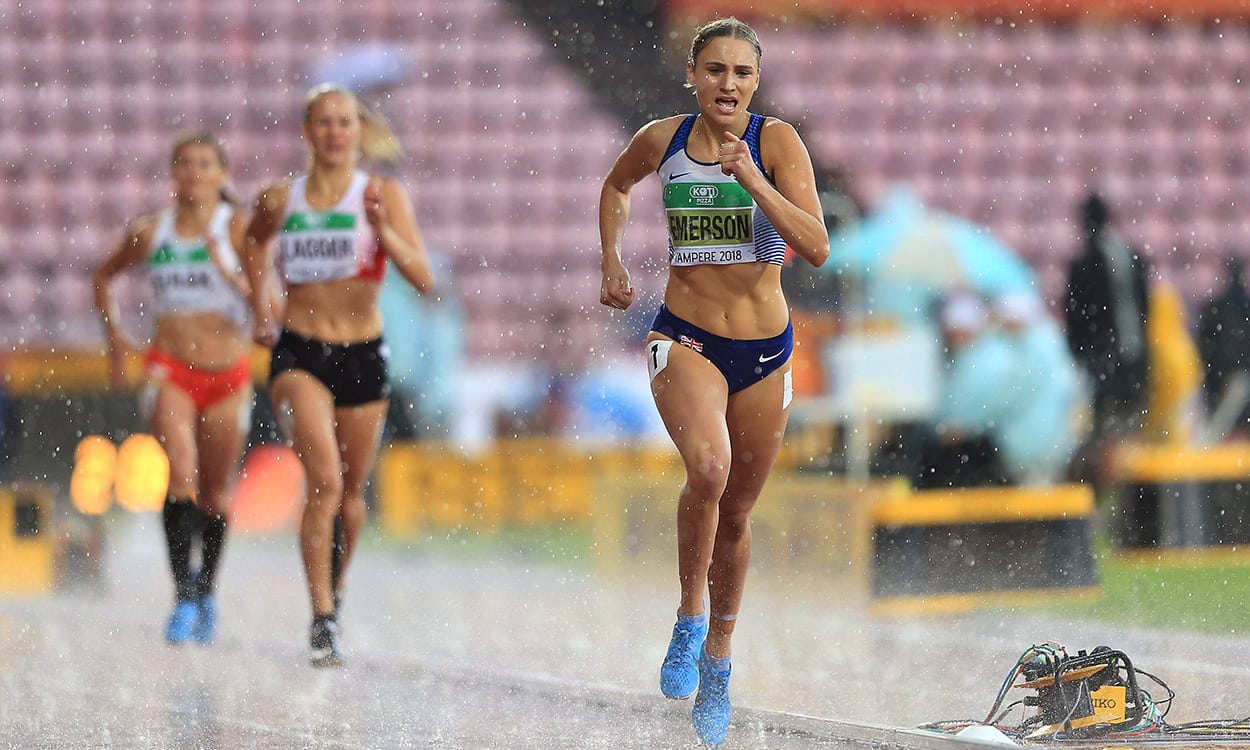 She may be my housemate, my training partner and one of my best friends, but pinning Niamh Emerson down for an interview is no mean feat, writes Ashleigh Spiliopoulou.

She’s constantly on the go and always full of energy. One of the most supportive and bubbly athletes you’ll ever meet, she’s always ready to give others advice and, for her age, she’s got a lot of advice to give.

That’s because Emerson has been through her fair share of major competitions, tough training, incredible victories and devastating injuries. At the time of our interview, for example, she is in week 22 of rehab after a patella tendon repair operation.

Our conversation starts with Emerson recalling her heptathlon victory at the IAAF World Under-20 Championships in Tampere last year. She explains how beforehand she so desperately wanted a medal but due to being ranked third going into the competition, she had barely dared to dream of gold. Yet Emerson’s dramatic finish to the 800m, where she collapsed across the line, completely spent, is just one example of the way she gives her heart and soul to athletics.

This incredible moment was just the fuel the new world junior champion needed to kickstart her into a hard winter of training. She describes how she found herself progressing unexpectedly quickly during the winter of 2018-19 due to the addition of new drills.

These drills were partly possible because the Jean Pickering Olympic Scholarship had allowed her coach, David Feeney, to visit the Dutch national training camp where he had discovered new ideas and gained inspiration for his athlete’s training.

Starting working with Goldie Sayers for javelin was also an initiative aided by the scholarship and this has made a big difference to Emerson’s understanding of the event.

After a promising winter, the 2018 Commonwealth Games bronze medallist went into the European Indoor Championships in Glasgow feeling excited. Nevertheless, she remembers feeling “a bit star-struck because it was my first time competing against the current best girls in the world!”

Yet really, she had nothing to feel star-struck about, because at just 19 years old she won an incredible silver medal, beating everyone apart from Katarina Johnson-Thompson.

While her impressive record of performances could suggest that little goes wrong for this heptathlon rising star, she has actually been plagued by more than her fair share of setbacks. For many years now, Emerson has been managing patella tendonitis which has limited the amount of jumping she can do in training. As if this wasn’t enough, prior to the outdoor season, she discovered she had a stress response in her back.

Although it was minor, the injury meant that she could not do any gym exercises that put load through her back and she had to swap running on the track for aqua-jogging and watt-bike sessions.

Her hampered lead up to the outdoor season put doubt into the minds of the coaching team as to whether she should accept her invitation to the big early-season combined events meeting in Gotzis in Austria. However, Emerson explains: “I was desperate to compete at this magical place that I had watched on live stream for so many years, especially as I had declined my invitation the year before.”

Outside of a major championship, competing at Gotzis is every multi-eventer’s dream so Emerson’s desire to compete was completely understandable. The competition started strongly, with a hurdles time very close to her PB. Unfortunately, though, the high jump was up next and it was this event that would test her knee the most.

At her second attempt at 1.86m, she planted her foot badly and felt excruciating pain that forced her to withdraw from the competition. Initially, she had no idea of the extent of the damage done, as she had been used to very painful episodes of patella tendonitis over the years. On her return home, MRI results showed a partial tear of the patella tendon.

There was no option but to operate. Within a week of the competition, she was lying in a hospital bed with screws holding her tendon together and the whirlwind finally caught up with her. She couldn’t believe it.

so it turns out i partially tore my patella tendon (🥺) le cry sad that my 2019 season isn’t a thing anymore 😭😭 but some things just don’t work out because something greater is waiting ✨⚡️ see you on the track in 2020 🤑🤑 p.s. the pics are in black and white because i’m dramatic hahah n looks cool

Ever the optimist, the Loughborough-based psychology student kept herself busy by studying for her exams and then turned her attention toward a much-needed holiday. It wasn’t long though before she was back into the thick of training, beginning with a one-week residential rehabilitation camp. There she trained in the gym and in the pool intensively, 9am-4pm every day.

Although the rehab has been tough, Emerson has thrown herself into it with complete commitment as she always does and she explains how rewarding it has been seeing the progress. Her sights are already set on next year, where she plans to be back into full training by January 1 in order to attempt her Olympic qualifying competition five months later.

Her gratitude to the Jean Pickering Olympic Scholarship for allowing her and her coaches to learn and grow, for funding training camps and for giving her advice and support, is reiterated again and again throughout our interview.

You cannot fail to get behind her in all her efforts due to an infectious personality and work ethic. Watch this space, because who knows what kind of performances she is capable of in 2020 and beyond.