Marc Scott has “no fear” taking on Mo Farah 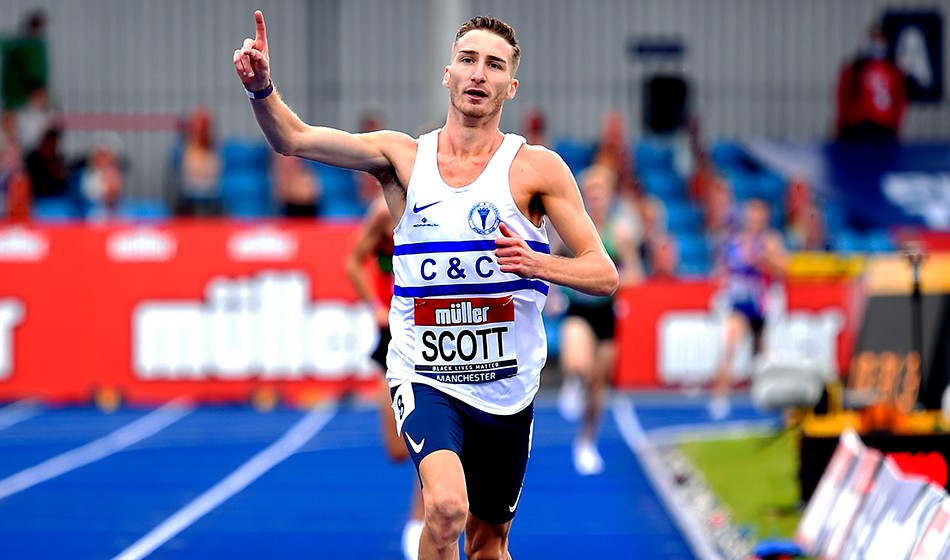 “I’m going to do everything I can to beat him,” says Yorkshireman ahead of Müller British 10,000m Championships and European Cup clash in Birmingham

The appearance of Sir Mo Farah might be attracting the bulk of the pre-race attention but Marc Scott insists that he can be the one making the headlines instead at the European Cup and British 10,000m Olympic trials in Birmingham on Saturday (June 5).

With each performance has come a growth in confidence and the Yorkshireman believes he is capable of beating the man who is going in pursuit of what would be an historic fifth Olympic gold medal.

Farah is now 38 and has not raced over 10,000m since winning the world title in 2017. His rival will be primed to exploit any potential weaknesses in a contest where a top-two finish (Scott has already run within the required qualifying standard of 27:28:00) will secure his place for Tokyo.

The pacemakers have been instructed to go out at 27:20.00 but Scott insists he will be ready for anything. The Oregon-based athlete certainly isn’t about to be intimidated.

“We don’t really know what to expect from Mo Farah,” he says. “When his name is thrown around, everyone just assumes ‘the great’ and what he has been so this weekend really will show the true colours of what he can do at his age.

“I have separated from what he has done in the past and I think it’s ‘what can he do now at his age versus us up and coming, young guys?’.

“I’m not going into it with this fear factor, I’m going to do everything I can to beat him and whatever strengths I have then I’ll use them to the best of my ability. He is obviously the favourite going into the race and it’s funny, because that wouldn’t usually be the case given the times I’ve run this season.

“He’s still the favourite and that takes a little bit of weight off my shoulders, but I don’t think there’s going to be the big aura about him that maybe [there] once was in the past.”

Simple things helping Sir Mo Farah get back on track

Everything you need to know about Müller British 10,000m Champs and European Cup

Farah and Scott last faced each other at the Antrim Coast Half Marathon in September, when the pair did battle for much of the race before the 10-time global gold medallist – who had broken the one hour track world record just a few days previously – kicked away in the closing stages to win by 12 seconds in 60:27.

Scott was making his debut over 13.1 miles that day and his run of 60:39 in finishing second immediately moved him to No.3 on the UK all-time rankings.

“I think it [beating Farah in Birmingham] would make some major headlines going into an Olympic year,” adds the Nike Bowerman Track Club athlete. “It would be a big feather in the cap. I came close last year, when we raced over the half marathon, but I just hadn’t quite done anything specific enough for that discipline. But this, hopefully, will be a turning point.

“I know what I’ve been doing in training, the races I’ve been doing and what I can do moving forward. Not to take anything away from him [Farah] and what he’s done in the past, but I think if there’s a time for someone to beat him then it’s going to be pretty soon.”

Should Scott, who is aiming to tackle an Olympic 5000m and 10,000m double this season, be victorious he is very much aware that it would raise his profile considerably. Being based in the US, in a training group which contains Olympic 1500m champion Matthew Centrowitz, wider attention – and credit – has not always been easy to come by.

“It’s one thing I have been trying to work on a little bit more recently,” says the former Leeds United Academy player, whose footballing career was cut short by a toe injury at the age of 16. “It’s just trying to get my name out there and build this profile as a GB runner, not a US runner. It’s been difficult just when I’ve been based in the US for nearly nine years now [Scott studied at the University of Tulsa]. If I can do that [beat Farah], maybe people will start recognising and maybe knowing who I am a little bit more.”

Farah and Scott will form part of a British European Cup side which also includes Matt Leach, Jake Smith, Emile Cairess and Kristian Jones. The team element to proceedings, however, looks likely to take a back seat.

“It seems to be every man for themselves,” says Scott. “As much as we are part of British Athletics together competing against other European countries it’s just different because there’s an individual battle going on at the same time which seems more important than the actual team event itself.”

Scott will simply be looking to carry on the rich vein of form he has been able to mine over the past year or so.

“One race after the other, I just didn’t feel like I could be beaten and it was just a great feeling to have, coming away winning races, running fast times and getting a bit of recognition after a few years of injury struggles and not quite performing how I’d like to,” he says.

“The confidence is really growing and I want to display that this weekend, too. It’s a really good attribute to have when you compete against people like Mo and the best in Europe.”