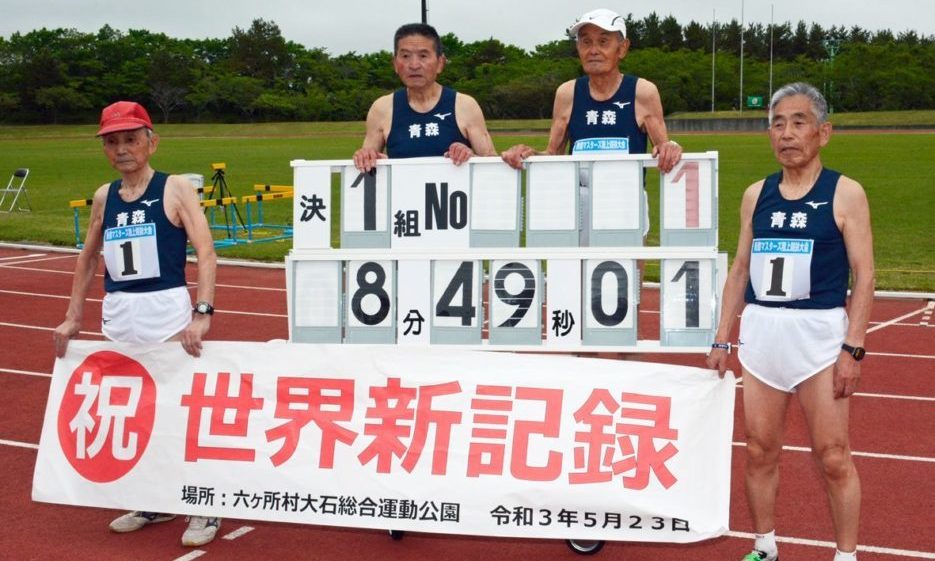 The four men had been training for the event for months and a large deal of the focus was spent on the baton changes.

With all of them aged 90 or over, who could blame them?

Starting in lane one, they had the entire track to themselves as a few spectators watched on to see if they could break the world record time.

By the time Tanaka, who was on anchor leg, took the baton, the achievement looked a foregone conclusion.

As soon as he crossed the line, he turned to the crowd and bowed before celebrating with Matashiro, Kudo and Mitsuya.

Tanaka told NHK: “Everyone was able to achieve the best results from their daily practice. I would like to continue participating in the tournament and set a new world record for the M95 category when I get to that age.”

The time set in Japan this weekend is therefore just under three minutes and 50 seconds quicker than what was set by the Americans at the USATF Masters Championships in Winston-Salem seven years ago.

To give you perspective, the time of 8:49.01 is just over a minute off the M85 world record, which was set by a German team of Eduard Bscheid, Herbert E. Mueller, Armin Zosel and Friedrich Ingenrieth two years ago at the European Masters Championships in Italy.

The four men won’t be competing in Tokyo but they have helped put athletics on the map in Japan ahead of this summer’s Olympics and Paralympics.