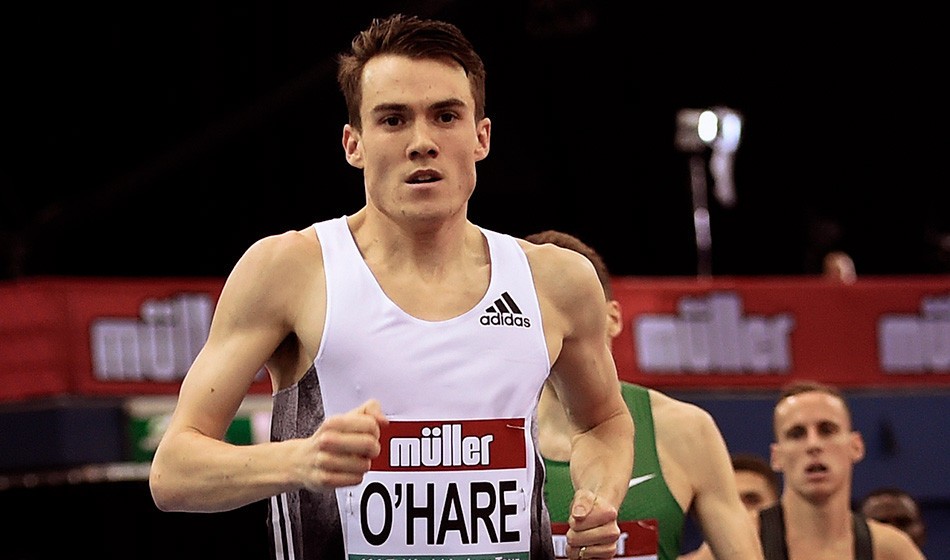 How difficult is it to combine a top-level athletics career with being a hands-on dad? Katy Barden talks to the European medallist about balancing fitness and family life

Chris O’Hare was trying to finish his session. Or, more accurately, he was trying to get it started. His four-month-old son Ronan, however, had a different plan.

“I had 4×1 mile then some fast stuff after,” he says. “I was only halfway through the first mile rep and he woke up screaming …”

O’Hare – who was preparing for the 2017 indoor season at the time – wasn’t just doing his wife Meredith a favour, or having a day of dad-son time. This was his new normal.

Meredith had returned to work after three months, by necessity rather than choice, and his athlete-husband role had evolved to include a full-time dad dimension.

“Other than track sessions, I did all my running on a treadmill in the living room with Ronan in his little seat next to me on the floor,” he explains.

“At first it was great because the noise of the treadmill put him to sleep and it was no problem, but within a month of me doing that and getting used to it, it became significantly harder because he was like ‘I’m awake, I don’t want to sit in this chair, I want to be with you, or I want out on the floor’, and he would just cry.

“I was often turning a double day where I’d do 8am and 4pm into one 11/12 mile run in the evening when Meredith got home from work.”

O’Hare’s track sessions, in the company of his training group and coach Terrence Mahon, took place once a week at Harvard indoor track, but he was soon left to train alone – with Ronan in tow – when they departed for an altitude camp.

Things were working well between father and son, though, and their respective routines appeared complementary.

“Ronan would always fall asleep in the car on the way there,” he explains. “I’d get him into his pram and, if I was lucky, I’d finish my session by the time he’d wake up. I’d change him, feed him his bottle, and then we’d go to the weights room to do lifts and I’d let him watch me in the gym.

“He was happy enough to watch me, until he wasn’t…”

His mile reps session already interrupted, O’Hare had picked his son up, settled him and figured he’d start again when the track’s janitor stepped in and offered to help.

“At first, I was like ‘no’, then I thought, ‘I really do need your help’, so he pushed him round the indoor track for the next 40 minutes or something.”

Life for O’Hare had definitely changed. 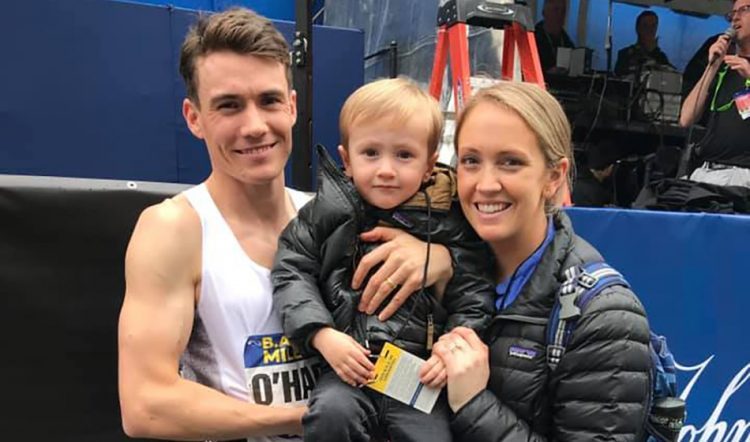 “Yes, being a dad is hard and being a dad as an athlete is hard, but that shouldn’t take anything away from what mums do,” he says.

“For a dad, for instance, when I think about women runners who come back from having children, I never had to sit out any time from my running. Yes, it made it inconvenient, slightly more difficult, but if I was motivated to do it, it was doable.

“My preparation in 2017 was more difficult than most other western world athletes, but my difficulties – they weren’t struggles – my hurdles to overcome were nothing compared to what female athletes, and even women who are not athletes, have to go through in bringing up children.”

O’Hare is a doting dad and acknowledges that his parents played a significant role in his own upbringing, instilling strong family values from a young age.

“Growing up, I never once thought, ‘where is dad, where is mum?’ They were always there,” says the 28-year-old.

“Sure, dad might have missed putting us to bed, coming home late from work, meetings and stuff like that, but he was always there all weekend and without fail to take me all over the country for track and cross country. I never once thought growing up, ‘oh, I don’t know if dad will be able to make it’.

“It’s only now I realise it’s because he made it that way, not because that’s how it was – and to do that for four children is no easy feat. And not just my mum and dad, but both sets of grandparents were always there, were always supportive.

“My preparation in 2017 was more difficult than most other western world athletes, but my difficulties – they weren’t struggles – my hurdles to overcome were nothing compared to what female athletes, and even women who are not athletes, have to go through in bringing up children”

At the end of 2017, when their son was a little over a year old, the O’Hares made the decision to relocate from Boston back to Tulsa to be closer to Meredith’s family.

“When Ronan was a baby it was fine, but once he was moving around he required more from us, it was almost impossible with running and Meredith working full-time.

“Moving has helped. The fact that it benefits Mere makes me happier. It’s also huge knowing that when I leave for training or racing that she’s got her mum and dad nearby for support.”

2018 was a big year for O’Hare with the World Indoors in Birmingham and the Commonwealth Games on the Gold Coast, but it was, by his own admission, a disappointing one.

In spite of running some quick times, including breaking his own Scottish national 1500m record in the Monaco Diamond League meet with 3:32.11, he says he messed up.

Being a husband and father had changed things.

“I’ve always wanted to make sure I was doing the right thing for my running, to make sure that I was ready for races, and in an attempt to make sure everything was physically 100% right as well as mentally in terms of being prepared for a race, we overlooked the general happiness level,” he continues.

“Last year was tough. I had injury issues at the start of the year that knocked on through the whole year. My foot injury that had ruined the World Indoors carried on and ruined the Commonwealths and, while being away is hard, it makes it harder when you’re not achieving what you went out to achieve, when you’re not justifying it.

“Collectively, I was away for almost seven full months last year. That’s too much.

“When I was in Berlin for the Euros I’d been away at that point for two and half months and we had another two weeks to hang around in Europe until the Birmingham Diamond League. By the time I got home I’d been gone three months.

“When you’re younger you just absorb all of these things, but you can’t possibly comprehend – or I couldn’t – how difficult it would be to be away from my son; it’s a totally different ball game when it’s your own baby.” 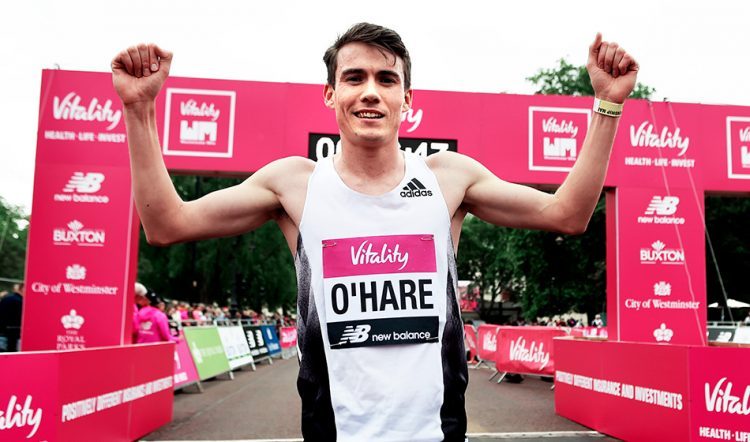 In addition to the strain of being away, O’Hare was also worrying about things he’d previously never had to give a moment’s thought to, like that fact Ronan was now spending more time in daycare rather than with him. That, he says, was tough for his wife, so in turn it was also tough for him.

“It’s those tiny little things that people don’t think of, they add up to being so emotionally stressful,” he says.

“While last year’s track season was somewhat successful in terms of running fast, in my book it was still a disappointment, an unsuccessful year, and I think it was because I was drained, as well as having been injured.

“That was kind of hard to grasp for me, for someone who prides themselves on just getting it done, toughing it out, to fail because I was emotionally stressed or emotionally tired. It seemed like such a pathetic reason to fail, but I’m not 18-19 years old anymore and I have the experience to be like ‘now we’ve identified the problem we can make sure it’s not a problem anymore’”.

As he prepared for the 2019 indoor season O’Hare adopted a new approach – one which saw him, as well as his training partners, skip their traditional altitude camp.

“I spoke to Terrence and said I honestly didn’t think it was worth going because the thought of leaving at that point was exhausting,” says O’Hare. “A couple of the other guys said the same thing, so the whole team decided to give altitude a miss and when I got to Glasgow for the European Indoors I was fresh as a daisy.

“I’d been away from home at that point for about two weeks rather than six weeks, and it was so refreshing to go into a major champs excited about competing and not just being excited to get home.”

The decision paid off, with O’Hare splitting the Ingebrigtsen brothers Jakob and Henrik, to clinch 3000m silver.

His year is now geared towards this October’s World Championships in Doha.

“I’m confident we can make it work outdoors as well,” says O’Hare, who opened his outdoor track season with a run of 13:48.66 over 5000m at the Payton Jordan Invitational and improved to 13:33.99 in Los Angeles last month before a win at the Vitality Westminster Mile (pictured above).

There will be challenges to overcome, of course, not least the late summer peak and the highly competitive nature of the men’s 1500m in the UK currently.

He also believes he has more to come in that event, but for now O’Hare is keen to keep his options open and hints at potentially doubling up in the 1500m and 5000m in the British Championships if he feels strong enough.

Arguably, however, his biggest challenge this year will be the arrival of his second child in July; “it’s going to be mayhem,” he laughs.

Tactically, though, he’s got the move covered.