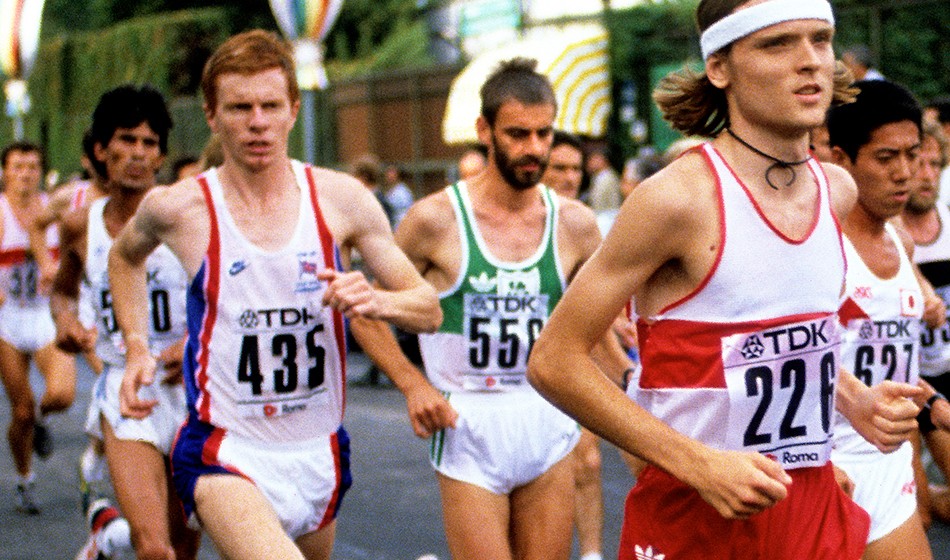 Former athlete Professor Kingston Mills says that with some innovation, running is a sport which could soon get back on track following the coronavirus pandemic

Former Irish international runner and immunology expert Professor Kingston Mills believes there is no reason why athletics competition might not be able to restart within weeks or months, but says event organisers will need to be innovative.

Mills ran for Ireland in the 1987 world championships marathon (pictured, 556) and is now professor of experimental immunology at Trinity College Dublin and head of the Centre for the Study of Immunology at Trinity Biomedical Sciences Institute, currently co-leading its Covid-19 immunology project.

In his view, running training is a low-risk activity when it comes to transmitting the coronavirus but the issue comes with the mass-participation and spectator elements of the sport. That’s not to say an athletics calendar will not be possible in the late summer and autumn, it may just look rather different.

“Certainly (running) training is a low-risk activity. There’s no question about that,” says Mills, who ran for Shaftesbury Barnet Harriers and appeared in the pages of AW in the 1980s, winning the Irish marathon title in 1986 and setting his PB of 2:13:55 in Berlin later that year. “Two or three people going for a run in the mountains or on a river bank is not a dangerous activity.

“The virus is transmitted by aerosols when you cough and sneeze so if somebody has the infection and doesn’t know they have the infection, they could pass it on to somebody if they are sitting in the same room as them, within a close proximity. But out running, the wind is going to blow away the virus very quickly and the chances of you picking it up are very slim.

“But a mass marathon, something like the London Marathon where there are tens of thousands of people congregating together, that’s a huge risk.

“Right now, mass marathons are not on. I think championship-type (elite) events could very well be run without any problem and sprint events up to 400m where you’re in your own lane on the track is not a major issue. I think the issue is around spectators.”

“Certainly (running) training is a low-risk activity. There’s no question about that”

Some events would be more feasible than others in that respect, he adds.

“Clearly right now we can’t have spectator events where there are thousands or even hundreds of people congregating, so if we are going to get back to competitive athletics I think it’s going to be initially non-spectator, which is easier to control in track and field than it is in road,” he explains.

“Although, in the days when I ran the 12-stage road relays down at Wimbledon Common, there were precious few spectators watching and we did it for the love of it! The spectators were the other club members that were watching you, so that wouldn’t pose a great risk.

“But something like the London Marathon, you can’t envisage the numbers that you get watching the London Marathon ever happening in the present circumstances. So I think the mass participation marathons are still a long way off but I do think that championship running is something that could return sooner rather than later.

“Even the most informed scientist has absolutely no idea where this pandemic is going to be in two months’ time.”

The Virgin Money London Marathon is among many events to have been postponed until later this year because of the pandemic. Having originally been set for April 26, the 40th edition of the race has been moved to October 4, while the World Half Marathon Championships in Poland has been moved to October 17. World Athletics also this week announced a provisional Diamond League calendar of track and field meetings for August through to October.

“Obviously, from the financial perspective, the mass participation is necessary for the organisers to make it a viable success financially,” recognises Mills. “I think that there is a very strong case to be made for some of these bigger city marathons to become elite marathons only in the short term.”

Travel is another major problem, he adds: “The big issue with the mass participation city marathons is the international travel to them.

“There is absolutely no doubt that the most dangerous activity you can take part in (when it comes to virus transmission) is flying. You are in a very confined space, you are in an area where the air is very low in humidity. High humidity represses transmission so in an area of low humidity, it is going to transmit easier. The other issue is that the air in aircraft is recirculated. It is filtered but unfortunately the size of the coronavirus is quite small and it is not guaranteed that the filters will take out something as small as coronavirus. So there is a real risk that you’re actually breathing in air if there is any one person in an aircraft that is infected.

“So for the London Marathon or other big city marathons, the big issue is travel as well as the congregation at the start of the race.”

In a recent interview with AW, sports manager Jos Hermens explained how he believed creativity would likely be necessary if an autumn road race season is to become a reality, with the former Dutch athlete offering ideas such as elite-only or time trial events.

Mills also believes that staggered start time trials could be a good option.

“It might not work on the track so easily, but I think it might work in road races – you could have a system whereby athletes go off at different stages,” Mills says. “In cycling, when you do a time trial, you allow each rider off at an interval. In running it could be 20 seconds.

“I think it would make for a great spectacle, in fact. To put the highest-ranked runner off last and the lowest-ranked off first, then you would have the best runner trying to catch the weaker runners in front of them. I think it actually might turn out to have very good times. They obviously wouldn’t be allowed for record purposes, but it would be one way of social distancing the start of a race and putting an interesting additional element that would normally not be there.”

Some countries have already announced a planned return of athletics action, including Ireland where limited club activity will be allowed from May 18.

Putting himself in the shoes of current elite athletes, Mills adds: “One thing I would be doing if I was an athlete right now, I’d be still training.

“I think that running actually is in a much better position than a lot of other sports because you can continue to train and keep a level of fitness. Obviously, what you haven’t got is the race sharpness, but that is going to come back with the first competitions that will be reintroduced.

“I would be hopeful that the race organisers should be looking at innovative ways within the rules of their country to get racing back within weeks or months.”

Waiting until a vaccine is available to resume sporting events is a “dangerous” principle, Mills believes.

“We have heard it said that the Olympics may not happen if we don’t have a vaccine,” he says.

“I think it’s a dangerous principle in which to base the resumption of the Olympics on.

“We may never have a vaccine. The chances are we probably will but there’s no guarantee. If we don’t and we have got rid of the pandemic by other means, such as suppression, why would we not have the Olympics? So I don’t agree with the philosophy of wait for a vaccine.

“I’m a huge believer in vaccines, that’s what I work on, but I don’t think it is the correct thing to say that you’re only going to resume a sporting event once you have a vaccine.”