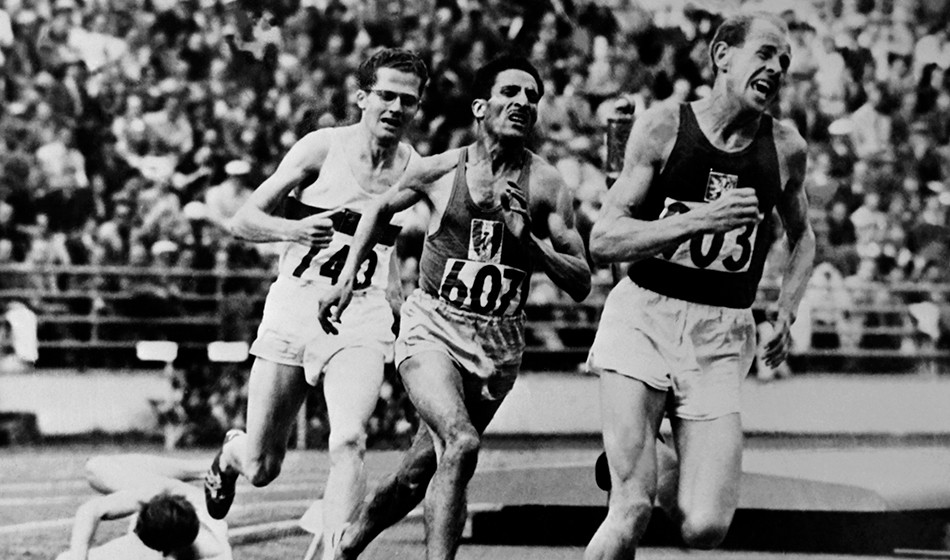 Part of a series on the most momentous occasions from the past 75 years to celebrate the diamond anniversary of AW, we reflect on the legendary Czech’s astonishing Olympic hat-trick in 1952

The western world was told he had tonsillitis. The reality was somewhat different. Emil Zatopek very nearly didn’t make it to the Helsinki Olympics of 1952 that would cement his place in sporting folklore, but it had nothing to do with ill health.

The Czech had missed the initial flight which carried his nation’s Olympic team to Finland because he was standing up for his friend.

At the time, the nation then known as Czechoslovakia was under Communist rule where opponents of the revolution paid dearly for their views, often with their lives during the purges and following show trials, or imprisonment in concentration camps. Going against the grain, therefore, was a particularly risky business.

As author Richard Askwith outlines in his book Today We Die a Little: The Rise and Fall of Emil Zatopek Olympic Legend, the father of Zatopek’s team-mate Stanislav Jungwirth had been imprisoned for political offences and the 1500m athlete was told he was forbidden from travelling to the Olympics as a result.

Upon hearing the news, Zatopek was incensed and the most famous member of the Czech team refused to go in protest. It was an extraordinarily high stakes gamble which did ultimately pay off as both he and Jungwirth did finally make the trip.

Zatopek, however, knew that making such a stand against the government meant that anything less than outstanding Olympic success could come with an exceptionally heavy price upon his return home.

“It’s such a significant story,” says Askwith. “The greatest runner of all time, in my view, about to go off to the defining Games of his life but, deciding to stick up for a friend as a matter of principle, he refuses to go. In the news reports at the time, they said he (Zatopek) had tonsillitis but in fact he just turned up a few days later.

“There was this huge pressure that he knew about but the public didn’t. He said once that ‘I fear that if I lose then I’ll be sent to prison’.

“He’d made a public commitment that he would win two gold medals and the 5000m was by no means assured. If he messed up he was going to be in big, big trouble.

“He wasn’t just going to go to prison – the concentration camps were really nasty in the early 50s and he had good friends who were in this uranium mine where you were made to mine uranium with your bare hands and I think the life expectancy was 42.

“It would have been very nasty for him.”

Typically of Zatopek, he did precisely the opposite of messing up. He went one better than his stated aim of 5000m and 10,000m victory and won the marathon, too.

It was a hat-trick that had never been done before and almost certainly never will be again.

By today’s standards, the winning times were not remarkable. The manner of the victories most certainly were.

On the closing lap of the 5000m, Zatopek was overtaken and sat in fourth place, facing a seemingly insurmountable challenge entering the final bend. From nowhere, however, came a surge of acceleration which overwhelmed the opposition and he hit the line in a then Olympic record of 14:06.6. The 10,000m brought with it another Olympic record, 29:17.0, as Frenchman Alain Mimoun was runner-up again, five seconds behind.

Then came the marathon. Zatopek had only decided to make his debut over the 26.2-mile distance at the very last minute and few gave him much of a chance – not just because of the toll taken by his previous races but because the field contained the then marathon world record-holder Jim Peters.

The Briton, however, was forced to drop out during the race and Zatopek – looking relaxed and seemingly enjoying every minute – took a vice-like grip on proceedings. With the capacity crowd chanting his name in unison as he entered the stadium, he crossed the line in another Olympic record, 2:23:03, finishing over two minutes ahead of Argentina’s Reinaldo Gorno.

There was evening more significance to Zatopek’s achievements than simply winning races, however.

“The thing that people probably don’t remember about the Helsinki Games is that these really were the Games of the Cold War,” continues Askwith. “You had a separate athletes village for the communist nations guarded by guards with machine guns and there was supposed to be no fraternisation between the two halves.

“But really it was just because of Emil’s charisma that all of this fraternisation took place. The people he raced against in Helsinki – athletes like Alain Mimoun, Hebert Schade and Gaston Reiff – they all became best friends for life and to me that’s as wonderful as winning those three medals.

“People who were there (as Zatopek completed the marathon) said it was a moment where it felt like the Olympic ideal achieved reality. It was the ultimate Olympic moment. It wasn’t about nationality, it wasn’t about politics, it was just about sport and the recognition that this was a once in a lifetime runner at his peak and everyone was celebrating it together.”