English Gardner: The name of the game 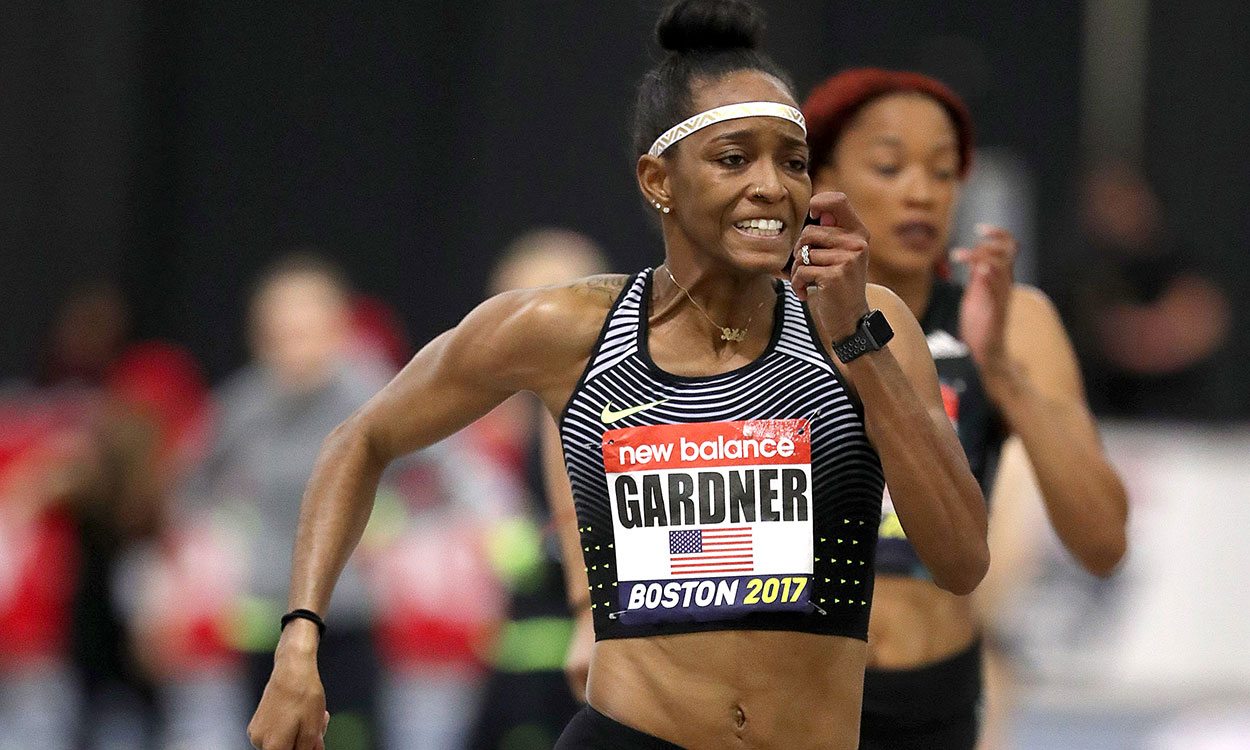 When writing about English Gardner, you have to start with the name! “English is always an eye-catcher,” she says. “When people see it, they ask why.”

She explains: “My mother had an epiphany that whatever she was carrying – boy or girl – was going to be great. So she wanted me to have a name that would stick with everyone, a name that you cannot forget. From then on I was English Gardner and I think it has served me well and is hard to forget!”

As well as a mother who named her memorably, she had a dad who was a runner. When she was seven, he took her to the Willingboro track club, a club started by Carl Lewis’s family. Like Lewis, Gardner is from Willingboro, New Jersey.

I first spoke to Gardner in June 2013 at the Paris Diamond League, shortly after she had won the 100m in the US Championships in 10.85. I confessed that I’d never heard of her before she had taken that title and wondered if that was a fair assessment of her. She was not offended, replying: “I’d say so. I never made a world team. I never made a junior world team.”

Those US trials were tough – with 11.00 not enough to make the finals. She said she had not gone into the event full of confidence, but “just kept my faith and ran my heart out”.

To non-Americans, the first three past the post system of the US trials seems brutal, but Gardner just shrugs.

“I really have no choice but to accept it the way it is,” she says. “It builds character. Just accept it and don’t complain about it.

“It’s just about producing your greatest performance on the day that matters. It’s really difficult and it is something every American has to go through and endure but at the end of the day that’s what makes it that much sweeter.

“When you get to the Games that’s sometimes the easier part and making the team is the harder competition. That I have won two American Championships is pretty amazing.”

In the 2013 IAAF World Championships 100m final, Shelly-Ann Fraser-Pryce won in 10.71 with Murille Ahouré second in 10.93 and Carmelita Jeter third in 10.94. Gardner was fourth in 10.97 and admits that, at the time, she was “a little bit upset about it” but “with hindsight I am pleased with it because I think I did a pretty good job in my first year as a professional.”

She qualified for the 2015 IAAF World Championships in Beijing, finishing second in the US Champs in 10.86, behind Tori Bowie. In Beijing she was carrying an injury and went out in the semi-finals.

“I knew I was hurt,” she recalls. “I had a torn hamstring and was pretty much going out to give what I could give. That was probably more disappointing than any other year because I knew where I was at in training but my body just wasn’t there for Beijing. As a championship meet that is probably the one that stung the most.”

“My mother had an epiphany that whatever she was carrying – boy or girl – was going to be great. So she wanted me to have a name that would stick with everyone, a name that you cannot forget”

She started 2016 well, winning the 100m in the US Championships in a PB of 10.74. She also won the 100m in the Prefontaine and Birmingham Diamond Leagues as well as coming second in Rome.

She headed to Rio as many people’s favourite but what few knew was that she was carrying an injury. “I haven’t fully disclosed what it was so I won’t say it, even now. That was basically what was wrong – bad day, bad time.”

Her time of 10.94 left her in seventh place in the final, although she was part of the gold medal-winning 4x100m team.

In the heat the US were initially disqualified but later reinstated, having being judged to have been impeded by Brazil. In a re-run of the heat, the US ran on their own as a kind of time trial, clocking 41.77 – faster than the winners of either heat – to reach the final. It was a strange experience to run with no opposition and Gardner remembers: “When we went on the track we said we were going to treat it like a practice.

“So we were pretty chilled, laughing, laid back – but we were nervous. We knew if we went out there and ran half as good as our ability we would make the final. On the track it was ‘concentrate, do your job and get it done’. And that’s what we did.”

“The way I would describe it is chaotic,” she says. “But I think that is what the first Olympics is for everybody. Everything
that can go wrong will go wrong and the experience builds you to be more successful in the next one. I had issues with travel, practices, food, a whole bunch of small things that can definitely throw someone off.”

Until now, Gardner has been seen as a 100m runner but that may change.

“For years my 100 metres, which has been the race I have specialised in, has been a little bit lacking and we’ve had a plan in order to get to a good spot. That time is coming up soon so you’ll definitely see me more in the longer stuff now that I’ve got the 100 under control!

“Running is a gift that I have been blessed with. It’s my heritage, my destiny, something I had dreamed about since I was a little girl. I give everything to it and desire to gain everything from it.”

She also sees it as an opportunity to give something back.

“The 10 seconds I run on the track, people are not thinking about their bills, illness or what’s bothering them. They are just concentrating on that 10 seconds. For me I feel blessed to be able to help people – to be able to touch people and give people hope.”