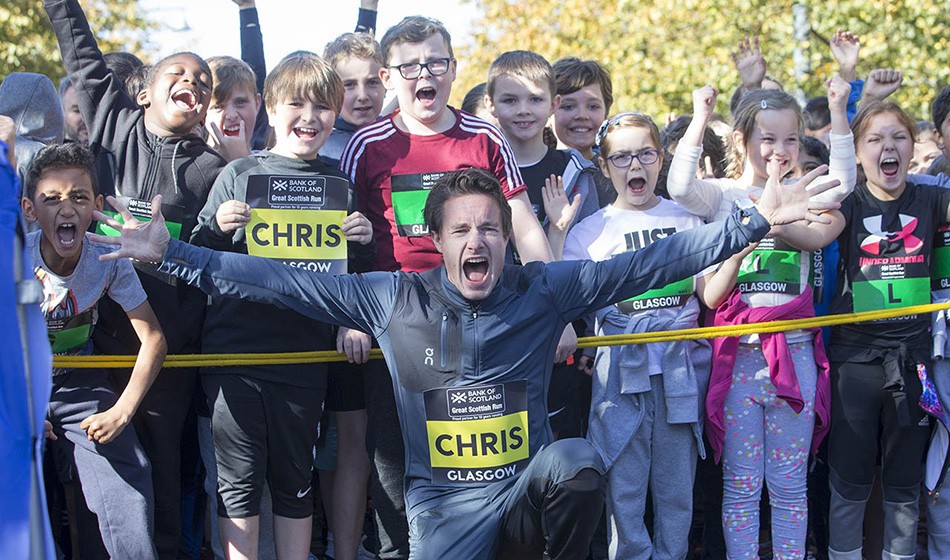 This time last year, Chris Thompson admits he was ready to retire. 12 months on, however, and the 37-year-old can barely contain his excitement as he returns to the Bank of Scotland Great Scottish Run – the race which stopped him from hanging up his racing shoes.

Following a poor performance at the 2017 Simplyhealth Great North Run, Thompson was very seriously considering his future in the sport.

His hopes had not been high when he toed the start line in Glasgow just three weeks later but the 10,000m European silver medallist from 2010 produced an impressive and convincing performance to beat Callum Hawkins and Tsegai Tewelde.

That victory provided just the spark Thompson needed. A win at the Simplyhealth Great South Run followed, as did third places in the Doha and New York half-marathons. His love for the track was also rekindled to the extent that he represented Great Britain once again over 5000m and 10,000m at this summer’s European Championships in Berlin.

Now Thompson has arrived in Glasgow not just eager for another taste of victory on Sunday but also to confirm that his preparations for the New York marathon at the beginning of November are firmly on track.

“The race that kicked things off was this one,” says Thompson, who won’t have Hawkins to contend with in Scotland this time but will face a field containing Tewelde, double Commonwealth marathon champion Mike Shelley, Andy Vernon, Jonny Mellor and another emerging Scottish talent in the shape of Luke Traynor.

“Before the Great Scottish Run last year I ran the Great North Run and it went badly. I remember lying in the tent after that race and literally going to sleep there thinking ‘I really should retire, this is getting silly’.

“You know in yourself and you’ll always spin a story of justification of good or bad runs but I was running so badly and I was lying there thinking ‘I don’t know if I can ever get back to anything (near the standards he had set for himself) and I’ve got too much pride to run poorly and be beaten when I know I’m a better athlete’.

“I was feeling like I wanted to retire but then a few weeks later I won the Great Scottish Run. On the start line I had no thoughts about winning the race – I just wanted to do the best I could – but I found myself in the lead and with a gap, then staying there and winning it.

“I was underprepared for that race – in the space of three weeks you don’t get really, really fit but you start to tap into your potential and I thought ‘crikey, did I just do that?’.

“I’m now in a position where I’m excited about what I might be able to do rather than feeling ‘can I get through this?’.

“Winning in Scotland last year kicked off that belief that I still had something worth fighting for. Winning a race like this means a lot and to have Tewelde and Callum in there – they’re no slouches – you take a lot of pride and satisfaction from it. If I’d won that race and the next person had run 67 minutes then I’d have been questioning myself ‘was it a good run or not?’ but you know it was a good run when you look at the results.”

Thompson clocked 62:44 for victory in soggy conditions last year, with Hawkins and Tewelde both running 63:18 as they battled it out over a sprint finish on Glasgow Green.

“I’m sure last year’s memories will come flooding back to me and hopefully they’ll see me through,” adds Thompson.

“I have three things in my mind that I’d like to get from the weekend. Primarily you want to be healthy, to be able to keep going with the marathon training, secondly I’d obviously love the win and to defend the title and finally it would be a real stamping of authority in my performance in my own mind that I’m on the right track.”

Bahrain’s Chelimo and Ethiopia’s Dibaba claimed their world titles in 2017 and 2015 respectively and will be joined in the contest by last year’s third placer Fionnuala Ross, as well as Scot Susan Partridge.

Britain’s Gemma Steel will warm up for next month’s Commonwealth half-marathon championships by contesting the 10km in Glasgow, while home favourite Sammi Kinghorn features in the wheelchair event.

The Bank of Scotland Great Scottish Run will be broadcast live on BBC Two and BBC Two Scotland from 11:00.