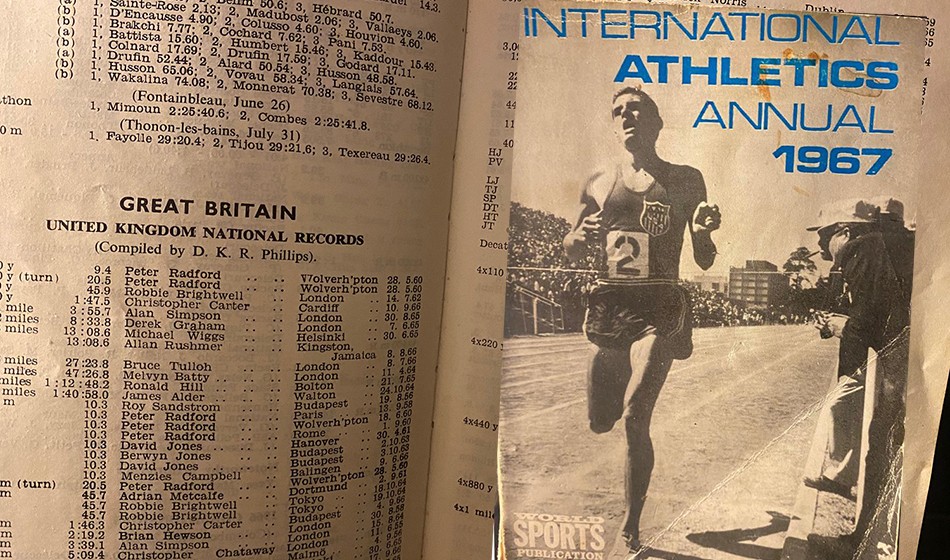 1966 will be best remembered by British sports fans for England winning the football World Cup final at Wembley but it was a year that also included a European Athletics Championships and Commonwealth Games.

I recently came across the World Sports International Athletics Annual 1967 which reviews the 1966 season and it includes some fascinating information which shows just how much athletics has changed over the last 54 years.

Curiously, there were women’s world lists and all-time rankings, and women’s results from the European Championships and Commonwealths, but also a list of all national records and national championships, only for men!

That women were not considered equal back then was further illustrated by that year’s European Championships, with there being no events over 800m (for example no 1500m, 5000m, 10,000m, steeplechase and marathon) and no 400m hurdles, pole vault, triple jump, hammer and 4x400m relay.

The list of British record-holders is a very interesting snapshot of the state of British athletics at that time.

The men’s 100m record was a modest 10.3 – there were no electronic times then! And it was shared eight ways.

Roy Sanderson set the first time in 1956 before Olympic medallist Peter Radford equalled it in 1958 and also ran it twice in 1960.

The 200m was more straightforward as it was Radford’s 20.5 from 1960 which was set at the same meeting in Wolverhampton where he also set the 100 yard and 220 yards records.

There was also a share at 400m. Future commentator Adrian Metcalfe ran 45.7 as a junior in 1961 and then Robbie Brightwell equalled it in both the 1964 Tokyo Olympic semi-final and final.

Chris Carter held the 800m (1:46.3) and 880 yards (1:57.5) records, with the metric mark coming when he finished a very close fourth in the European Championships. Carter has been involved in the sport now for 70 years, having become a top administrator and official when he retired and his son Richard became a national junior winner.

Gordon Pirie owned the 3000m mark with a 10-year-old run of 7:52.8, which was a world record at the time and was still eighth all-time in the world. It was not the oldest individual British track mark as Chris Chataway had a more modest 5:09.4 for 2000m.

Mike Wiggs had the 5000m record with 13:33.0, which at the end of 1966 ranked him sixth all-time, and he had a share of the three miles with 13:08.6 alongside Allan Rushmer’s Commonwealth bronze medal-winning run in Kingston behind the great Kip Keino and Ron Clarke and narrowly ahead of future Olympic champion Naftali Temu. Both Wiggs and Rushmer were in the all-time top 10.

Bruce Tulloh held the six-mile record with a similar sort of time of 27:23.8 which ranked him sixth all-time based on his run in that year’s AAA Championships at White City.

The steeplechase record of 8:32.4 was Maurice Herriott’s Olympic silver medal-winning run in Tokyo.

To read about the other British men’s records at longer distances, field, hurdles and relays, AW magazine subscribers can visit the AW Clubhouse here.